The CentriFury and Simon: Violence Edition

Back in January, we visited some of our customers to see what their Free Day experience was like. We traveled to Connecticut, Rhode Island, Texas, and Virginia and visited some awesome people, companies, and hackerspaces. One of the groups we visited is an outfit called North Street Labs in Portsmouth, Va.. Recently, our friends at NSL built an entry for the RedBull Creation Challenge - The CentriFury! 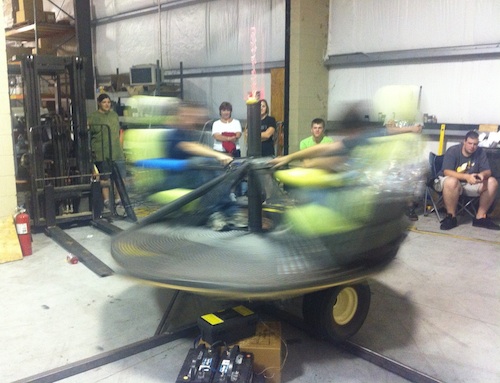 Basically, two users compete against each other to see who can withstand the highest G-force. Each player straps in and as the CentriFury begins to spin, they must hold a button. The first to let go loses! It's a pretty fun little project that they built in only 72 hours. So far, they have measured The CentriFury to top at out 4.3 Gs. If you want to see a video of it in action, check out the Red Bull Creation project page - and if you like it, give it a vote! However, this wasn't their only entry - they also built another creation - Simon: Violence Edition. Check out the video!

As you know, we here at SparkFun are big fans of Simon. To read more about Simon: Violence Edition you can check out their webpage!

Playing Doom on the Raspberry Pi