Another One Bites the Dust

With the speed that technology changes and advances, products can't be expected to remain on the market forever. But what happens when a product's retirement interferes with your project?

For this week’s entry, I had been planning a tutorial and project build based on an IMU. For those of you who may be relatively new to electronics, IMU stands for Inertial Measurement Unit, and they are used to measure specific force, angular rate and, depending on the chip, also magnetic field. It accomplishes this by using accelerometers, gyroscopes and magnetometers. For years, you would have needed three separate chips on your board. As technology continues to improve and shrink, it is now generally more cost-efficient for manufacturers to combine all three sensors into a single chip, with footprints in the area of 3.5 x 3 x 1mm, as is the case with the LSM9DS1.

Thanks to their diminutive size, IMUs can be found everywhere you look - aircrafts and UAVs, gaming controllers, phones, space heaters, satellites, watches, VR goggles. Why, without IMUs, we never would have gotten to watch a chimpanzee riding on a Segway.

So I worked on my project and accompanying tutorial, and all was going well, until I learned that the IMU I was using has been EOL-ed. Again, for those who might not know, EOL stands for End Of Life, and it’s the term used when a manufacturer terminates production of a component. 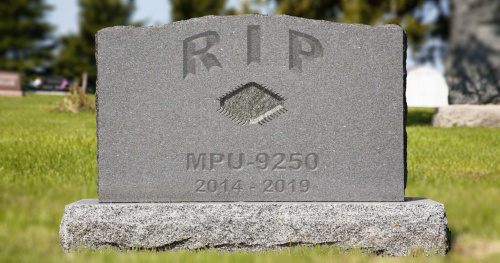 So what does this mean? Well, it will mean different things for different people. For most of us, it’s really no big deal. We may not even realize that a product has been retired until we pull that one board or chip out of our collection, start to build a project around it, and only when we go to re-examine its specs online do we learn of its demise. We can most likely continue happily with our project, and it will work perfectly for us for years.

Slightly worse is when you’re planning to repeat your build, whether it’s to place multiples of your amazing project around your home, share them with friends or colleagues or, worst of all, if you’re planning on custom-made gifts for everyone in your family. Learning too late that you can only get enough chips to make gifts for eleven of the fifteen members of your family can create a real pre-holiday Sophie’s Choice.

The third and definitely worst-case scenario is when you’re prototyping a design, trying to bring a product to market. I can clearly remember a couple of times during my tenure in SparkFun tech support when customers had been using certain chips for a board they were planning to send to production. One in particular had spent about a year on the design, revisions and firmware. He felt he finally had it exactly how he wanted it, only to learn that the manufacturer was retiring the chip around which his product was based. This can be an annoying setback to a medium or large company, but for any entrepreneur or small business, it can be devastating. To spend a year developing a product, counting on that product’s future revenue to recoup your development costs, only to have it evaporate shortly before you go to production can be catastrophic.

Now this is in no way intended to scare anyone. The rapid progress and growth we’ve witness in the tech industry, epsecially in the last decade or so, is, and should remain, absolutely thrilling! Look back at Jeff Han’s TED Talk from 2006, entitled - get this - “The radical promise of the multi-touch interface” (emphasis mine). When we listen to the crowd's awed reaction when he places two fingers on the screen and zooms in on a picture, and we realize that this radical technology is now as ubiquitous as indoor plumbing, we can’t help but remain excited for what we might be able to do a decade from now. However, if you are planning large runs, or a long-term design based on a particular chip or sensor, it’s always good to be aware of where the component might be in its life cycle, and what similar components might be available. You can always check the news coming from companies like Invensense, Bosch and ST Microelectronics.

Of course, some EOLs are celebrated more than others. (SparkFun Viking Funeral, 2011)

As for me, this was a minor annoyance at best. I had spent a couple weeks designing a project, coding it, designing and printing a custom 3D enclosure and documenting it all for a build tutorial, but now there’s no sense in me sharing instructions for something that others won’t be able to build. I’ll find a suitable replacement component, do a little re-design, tweak the code and in a few weeks, release the new and improved version of what I had planned to release today. Had I just been building this project for myself, there would have been no effect on me at all, but there is an important lesson here for me, and for all of us who tinker, hack, make or manufacture.

With the speed at which technology is improving, product design is changed fairly regularly. Major components, like the Atmel 8-bit AVR series, or the ARM® Cortex®-M0+ chips, should be around for years to come. But with smaller components like sensors, the turnover seems to be a bit quicker. Still, at the very minimum, you can expect any sensor to remain on the market for at least three years before an EOL announcement is made, and even after that, availability may last for another year so. So don’t be dismayed or timid about using something in your project, especially if, as is the case for most of us, it is a one-off. Products change and grow, and we all need to be flexible and creative enough to be able to have our projects and products grow with them.

Get Heavy and Humid with this DIY GPS Humidity Tracker