Check out the details from the SparkFun Viking Funeral.

Earlier this month, at dusk on a Wednesday, a small crowd gathered near the pond to the east of SparkFun HQ. They were there to celebrate the symbolic death of 5 SparkFun designed boards that had historically given the assembly team fits. Months before, the various members of the Production department had identified those designs that gave us the must frustration and then narrowed that list down to a Top 5. Ultimately, we decided that the LilyPad Vibe Board, PicoBoard, RooTooth, 5DOF, and nRF Ant Stick were in need of improvements to improve the ease and efficiency of assembling each of these. And, by consequence, we hoped that the months and years of assembly pains associated with these 5 designs would dissipate as we sent the SparkFun Viking ship "out to sea".

As some of you may have already realized, we are still actively selling each of these boards and many are probably wondering what the future holds for each design. The assembly pain points of each design are currently being addressed on all 5 boards and 4 of the 5 are undergoing board layout revisions. Logistically speaking, when we run out stock of the current versions of each PCB, we will not build them again until the new revision of that design is complete and ready for production. So what needs to happen for each to be reincarnated and welcomed back within the good graces of the SparkFun family?

The PicoBoards have already survived their journey from life to death and back again! Ever since the first production run of Picos, we have struggled to meet our high quality standards on these because of the slider that we were populating the boards with. The packing grease in and on the sliders would get onto everything during PicoBoard assembly. This led to us needing to clean the boards multiple times throughout the assembly process. So we contacted our slider supplier to ask about the grease. Turns out they were manufacturing the sliders with two different types of grease. And they agreed to cut out the use of the grease that was leaking out onto everything. Problem solved. 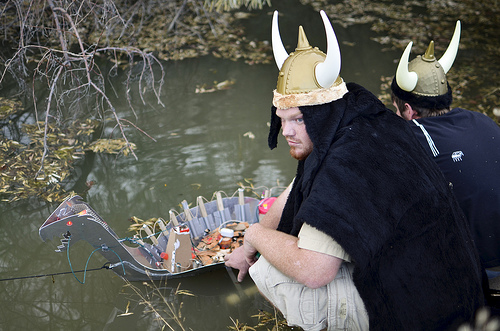 Preparing the ship to set sail.

The trouble with the LilyPad Vibe Boards was that the vibration motors we used were extremely time consuming to populate. Stripping the two wire leads of the vibe motor and then soldering them to the PCB was a slow and delicate process given the small gauge of the wire. Not too challenging if building a dozen or two at a time. But when you are asked to build up a few hundred of them, that step begins to seem quite inefficient. So we have gone hunting for a better vibe motor and have officially settled on an SMD version that we feel will immensely improve our LilyPad Vibe Board builds! The board redesign to accommodate an SMD motor is actively underway and should be revealed before long.

Our relationship with our old friend, the RooTooth, has forever been one consisting of equal parts love and hate. On the one hand, they are incredibly fun to test out once fully built (you get to wireless drive around a Roomba!). But wiring up the miniDIN-8 cable to the PCB and then enclosing that assembly has always been a troublesome step for us. We are, admittedly, not cable assembly experts at SparkFun. And have never put a great deal of effort into perfecting our cable work because we don't utilize cables in many designs...at least not cables that are directly soldered to a PCB. But inconsistencies in the way these cables have been built and delivered to us by our supplier in the past have compounded the challenges that we face in assembling a solid RooTooth. That said, we still believe that the quality level of our cable work is high. But we aren't as efficient as we could be in wiring up a cable to a board. But the new cable assembly that our resident mechanical engineer designed and is now being built for us is going to drastically improve both the speed and the quality of future RooTooths built at SparkFun! 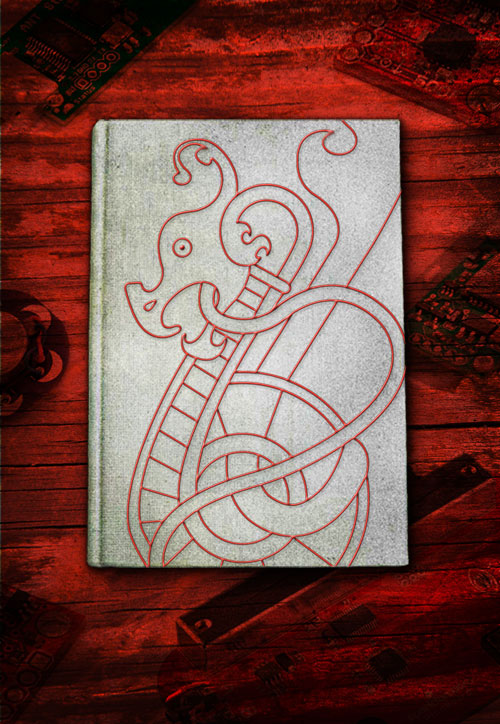 So what did we not like about the 5DOF IMU board? For a long time, we have experienced issues in getting a significant percentage of the on board IDG500s of most 5DOF production runs to engage and function after reflowing. And, finally, after some crafty detective work by our QC Manager, we discovered that our IDG500 footprint on the PCB was the cause of the inconsistencies we were seeing from one board to the next. We were still finding ways to produce incredible final yields of these builds, but not before putting many of the boards through an extensive rework cycle. But now we know the root cause of the problem and the board redesign is nearly complete! Too bad it took us "forcing" the design into retirement to finally discover where the true problem lied. But it's great to finally have the problem solved! 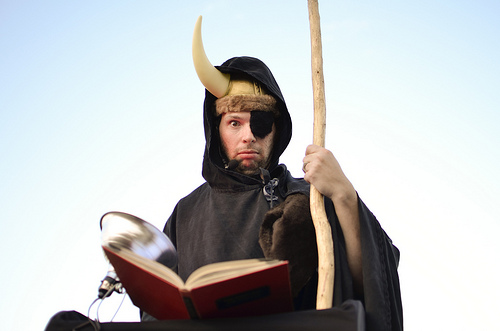 Evan - the Administer of Death.

And, lastly, the nRF Ant Stick was giving us trouble during testing. Basically, the boards were rarely enumerating properly on a COM port and would appear as (another) Microsoft serial ballpoint (mouse). The tester's mouse would go all wonky, and they would have to try to delete the extra mouse (if they could manage to click it with your mouse acting up). This was caused by the FTDI trying to communicate to the computer and the other IC on the board at the same time. To fix this issue the board has been redesigned to incorporate a reset button which holds the nRF in sleep to allow the FTDI to enumerate properly. Also, after learning the lesson with the IDG500 footprint, the redesigned Ant Stick includes a new footprint for the nRF chip to reduce the possibility of reflow errors.

The Viking funeral was an incredibly fun way to address frustrations felt in the production process! We are also always in search of an excuse to throw on costumes and give our musically gifted employees the chance to jam. And Evan, one of our kitters, did an incredible job as the acting Administer of Death at the funeral! I'm actually afraid to go near the guy now. He was that convincing. And now we have a small viking ship on display in the production shop which I'm proud to say was built by Tyler, one of our pick and place operators, and Eric, one of our lead assembly technicians. All in all, our version of a Viking funeral was sufficiently wacky and wonderful...and still somehow productive. Until the next one, we will continue to find ways of keeping designs from being sent to Valhalla...!