Sam Berrada dropped by to show off the sign language to speech system he designed. Did we mention he's in the 8th grade?

We recently had a celebrity visit us at SparkFun. Sam Berrada, an 8th grader from Pleasant View, Colorado - a small town on the western slope of the Rockies - had just won multiple awards, including First Place in Engineering (Junior Division) at the Colorado State Science Fair, for his project: The Future of Sign Language Translation and Universal Digital Control. He stopped by SparkFun after the awards ceremony to show us his creation. 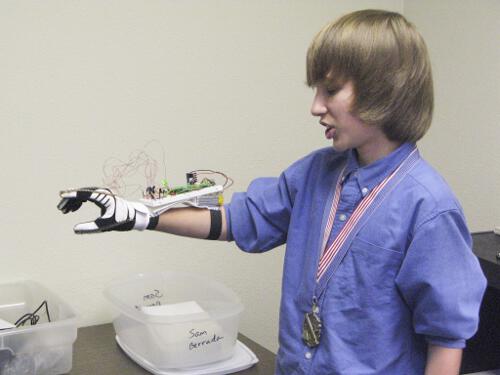 Sam’s project translates sign language into spoken English. It’s divided into two parts: An Arduino-powered glove uses flex sensors to measure finger positions, and an accelerometer to measure arm angle (Sam tells us that without this extra measurement, several letters could easily be confused with each other). The raw measurements are sent wirelessly to a base station via XBee. The PIC-powered base station receives the data from the glove, displays the individual finger positions on a LED matrix, determines what letter is being signed (using “a LOT of code” says Sam), and then both speaks the letter using a SpeakJet chip, and displays the text on an LCD. 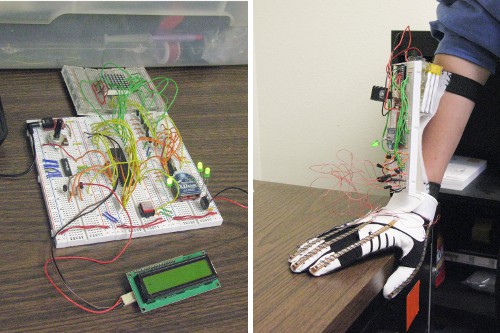 We’ve seen projects like this before, but Sam’s was particularly impressive, especially given his age (did we mention he’s in the 8th grade?). Sam says he’s been building electronic projects for years, and has a fondness for robotics. He was inspired to build this project after interacting with a deaf employee at his school, and wanted to create something that would help the hard of hearing more easily communicate. 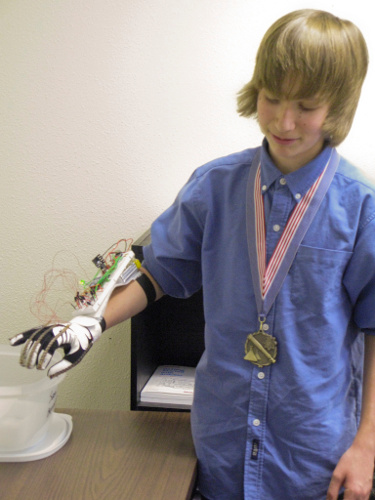 After winning awards for his project at regional and state levels, Sam has been invited to enter the nationwide Broadcom MASTERS Competition (Math / Applied Science / Technology / Engineering Rising Stars) this summer. We wish him luck, and are sure we’ll be seeing many more creations from this talented engineer in the future!