What does it take to get complete biometrics in your garage?

This past Christmas, some of the most popular gifts were "fitness bands" like the Fitbit, the Jawbone Up, and the Nike Fitband. The bands were sold out at retailers all over the country and appeared on just about every online gift guide out there. In my own gift-giving adventures, I researched these fitness bands to see what all the hype was about. What I found was that these products are essentially a re-packaging of technology that has existed for decades: a pedometer and heart-rate monitor in a wristwatch. Which led me to ask, why are these so popular? 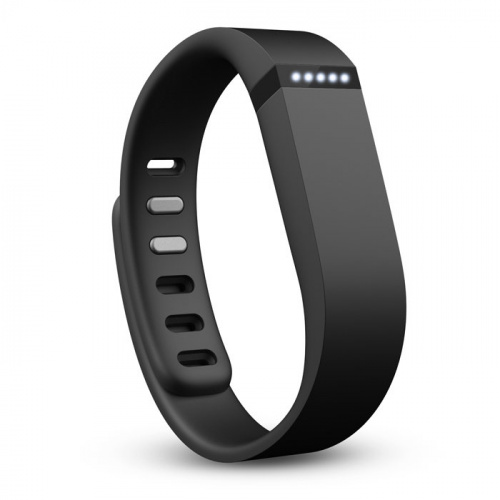 Does everything except tell the time.
Image Credit: brookstone.com

The answer I came up with is two-fold: first, the phone app. People want the ability to track and record their activity levels in a convenient and attractive way. Second, unlike older technology, these bands are usually able to give the user some sort of metric that a simple pedometer and heart-rate monitor cannot; calories, stairs climbed, "overall health," etc. This is all well and good for the average person that wants motivation to stay active, but it comes with a huge flaw: if the user is doing something other than day-to-day walking and stair-climbing, the device can no longer accurately track the "fitness" of the person to which it's attached. In other words, if you go to the gym and exercise, the fitness band can no longer accurately track the metrics the user needs for motivation.

Don't get me wrong, I don't mean to say that these fitness bands are a bad product or silly. In my opinion, anything that motivates people to be more active and physically fit is probably a good thing. But this got me thinking about a theoretical "true" fitness meter. What would it take to build a device that a person could wear, let's say the size of a watch, that would read out his or her physical "stats" at any time to a cell phone. Stats that one would receive from a doctor after a physical, mixed with blood composition, mixed with respiratory efficiency, mixed with overall strength etc. etc. As of now, there is no easy answer for this. There is no such thing as a device that I can jam into a wristwatch that will tell me my respiratory efficiency, and I sure as hell am not going to be walking around with the machinery to do so strapped to my face.

So what exactly can we measure? What kind of biometrics can we get and how can we use this information? This is a popular subject in the DIY electronics community right now, and it will be popular for as long as people are interested in measuring their own bodies (read: forever).

Let's start with the easy ones:

Measuring heart rate is relatively easy. In the case of an electrocardiogram, sensors are placed on the body that detect the electrical signal produced by the heart when polarization or depolarization of cardiac tissue occurs. This is utilized in polar heart-rate chest bands, which can be interfaced with DIY electronics. Sensing heart rate can also be done optically, usually by placing an optical sensor on the fingertip. 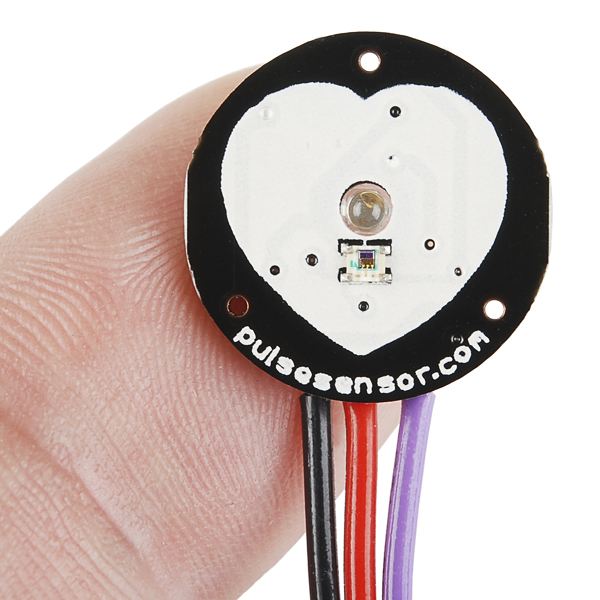 These sensors are cheap and already small enough to fit into a wristwatch. Using heart rate as an input can yield a lot of interesting projects, such as the critical corset.

Sensing movement for biometrics is no different than sensing movement in anything, and is usually performed with the use of an accelerometer. Older or cheaper pedometers were mechanical, with a pendulum or weighted reed switch contacting with the force of each step, but in the case of the fit bands, an accelerometer is used. The accelerometer data is analyzed to detect the acceleration profile of a step, which is generally consistent in most two-legged humans. The sensors are relatively small and cheap, the difficult engineering falling in the analysis of the accelerometer data. It can be difficult to derive a "step" from the noisy data produced by the total acceleration of a human being.

Elevation is another relatively simple metric to procure. Although it is not technically a biological metric, it is an important measurement when analyzing activity. It is normally sensed through the use of a barometer. As elevation increases, air pressure decreases, and these changes can be easily sensed to a surprisingly accurate degree by a barometric pressure sensor. This is the method by which most commercial fitness bands measure "stair steps." Rather than try to detect a stair step by analyzing the accelerometer movement profile of a person walking up the stairs, the device senses the relative change in barometric pressure from one floor of a building to another. When it detects that the person has increased in elevation about the height of a single floor of a building, it multiplies the number of floors climbed by the average number of steps in a one-floor staircase. This is all well and good, but may present a problem when the person uses an elevator, or in rarer cases, rides a rollercoaster. 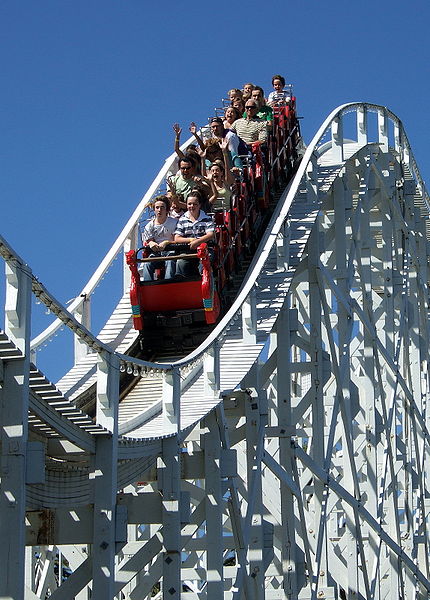 These metrics are all relatively simple. The equipment to measure them is freely available and accessible to the average person. Let's dig into some of the more specialized metrics:

Electromyography is a technique used to detect the electrical activity produced by skeletal muscles. It detects muscle activity by measuring the electrical potential produced by muscle fibers. The more the muscle is contracted, the higher the potential produced. Electromyography is normally used to diagnose muscle disorders, as a damaged muscle will produce non-standard results under tests. From a DIY biometrics standpoint, it is an easy way to detect if a certain muscle is being utilized. Electromyography is a quick route to some fun biofeedback projects, such as this one by Advancer Technologies.

Skin conductance is the nature of the skin to become more or less conductive in response to a stimuli. Generally, the more aroused or agitated one is, the more conductive one's skin becomes. For this reason, skin conductance tests are one of the factors commonly used in lie detector tests. It is also the phenomenon being measured when using a Dianetics E-meter. 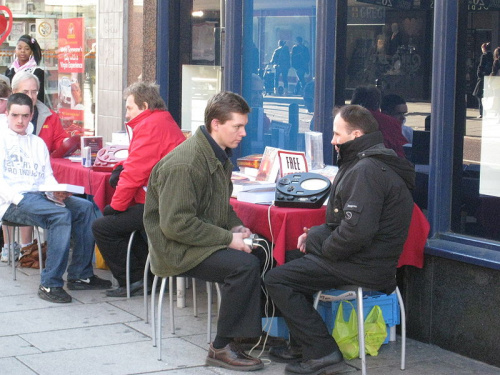 Skin conductance is an autonomic trait, meaning that it is involuntary and changes based on the state of the body. Higher stress, higher skin conductance. It's another biometric that's inexpensive and easy to detect, so we'll shoehorn it into our theoretical wristwatch as well.

And now on to the nearly-impossible-in-a-wristwatch metrics:

When you give blood at the doctor's office, the blood is tested for many chemical levels and metrics that provide a good deal of biometric insight. The blood is tested for chemical ranges, cell count, cell volume, type, and any number of abnormalities. Having constant access to blood chemistry data would be mighty handy when making fitness choices like diet, exercise, and sleep. Unfortunately, in order to perform such blood work, one requires, well, blood. And that's no fun. Not to mention the entire laboratory that is required to perform such a full run of tests. All told it's just way to much to fit into a wristwatch. Not all is lost however; modern science is working on ways to do just that. It's not cheap, it's not comprehensive, and it's not available to DIY'ers, but it's a step. 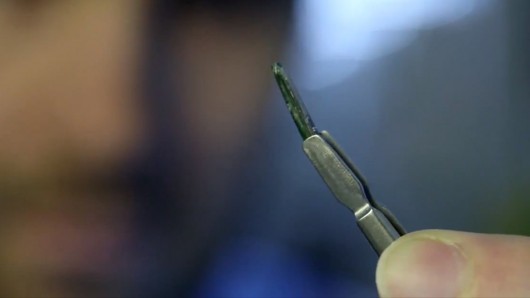 When making dietary choices, it would be beneficial do know just how well you digest certain types of food, or if you're deficient in certain dietary areas. Levels and types of bacteria in the gastrointestinal tract can yield a wealth of information about a person's overall health. Unfortunately, this is where biometrics gets a little...uncomfortable. The best way to analyze digestion is through analyzing what is not digested in the form of a waste sample. For this reason, no one that I'm aware of is doing real-time digestive analysis in a DIY fashion (I also refuse to google "DIY stool analysis"). The tests are complex and somewhat costly. And gross. However, there is a project called Human Food, somewhat similar to the 23andme DNA project, that will analyze your personal "digestive sample" for microbes and send you a report on your personal ecosystem. It's still a long way from a wristwatch readout.

Respiratory efficiency tests tell you how well you're converting the oxygen that enters your lungs. The actual metric that is used to analyze this is the ratio between the amount of carbon dioxide and oxygen consumed in one breath. It is a good measure of overall respiratory health. In theory, all one needs to perform this test is a carbon dioxide sensor and an oxygen sensor, which is accessible to the average DIY electronics enthusiast. However, while the presence of CO2 and O2 are easy to detect, accurate measures are not. When you get a physical, the doctor may perform a VO2max test. This measures the O2 and CO2 levels of the breath while performing an activity. It looks like this: 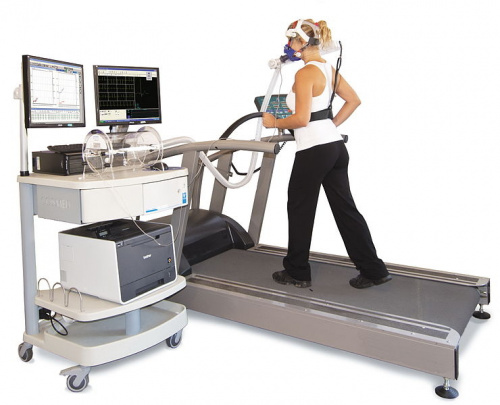 Add that to the wristwatch.
Image Credit: wikipedia.org

One can buy a consumer version of a VO2max machine, but it's not cheap, and certainly not very accessible for the DIY biometric electronics hobbyist. Plus you would have to wear a big goofy mask all of the time to get a constant readout. So this is out of our wristwatch as well. For now...

As I said before, biometrics is a hot topic in DIY electronics right now. In particular, the Bitalino is a development board that is tailored to measure heart rate, muscle activity and skin conductance, all for relatively cheap. 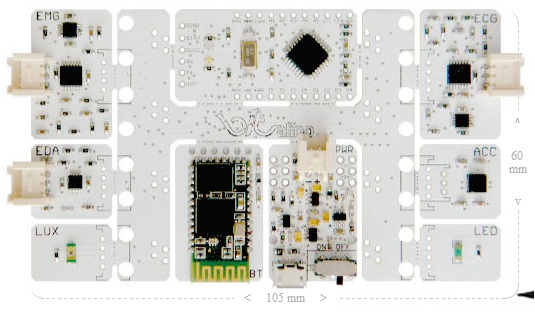 It's not too difficult to have this board transmitting real-time measurements directly to a "stats board" on your phone. So while we may not be able to measure all of the useful biometrics that the body produces, we are currently able to self-measure metrics that were once only accessible when sitting in a doctor's office.