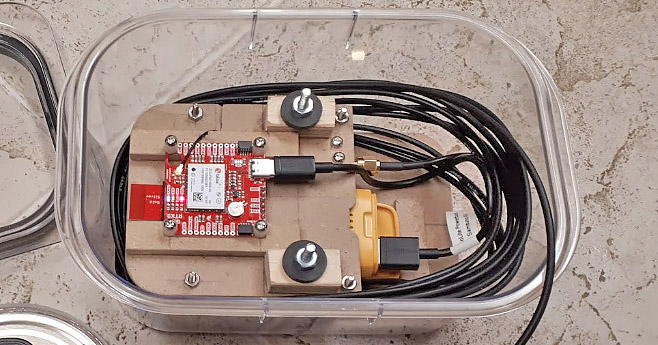 Bridging the gap of price and accuracy

“There is a program called OpenOrienteering Mapper which runs on PC, Mac and Android,” he said. “The Android version shows your position on the map, based either on the device’s internal GPS, or preferably a more accurate external receiver connected by Bluetooth.”

Bayly had been using a single-frequency GPS-Glonass receiver that was usually accurate to less than five meters for several years. However, adjustments were often necessary due to variations in the positions observed at different times. When he started researching more accurate GPS receivers, he found that it cost tens of thousands of dollars for a centimeter-accuracy RTK instrument, and that even a one-meter accuracy GIS instrument was around $2,000.

That’s when he found the SparkFun GPS-RTK2 Board - ZED-F9P (Qwiic). At a cost of two hundred dollars, with 10-millimeter, three-dimensional accuracy, and rover and base station operations, Bayly was intrigued. Initially, he thought the lack of UNAVCO base stations in Canada would make the board impractical to use. However, as he researched more, he learned about the BKG NTRIP service and its base stations all over the world - including in Calgary, where he lives. That’s when he decided to give the SparkFun GPS-RTK a try.

“As SparkFun recommends, I am using the Lefebure NTRIP Client app on my phone,” Bayly said. “It functions as the Mock Location Provider for the OpenOrienteering Mapper app. I expect the RTK2 receiver will have precision around two meters when operating standalone outside of cell coverage." 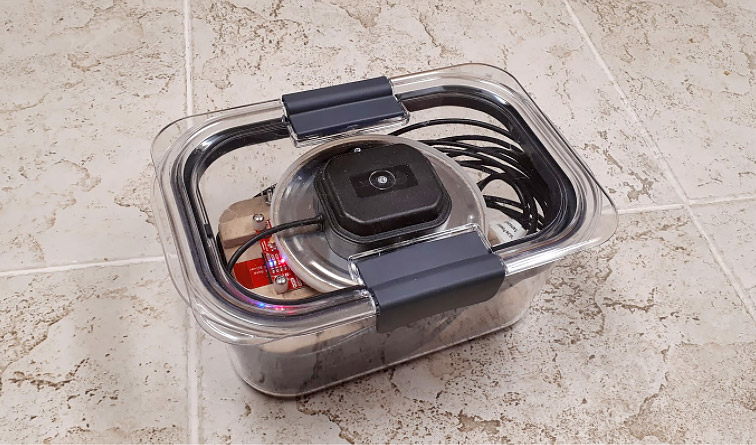 Portable GPS system designed to be carried in a daypack

Thanks to SparkFun’s videos, set-up guides and other documentation, Bayly was able to assemble a portable system (pictured below) to be carried in the top of his daypack. The chassis is made from eighth-inch MDF in a snap-lock, water-tight Rubbermaid container. The four-inch diameter ground plate is from the end of a powdered drink container, and the matching plastic lid underneath prevents accidental shorts. The system is currently powered by a 5200 mAh USB power bank, though he plans to try a smaller, lighter one soon.

“I understand that the u-blox ANN-MB-00-00 antenna is sensitive to the L1 and L2 frequency bands, and is therefore the most suitable antenna for the U-blox ZED-FP9 receiver,” he said. “If I had confidence about putting SMA connectors on cables, I would cut the antenna cable shorter.”

“As SparkFun recommends, I am using the Lefebure NTRIP Client app on my phone,” Bayly said. “It functions as the Mock Location Provider for the OpenOrienteering Mapper app. I expect the RTK2 receiver will have precision around two meters when operating standalone outside of cell coverage.”

Once he put his design to the test, Bayly found that the nearest BKG base station was less than two kilometers from his house. While some corrections come from a different base station about 500 kilometers away, he found his receiver was still getting sub-meter precision – quite an improvement over his old system!