When Adam Garbo of the Water and Ice Research Laboratory at Carleton University saw a lack of data coming from the cryosphere, he turned to an affordable, open-sourced solution he dubbed the Cryologger. 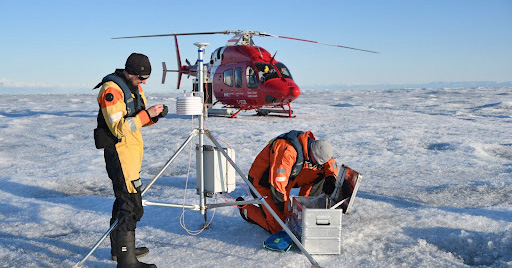 Collecting data from a frozen, remote part of the world

It’s safe to say the Arctic is a pretty inhospitable place. Temperatures can fall as low as -40°C and during the winter months it can be dark for 24 hours a day. Although infrequently visited, the Arctic, and the cryosphere (all the frozen parts of the planet), remain important places for science to study.

In an environment undergoing rapid environmental change, there is an alarmingly small amount of data being collected – in part because of reliance on expensive and proprietary commercial data acquisition and telemetry systems. Scientist Adam Garbo knew there had to be a better way. Focusing his research on “low-cost, open-source technology to help study the cryosphere,” Garbo set out to create an affordable and open-source solution to this deficiency of data. This is the idea behind the Cryologger. Configured for a number of different research applications, such as an iceberg tracking beacon, an automatic weather station, and most recently, a glacier velocity measurement system, the Cryologger is a flexible and powerful tool.

Garbo describes the Cryologger as, “an Arduino-based data logging and telemetry platform constructed using off-the-shelf components. One of the main goals of the design is that it remains inexpensive, modular, and user-friendly.” 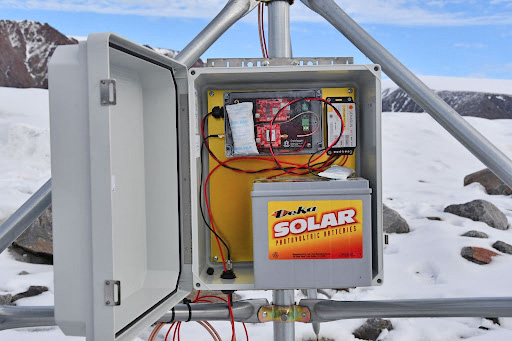 Interior of an assembled glacier velocity measurement system enclosure. Featured in the smaller enclosure is the MicroMod Data Logging Carrier Board and u-blox ZED-F9P GNSS receiver.

“The Artemis Processor is very power-efficient, which makes it well-suited for processing the incoming data from the GNSS receiver over long durations. The GNSS antenna has also proven to perform just as well or even better than more expensive commercial antennas.”

Although different applications of the Cryologger require adjusting certain components, the glacier velocity trackers are built almost entirely with off-the-shelf SparkFun products. For this build, the systems rely on the GPS-RTK-SMA Breakout - ZED-F9P GNSS receiver and GNSS Multi-Band L1/L2 Surveying Antenna to collect high-accuracy position data. All of the processing and logging of data is handled using the MicroMod Data Logging Carrier Board and Artemis Processor. When asked why he chose these components, Garbo responded, “I'm a big fan of how modular the components of the MicroMod ecosystem are. One of the main reasons I chose to use the Data Logging Carrier Board was because it allows users to control the power to the microSD card and other connected sensors. This really helps to reduce the power consumption when the system is asleep.” As you might expect, this can be a huge issue in the Arctic, where stations are serviced about once a year, not to mention the lack of sunlight for the solar panel. Garbo boasts, “the Artemis Processor is very power-efficient, which makes it well-suited for processing the incoming data from the GNSS receiver over long durations. The GNSS antenna has also proven to perform just as well or even better than more expensive commercial antennas.” 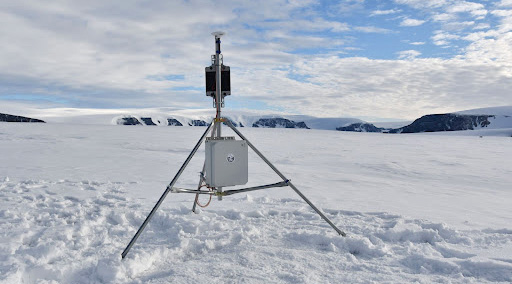 Fully assembled glacier velocity tracker deployed on the Belcher Glacier on Devon Island, Nunavut, Canada. Featured on the top of the center tripod mast is the SparkFun TOP106 GNSS antenna.

The Cryologger project is already providing researchers important information about glaciers in the Canadian Arctic, which will be used by the University of Waterloo and University of Ottawa to validate maps of glacier motion made from satellite imagery. Garbo says, “these maps allow us to look at how the flow of the glacier has changed over time, and help us to better understand how glacier motion is evolving in a warming climate.”

Data recorded in the summer of 2021 showed, over the course of a few days in the month of August, that the speed of a glacier more than doubled from 0.75 m (2.5 ft) to over 2.5 m (8 ft) per day! Adam and his team are still investigating the cause of this surge, but they believe it was caused by a big rainfall event in the area.

Garbo feels the Cryologger is exemplary of how inexpensive open-source hardware and software can provide a robust method for improving collecting in-situ data in the cryosphere. New development ideas are already underway, with one concept turning the beacon into an ocean drifter buoy once the ice melts. Follow Garbo and his Cryologger on their open-source journey by visiting his website where you can follow the drift tracking beacons in real time. In addition, you can find more detailed information on all of his projects on GitHub.