Creating your very own animated prop for Halloween utilizing the STK!

I'd be lying if I said I was ALWAYS really into Halloween. You might ask, "But aren't you into the paranormal and all that jazz?" Yes, especially the jazz part! Seriously though, you'd think that being passionate about the paranormal and the horror genre would somehow make the perfect marriage. Ah well, sometimes it takes real marriage and a baby to change all that. Even more so when Halloween is your S.O.'s favorite holiday. So naturally, being the good little human I am, I embraced it. Inevitably, and without much say in the matter, so did the baby. If I can just momentarily direct your attention to Exhibit A: the 2014 Baby Announcement photo. This really symbolizes the turning point for me. 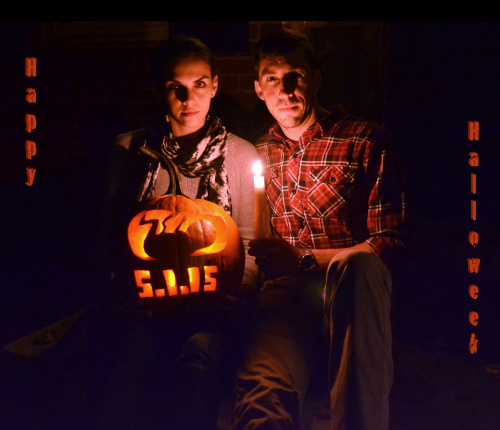 You know, a lot of people actually thought we were throwing a Halloween Party from this picture. Instead of contacting us with congratulations they called us up asking what the date/time meant on the pumpkin, and if they needed to R.S.V.P. or bring anything. To which I had to fully explain the picture... "Well, no actually that's a due date, and the image on the pumpkin is a fetus. Er... do you see the head and feet? Notice the little umbilical cord? Sorry about that. Yeah no, unfortunately no party... just a good ol' pregnancy announcement." Awkward silence. Sent with lasers.

Somewhere along the line, feedback from family and friends stating how incredibly creepy the baby announcement was turned into, "Hey, why not creep out the whole neighborhood?" Unbeknownst to me at the time, that picture would be the start of an epic production we put on every year for the neighborhood - our very own Haunted House! Please do come in...

Our first haunted house was a bit rough with just the two of us, although from the clip above I think we were pretty scary. You're right... a lot of that can also be credited to the strobe working its magic, the low-lying smoke machine, and having our little guests walk around in the dark. Gotta love those parents though; indulging in their own curiosity as they drag their kids through the house shouting back, "C'mon, it's not THAT bad!" I personally have never seen so many sets of eyes that wide open in my life. It's probably the only time of year you measure success around how many screamers and criers you get. However, we did make up for our lack of actors by incorporating various Halloween props and animatronics.

We've grown a lot since then, but in the process I have become a huge fan of animated props and sporadically placing them between themed rooms. While scouring the internet and rando Halloween shops this year, I came across a moving Ouija board piece that I secretly HAD TO HAVE! Only downside was that I didn't really like some of the features included, so I decided to make my own utilizing the SparkFun Tinker Kit. Definitely check it out, it's such a neat little kit! 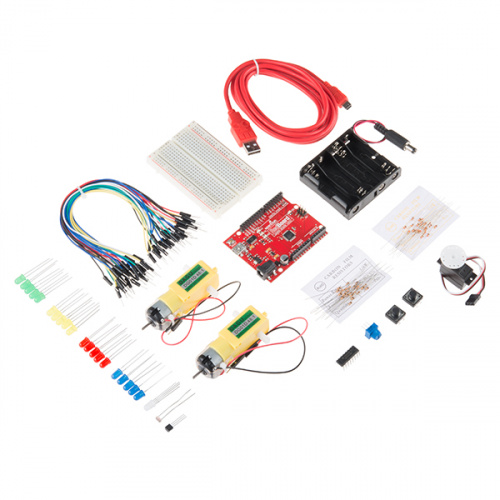 The Haunted Spirit Board utilizes half of the 16 items available to you in the STK including a Mini Photocell, one Hobby Gearmotor, an H-Bridge Motor Driver, SparkFun RedBoard, SparkFun USB Mini-B 6-foot cable, both 330 and 10k resistors, jumper wires, a 4XAA to Barrel Jack Battery Holder, jumper wires and a self-adhesive breadboard. I designed it so when you walk by the Spirit Board, the Photocell placed on the front will trigger the planchette to start moving by itself. Utilizing a couple magnets and large plastic wheel mounted to a Hobby Gearmotor, I was able to achieve more realistic movements from the planchette as if it were possessed. My version of the planchette is actually a piece of flint I had laying around from a visit I had to Williamsburg, VA, years ago. 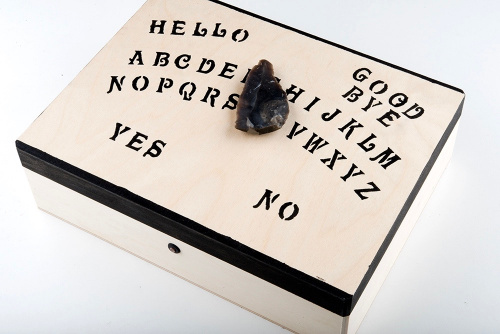 You can yell at me later about opening portals, but this reminds me – did any of you see the movie Ouija: Origin of Evil that came out recently? Any good?

After watching the trailer, I think I'm even more excited to add the Spirit Board to the haunted house this year. Check out the video below to see how I constructed it. Until next time, HAPPY HALLOWEEN!