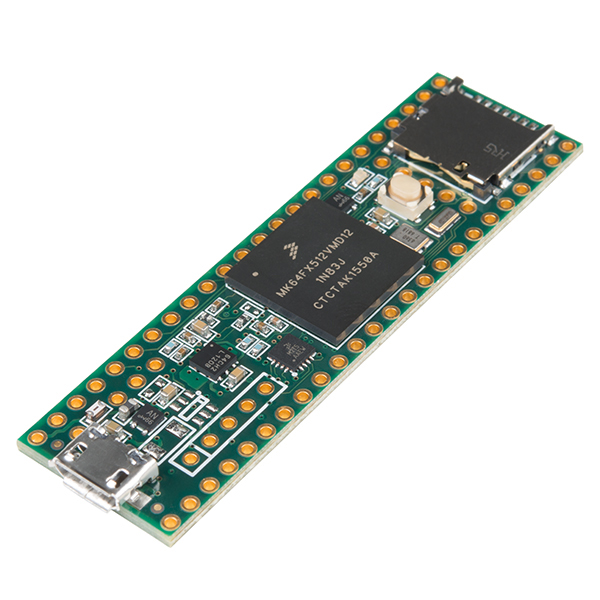 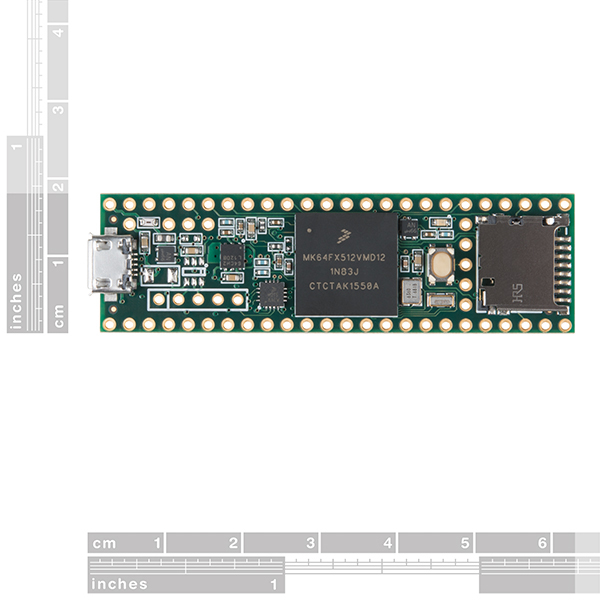 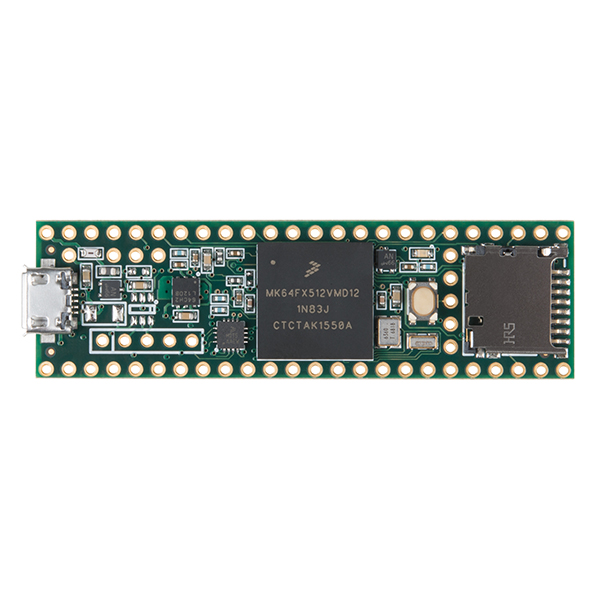 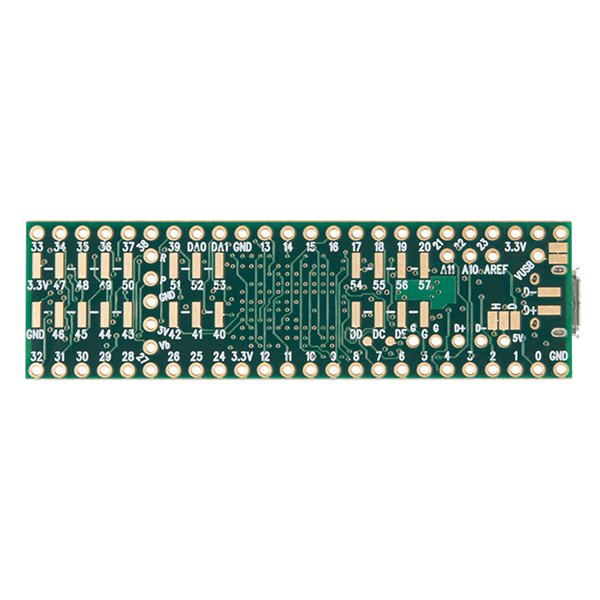 The Teensy is a breadboard-friendly development board with loads of features in a, well, teensy package. Each Teensy 3.5 comes pre-flashed with a bootloader so you can program it using the on-board USB connection: no external programmer needed! You can program for the Teensy in your favorite program editor using C *or *you can install the Teensyduino add-on for the Arduino IDE and write Arduino sketches for it!

The processor on the Teensy also has access to the USB and can emulate any kind of USB device you need it to be, making it great for USB-MIDI and other HID projects. The 32-bit, 120MHz processor brings a few other features to the table as well, such as multiple channels of Direct Memory Access, several high-resolution ADCs and even an I2S digital audio interface! There are also four separate interval timers, plus a delay timer! Oh yeah, and all digital pins have interrupt capability and are 5V tolerant.

All of this functionality is jammed into a 62.3mm x 18.0mm board with all solder points on a 0.1" grid so you can slap it on a breadboard and get to work! The Teensy 3.5 (as well as its sibling, the Teensy 3.6) is larger, faster and capable of more projects, especially with its onboard micro SD card port. An upgraded ARM Cortex MCU (120MHz from 72MHz), more memory (512K from 256K), as well as more RAM, EEPROM and accessible pins make up the key new features of this "teensy" board. The Teensy 3.5 is slightly scaled down from the Teensy 3.6 but is offered at a cheaper price point, comparatively.

Note: This does not come with a USB cable; please check below for an appropriate one.

Teensy 3.5 is another great PJRC product!

about 4 years ago by Defragster verified purchaser

So much power and so many features in a small Teensy package!

Initial processor docs were not clear - but all units have verified been with PJRC (and TeensyDuino software updated) - to have shipped with 256 KB usable RAM not the listed 192K, so the features tab could be updated to agree with https://pjrc.com/teensy/techspecs.html

about 4 years ago by Member #119166 verified purchaser

Paul and Robin hit it out of the park. I've used the 3.1 and 3.2 in the past, but this one is better. It is pin-compatible in the same footprint as the 3.1 (the extra pins extend off the end of the 3.1 footprint), and best of all, it is still 5V tolerant on the digital pins. The Teensyduino libraries for the Arduino IDE are great and so far I've never run into a problem with them.

So far so good.

about 4 years ago by Member #808 verified purchaser

Fired it up, but haven't had time to do more than verify that it boots and communicates after soldering the pins up.

about 4 years ago by Member #906830 verified purchaser

I got the Teensy 3.5 to act as a peripheral to my Raspberry Pi Zero W. It's beefy enough to handle a bunch of JSON messages (I upgraded from an Arduino Mega). I haven't finished the project yet (a distibuted system of microcontrollers running an escape room, in which the Teensy acts as a 'router' between the Pi & a bunch of 8-bit controllers), but I'm super happy with how it's shaping up. The teensyduino addon can be a bit finicky, but it's still truckloads better than using the mega

The only regret I had so far is I didn't buy the 3.6 for the extra clock. The 5V tolerant pins payout a lot though. This board is amazing. One of the best things I've brought to my lab in the recent years. Can't wait to buy more...

i am excited, it has all, what i want

about a year ago by Member #1716277 verified purchaser

I'm using the T3.5 as the brains for a 2x load cell datalogger for measuring tension forces in parafoil control lines. My favorite parts about using these ARM boards is the truckload of RAM/Flash and PJRC's awesome development work on the Arduino core. I don't have to worry about designing code around a small amount of RAM or Program Flash, or getting basic functions like the RTC to work consistently, which lets me spend more time getting the project done, instead of working around chip limitations. This chip has multiple I2C buses, which makes it easy to use 2 or 3 of Sparkfun's NAU7802 Load Cell ADC breakouts, which have fixed I2C addresses, without an I2C multiplexer. The T3.5 integrates an SD card slot, to log data to, and a decent RTC with a very convenient library that automagically sets the time when code is uploaded! The power circuit is well-designed so that it's relatively safe to just plug in a Li-ion battery to the Vin port (after cutting the Vusb jumper trace). Between the input protection diodes and LDO regulator, a safe 3.3V or less is applied to the processor. I'm using one of Sparkfun's 2000 mAh li-ion batteries, and a Pesky Products STBC08 li-ion charger, and I have it wired so that I can select between the battery and USB for Teensy Vin, but plugging in USB will always charge the battery. The pin drive current is a bit low at under 10mA, but that's enough to light a few LEDs for user feedback. The complete system draw with LEDs, the two NAU7802 ADCs and the Teensy running at 120 MHz was under 90mA, with about 50mA of that going to the Teensy. Dropping to 48 MHz, the Teensy draws about 30mA, which is manageable.