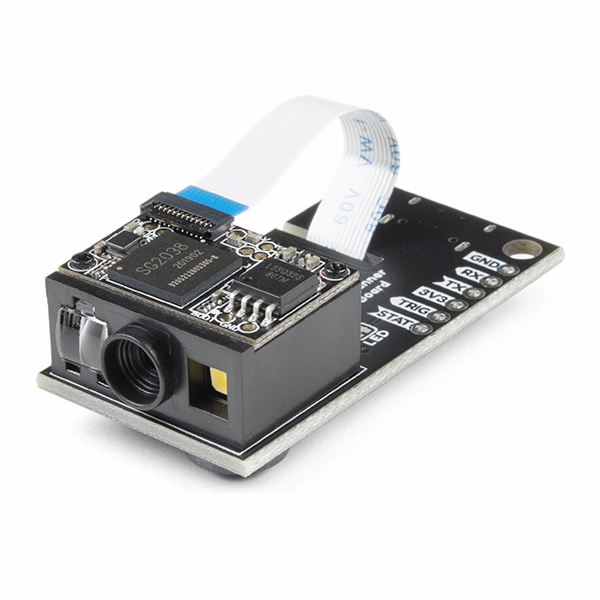 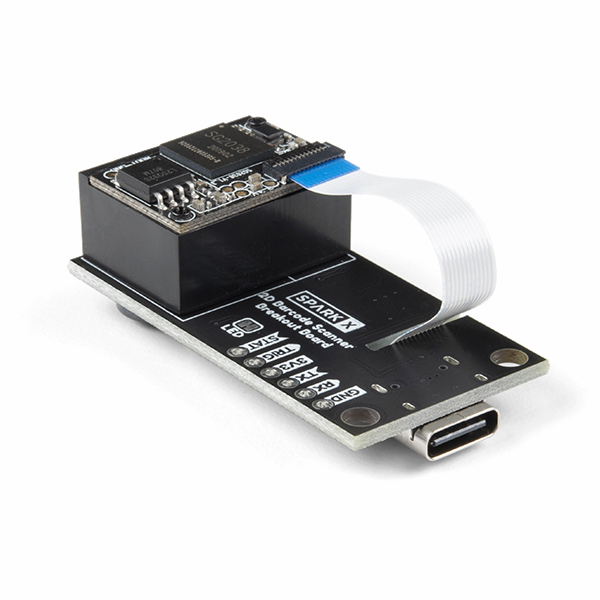 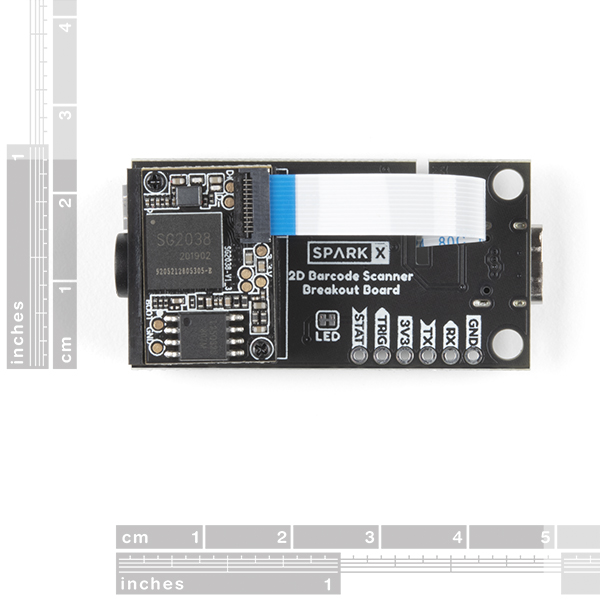 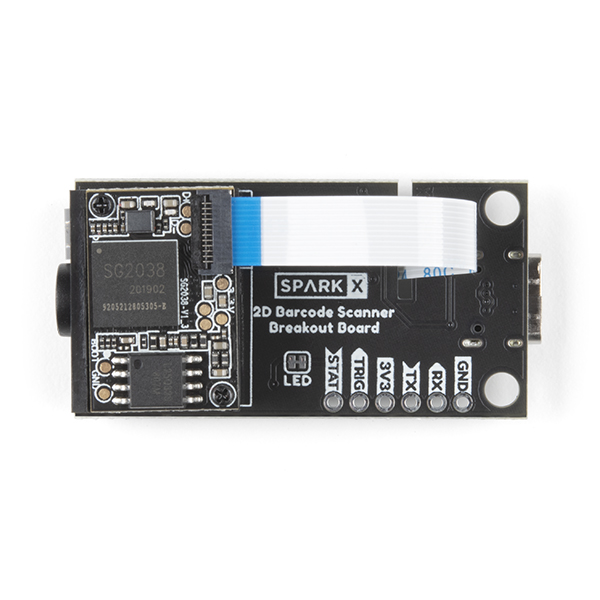 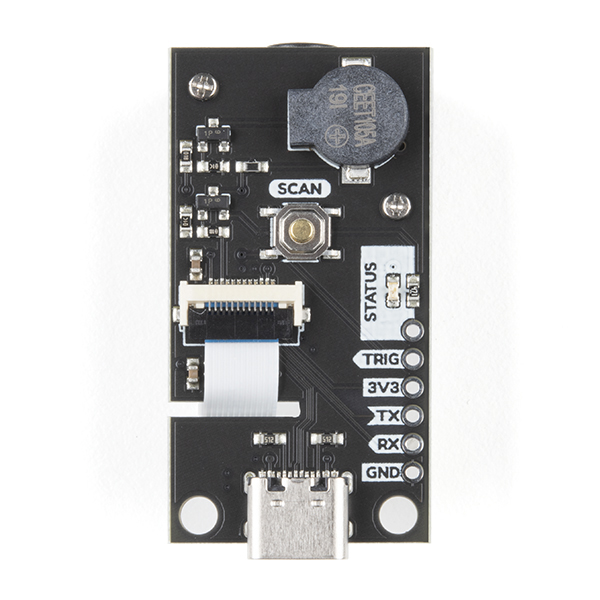 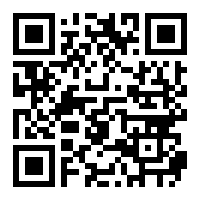 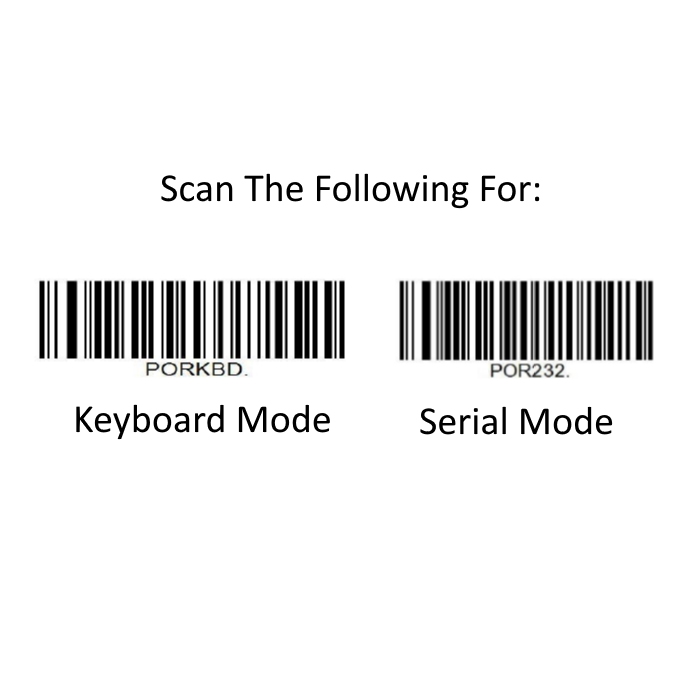 The DYScan DE2120 is one of the coolest little barcode scanners we've ever seen. This tiny "scan engine" will read 20 different barcode symbologies — both 1D and 2D! This is achieved by using a camera coupled with on-board image processing to identify and decode everything from UPC codes to QR codes. The module also features two LEDs: one for illumination and one to project the red line that you're used to seeing from laser-based scanners.

This breakout board makes it easy to explore all of the capabilities of the DE2120 without dealing with finicky flat flex cables. The scanner's USB interface is exposed via the on-board USB-C connector. A buzzer and status LED are connected to the module through appropriate drive circuits and a pushbutton tactile switch is provided on the "trigger" pin. When you're ready to incorporate the module into your embedded project, you can leverage the 5 pin header for direct access to the TTL serial pins, power pins, and trigger input.

The module can be configured either by using the serial interface or by scanning command barcodes found in the datasheet.

This is the beauty of SparkX! We released the first version of the barcode scanner breakout just a few weeks ago. This version improves upon it by reducing the component count and slimming down the board while maintaining all the functionality. All keyboard, HID, and serial can be transmitted over the single USB C connector. The DE2120 has the unique ability to enumerate as all three protocols including a CDC serial driver so the device appears as a standard COM port. For this reason, we removed the CH340 serial converter and second USB C connector from the design. To configure the module please see the configuration manual.

about 7 months ago by cmdailey verified purchaser

Okay first of all: this thing is lightning quick. The only issue I had with it reading a code at all, was when I was trying to read a code off my display and the glare from the (incredibly bright) LED was too much. (Shrunk the code down and used it at an angle and it picked it right up.) It scans the codes so quickly that I really am often surprised at how quickly it picks them up and decodes them. Even the fancy 2D ones. I had some problems getting it to pick up higher density (1000+ byte) DataMatrix, but other than that it's performed awesome so far.

I do want to say the settings barcodes is a super novel approach, and I had fun turning things on and off. I will note that I immediately turned off the startup "beep", because that was way more than just a beep, and was super loud to the point that it made me jump the first time I was plugging it in, because I wasn't expecting it. (That said, sell the little speaker on this thing, SparkFun, it's fantastic for it's size.)

I'm not quite sure how I'm going to fit it into my projects at large right now, so I'm mostly using it as a macro keyboard of sorts, because that's fun.

Last thing of note: the module is mounted slightly off. You can see it in the product photos (the 'target line' LED side is closer to the front of the PCB than the light LED side.) It doesn't affect performance at all, but I spent a little bit of time messing with the screws seeing if I could straighten it out before I realized it was a design thing. A small and very minor annoyance (that matters nil if this thing gets stuck in a case, or detached from the BoB for a project,) that doesn't take away from the experience as a whole.

about 6 months ago by north90 verified purchaser

Using this for a scientific research project. Scanner scans printed code on vials before a sample is collected in the vial, Arduino sends vial barcode and collection time to internet via LoraWAN.

Very easy to work with, only needs a few lines of code. Using in combo with Arduino MKR 1300. The manual has many spelling errors! If you use TTL RS232: the code to start scanning is mySerial.write("^^SCAN."); So no space between ^^ and the command and do end with a "."!

Thanks for another great product! ( there is an underscore symbol between the two ^^, Sparkfun 's website doesn't show it to you)