The Quest for a Right-Angle:

My name is Pete Lewis, and after years of playing in a band and finishing a music degree at CU Boulder, in the summer of 2007 I found myself assembling small electronics at SparkFun. After working in production for about a year, I discovered a neat trick by modifying the basic header footprint in Eagle. This simple but innovative footprint dramatically decreases assembly time and makes it easier for people to solder through hole connectors correct and straight.

I showed up on my first day of work eager to learn. Abe and Matt (production masters) showed me my desk, turned on my soldering iron and gave me a pile of scrap boards to practice soldering. I had very little soldering experience (I once fixed my own guitar cable!), but that doesn't matter at SparkFun - everyone was eager to show me how to improve my soldering skills and share what they had learned. After about half an hour, and a few dozen through-hole components soldered, Abe said, ?Wanna try to make some LCD backpacks?? And with that, I started my building my first SparkFun product!

The idea for a modified footprint started on that first day. Soldering male headers to the LCD backpacks, I was trying to make them look like this: 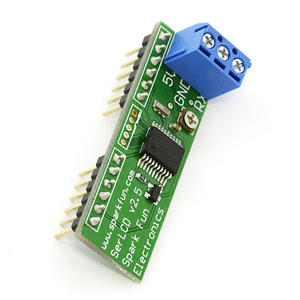 Notice how the male headers are nice and perpendicular to the board. That's not as easy as it looks! My first few didn't come out as pretty as the one above, but hey... it was my first day!

To give you an idea of just how bad it can look, I did a little dumpster diving down in the tech shop: 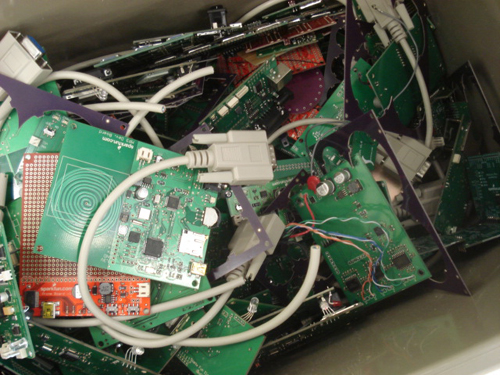 Recognize any of those?

I didn't take too long to find what I was looking for. Here we have an LCD backpack with no 3-pin screw terminal soldered in place yet. This probably more like what my first few looked like: 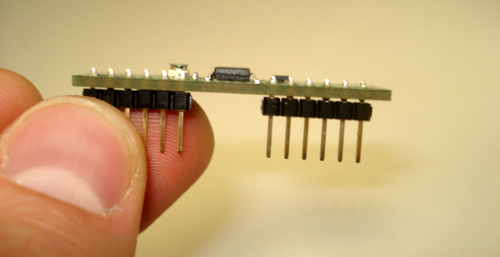 Notice the small gap between the black plastic and the PCB: 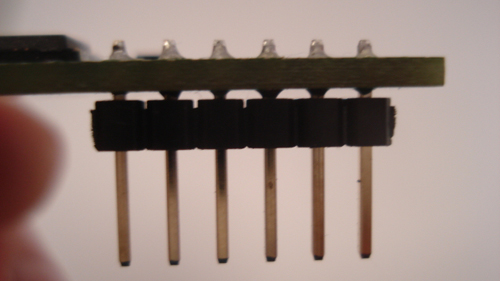 Bad, bad, bad!! Into the dumpster with you!

Here you can see that not only is there a gap, but it's not perpendicular!: 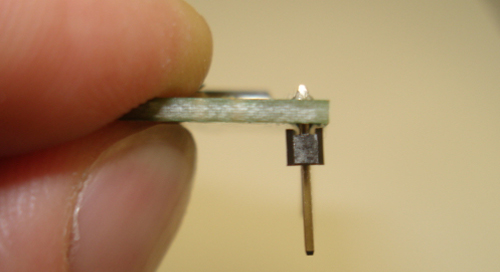 Now back to my story. I was soldering away... enjoying the success of right angles... and then I started to wonder, ?Man... it's kind of hard to hold this header in place. It sure moves around a lot. I wonder if there's a way to make it stay put while I solder it into place??

At first I thought, ?How about making the holes smaller?? This seemed reasonable enough. The holes are slightly larger than the pins, and that's why the header moves around so much. I later learned that you need that space because it allows for the solder to flow down the hole and around the pin - which helps ensure a good connection.

My next idea was to build a jig that could hold both the board and the header in place. Fair enough, it should work. But how much time would it take to build this jig? And how long would it last? Plus, how big is it going to be? Even though it's a little tough to hold each header in place, I can line up 20 or more at a time with the current method. So a jig isn't the best solution either.

And so I just kept on soldering, and I didn't think too much more about it. It wasn't until a few months later (probably a few thousand headers later) that I thought of my most recent adventure, altering footprints!

Matt (director of production) had encouraged me to write down my ideas, so when it hit me, I grabbed my notebook and jotted a few things down. A few weeks ago I was flipping through my notebook and came across these three pages:

At the time I was working on those LCD backpacks again - soldering the 3-pin screw terminals into place. Just like the headers, they require a similar effort to hold in place while you solder.

Next, I turned to the modern Eagle for guidance and played around with footprints. Here is the existing standard footprint for a 6-pin header:

The yellow squares are the pins, and the inside of the green circle is the hole size. Notice how there is an equal size gap between each corner of the pin and the edge of the hole. Here's a closer look: 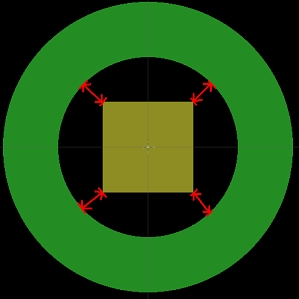 This is where all the ?play? is happening. Also, this is where the solder is flowing down the hole!

And here is how I altered it. I moved each hole a little in the directions of the red arrows:

Notice how two corners of each pin are now touching the edge of the hole. Here's a closer look:

I also alternated the direction (up or down) for each hole. Making the holes staggered like this forms a sort of ?brace? between all of the pins and sides of the holes. It holds them in place nicely. Plus, without changing the hole size, there is still space for the solder to flow down the hole and around the pin.

I knew that the distance I moved the holes was going to be very important. Not enough and then pins would still move around. Too much and they wouldn't even fit. So I tried four different amounts and designed the following board: 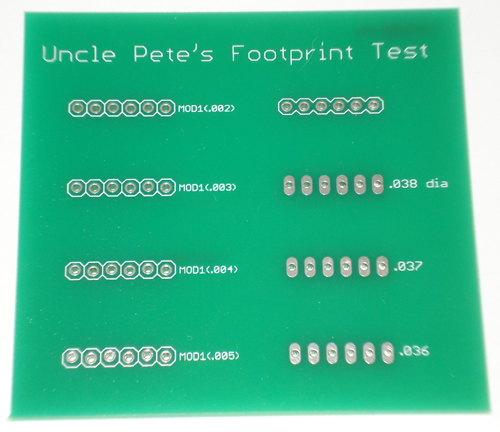 The top right is the current standard footprint, and the rest are my mods. On the left side I tried four different amounts of movement. I shifted the holes by 0.002, 0.003, 0.004 and 0.005 of an inch. On the right side I tried a couple different diameters. Later, I decided that I wouldn't want to trust the fab house to drill the holes with that kind of precision. If the the hole was made just a bit too small, you wouldn't be able to use the board! I also tried out the ?long? shaped pads in Eagle, which I have experienced to be quite helpful in getting a nice fillet. But the winner was... the 0.005 on the bottom left. Just snug enough, but not too tight. Here you can see the alternating spaces quite clearly: 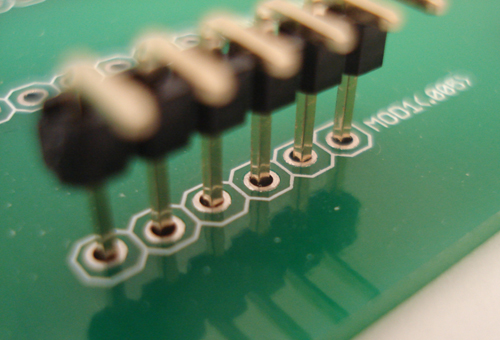 And here's a shot of it pushed into place, almost like a snap-in component! 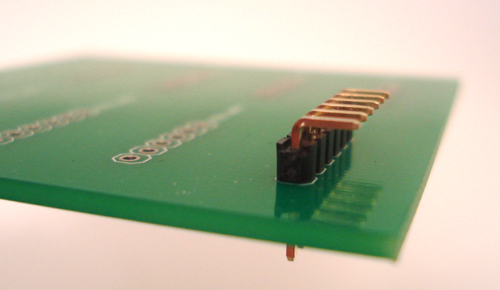 Yes, victory is mine! The sweet taste of success!

You can find these footprints in the updated SparkFun Library. Under the device ?M06? you will find two new variants. The one pictured above is called, ?LOCK?. And I also included a variant called, ?LOCK_LONGPADS? It has the same spacing but looks like this:

And, if you like your headers to align perfectly every time with little effort, then feel free to use this footprint on your next design. Also, don't be afraid if you see some squirly-lookin' pin holes on our future boards. We're just trying to make better right angles!