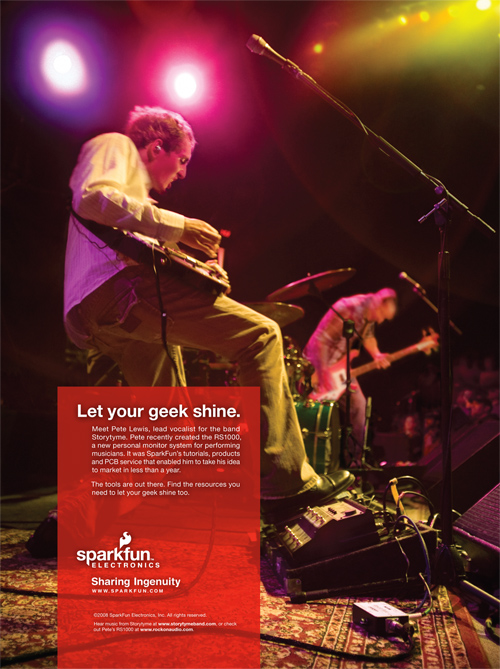 This picture was taken on March 28, 2008 at the Fox Theatre in Boulder, CO.  Opening for Blind Melon, Pete is playing a show with his two brothers, in their band called, Storytyme.

The photographer was SparkFun Director of Marketing AnnDrea, who was assisted by SparkFun Graphic Designer Lara. The photo was shot using a Canon 1DS Mark II.

Pete Lewis' project enables musicians to use in-ear monitors in a new way.  Designed as an affordable alternative to the expensive technologies available now, Pete's system is collectively called the Rockon Monitor System.

What's This About "In-Ear" Monitors?

In-Ear Monitors are a lot like the earbuds you get with most MP3 players now-a-days.  Musicians use them during a performance as a personal monitor system.  Instead of listening to music, like with an MP3 player, they are listening to a live mix of sounds (which includes themselves and all of the other musicians on the stage).

In-ear monitors are very useful because they isolate the sounds that a musician hears.  Without using in-ear monitors, loud stage volumes can make it difficult for a performer to hear themselves and their bandmates.  Most in-ear monitors have a foam ring around the bud, which acts a lot like an ear-plug - this helps to block out the loud stage volumes, while still allowing the performer to hear a mix.  Some musicians will get custom made ear-buds that are molded specifically for their ear canals.  Most musicians find this more comfortable and more isolating - although they do cost more than the disposable foam rings.

So What Does Pete's Product Do?

Pete makes two distinct products that can work together. The first is product is the "Rock Box Limiter."

The Rock Box Limiter is a limiting headphone amp that can power a set of in-ear monitors.  It can be used alone, or with the Rockon Cable (more on that later).  It takes a sound source (say... a mix of live sounds from a mixing console), and then amplifies it to a nice level for listening with a set of in-ear monitors.  The most important thing that it does is limit the output.  This means that no matter what happens, only a safe level of volume will be sent to your ears.  Accidents happen, people crank volumes, and this protects your ears.

The second product is the Rockon Cable. This is a special cable that is specifically designed for guitarists and bassists.  It allows you to use a single cable for both your instrument cable and your hard-wired in-ear monitor mix.  It's basically two cables in one: a guitar cable and a headphone cable.  They are spiraled together and then covered by a nylon sleeve.  At each end of the cable there are two connectors: one for your guitar signal, and one for your in-ear mix.

What SparkFun Products/Services Did Pete Use?

Pete used various components that we sell at Sparkfun including trim pots, switches, capacitors and resistors.  Pete also used BatchPCB for cheap prototyping of his initial design. Pete also utilized SparkFun tutorials in the design of his project, specifically Beginning Embedded Electronics 7, 8 and 9.