I've been reflowing SMD parts on PCBs for around a year now. Spark Fun has barely had the capitol to invest in a hot-air rework station, let alone pick and place machines and industrial reflow ovens. Luckily, as business has increased, revenue has allowed us to purchase a few bottom-dollar machines to help with manufacturing. I'm here to tell you, it was all a waste of money...

Don't get me wrong, there is the correct way to manufacture 10,000 units of a caller-ID controller board, and then there is the Spark Fun way. If you're reading this, you're like us - strapped for cash and in need of a good way to reflow PCBs.

Here is a tutorial that will break down the different approaches to SMD reflow soldering, what we've learned, and what to steer clear of.

As always, this stuff can kill you, burn your house down, or make your basement smell pretty foul. Don't try any of this at home - wait, you are at home. Well, just take everything we say with a grain of salt.

There are five ways to solder SMD parts that I can think of: 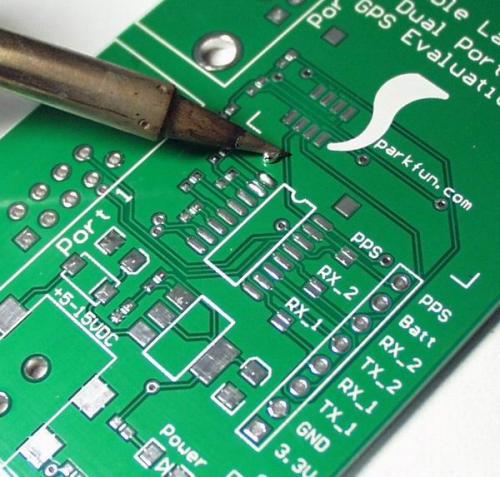 Hand soldering is cheap (no extra equipment needed). You will need a decent iron, but nothing else. $100 is pretty standard for an iron although $50-$2000 is possible.

New users to soldering SMD devices are always intimidated by soldering itty-bitty leads. Believe you me, it can all be hand soldered.

Maybe. I've never used one but Pete does. With a little practice, we can see disconnects and color variations that indicate problems with the naked eye. 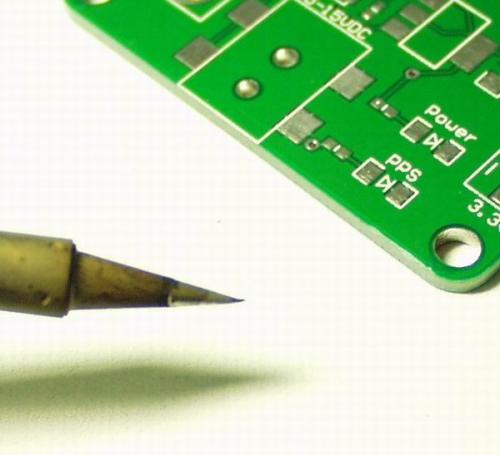 Probably not. Don't even think about trying it with your $10 Radio Shack fire starter! But a conical tip of small size works fine. A heftier tip can be beneficial in some cases (helps to move solder blobs). 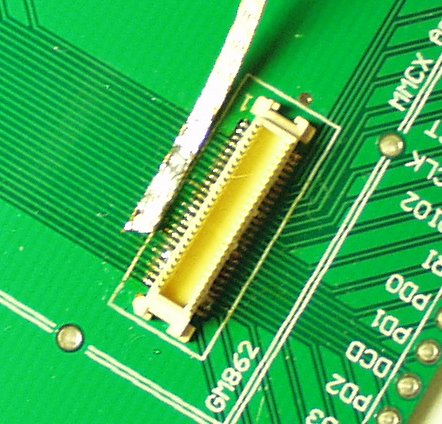 No really, you can! No matter how small the pitch, even leadless QFN packages, can all be soldered with some solder wick and some solder ball chasing. It's not easy and not fast, but it can be done. The only exception is BGA which I've never tried with an iron. But get creative! All you have to do is heat up the overall area. Soldering from the back side of the PCB using vias as heat ducts has worked for other people.

Over all, hand soldering is the way to do it when other means are not available.

Using a toaster oven has been shown to work in many cases. A $50-$100 toaster oven from your local Wally World can do quite nicely. The Seattle Robotics Society's report on Toaster Oven Reflowing covers the process nicely. I've even built up a controller board to try to mimic the real reflow oven profiles. 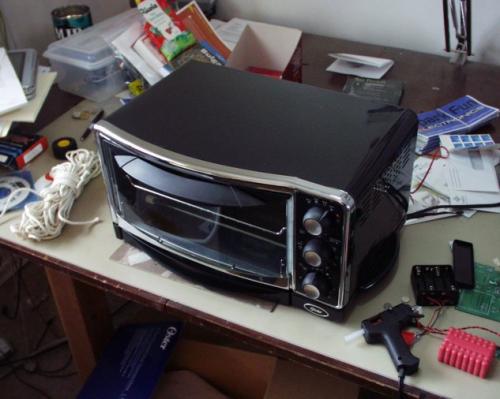 Ben and I have found that many plastic connectors have low melting points while other connectors (SMD USB connectors with metal housings) have very high reflow points. This was a major problem on the GM862 EVK v2 boards. Time and time again, either the USB connector would fail to reflow because of the metal housing reflecting the heat, or we would bake the board so long that the USB would reflow but the plastic Camera connector would be completely hosed. In other words, you have to destroy the plastic connectors or have larger connectors pop off in your hand. The main culprit in our case was the over-head heating elements in our industrial reflow oven. Since our toaster oven has elements on both top and bottom (the top elements heats up much faster), a toaster oven would have the same Achilles heal, melting the softer components on the top side of the PCB. 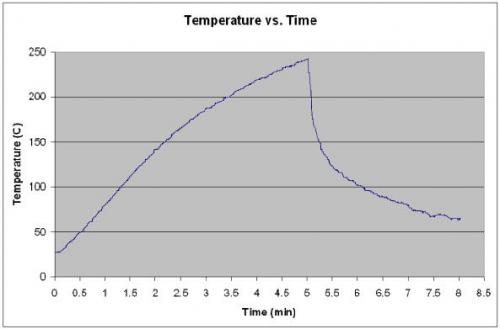 Here we have the initial test of the Spark Fun Oster Toaster. Starting from 25C, the ramp is 225C in 5min or 45C/min = 0.75C/s. This is actually pretty good. The commercial reflow ovens are 1-1.5C/s. The massive drop at 5min is when the front door was opened. The toaster can actually hit 250C without any problems.

In the end, toaster ovens work, but they are too dependant on external control or attempting to view inside the little window waiting for something to happen. Over-head elements run the risk of melting plastic connectors to the point of destruction.

Don't get me started. We dropped $2300 on a reflow oven from Madell Tech because we didn't know any better. It was a good lesson learned. The oven is fairly large so shipping was pretty steep. The unit runs on 220V and came with some incompatible Chinese plug on the end. 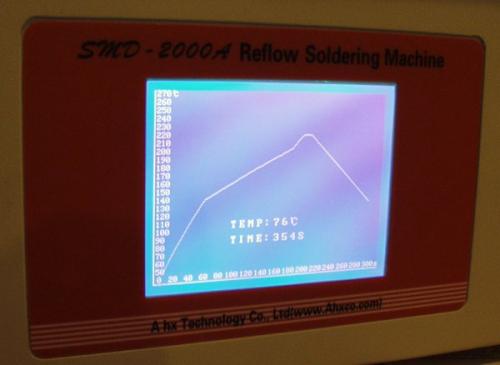 The profile can be set to any temperature over any length of time through this fancy LCD and a couple tactile buttons. 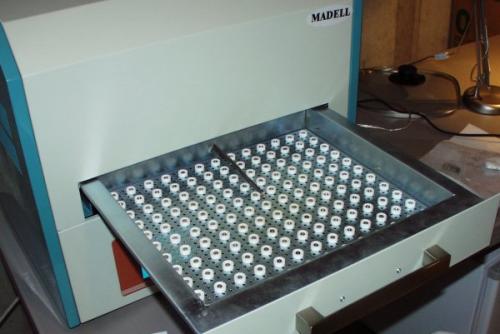 As you can see, the tray is pretty large. The oven has fans built in for cooling. The elements are IR which heat very quickly allowing the temperature to be monitored very closely. The slim brown thing is the temperature sensor that is supposed to be taped to every PCB that is reflowed - something we've never done.

As stated above, this thing is a problem because there are cold spots where the USB connectors never reflow. If we tweak the profile up high enough to reflow the USB connectors, the plastic connectors melt. We've had repeatability problems, etc, etc. We continue to use the oven for large batches. It could easily be an operator error - we may be missing something simple. Either way, we are happier with our $30 hot plate.

This is a favorite around the office. Using these cheap rework stations saves time and money. 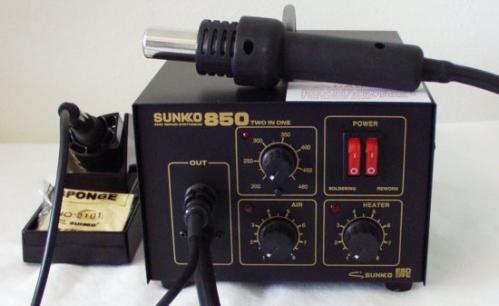 Actually, we stuck the basic small circular nozzle on there and have never taken it off. The hot air just sort of flows everywhere heating of the immediate area of the PCB.

I noticed the other day, the digital stations will tell you precisely what temperature is leaving the nozzle, but what is the temperature of the PCB? Who cares? Most applications dictate that the temperature be lower than some threshold, but the overall temp does not matter. All that matters is that it is hot enough to melt all solder joints at the same time. Given enough time, you can truly warp a PCB, boil off the solder mask, etc. It's a tool that takes practice and learning. Nothing too major - we love em!

Finally we get to the point of this tutorial... After playing with all of the above, we were still being forced to hot-air fix some boards, solder on others, and had even more problems with others.

The reflow oven was melting some boards and not reflowing others. Hot-air was taking far too long, hand soldering was out of the question. The toaster oven was cheap, but would have similar problems to the IR oven. Finally, Ben and I wondered why we couldn't use a hot plate to heat just the PCB - this would protect the plastic parts and should reflow the USB connectors better (heat transfer is better because the IR heat was bouncing off the metal housings whereas the hot plate heats the PCB directly). $32.44 and another short trip to Target and we've got ourselves a hot plate! 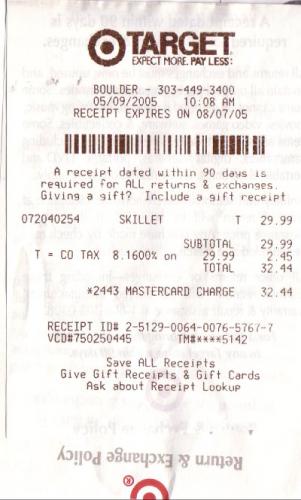 Holy smokes - I could take this thing back in 3 months!

Okay, so it's actually a hot skillet. There was a hot-plate for $19.99 but I decided it was a bit small and opted for the larger skillet with lid (might help, right?).

So I have Ben whip up a Lassen iQ breakout board with the evil USB connector and tricky USB CP2102 IC. We grab a temp gun to watch the temperature of the skillet. The dial controller reads up to 450F(230C). This should be more than enough...

So we plug 'er in and let 'er go. It was probably 2-3 minutes of staring before the temperature hit ~200C and we noticed the smaller components reflow. As expected, the USB connector took an additional 20-30 seconds of ramping up heat. Finally, after the USB solder connections looked good, shiny, and liquid, we turned the dial to off and waited for the board to cool. A quick test and the board passed on the first try! The USB connector was soldered solidly to the board and all plastic parts survived. The only noticeable problem was the silkscreen on the plate side (PCB bottom) was slightly lightened as if some of the ink had been removed - though it was still white...

How about some pictures? This is the CP2102 breakout board, in a panel of 4x3. 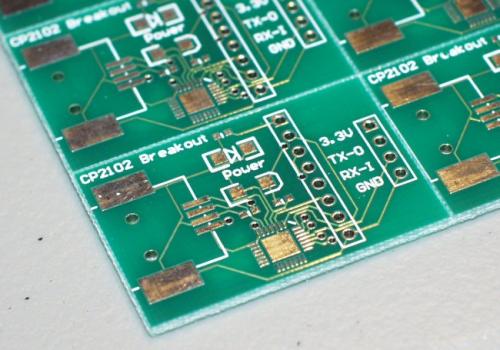 V-scored PCB before paste application. We use Kester Easy 256 solder paste. For more information about how to stencil solder paste - have a look at our solder paste tutorial! 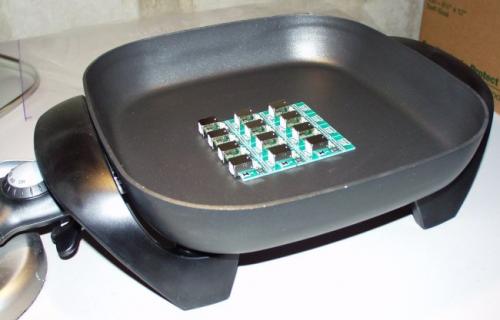 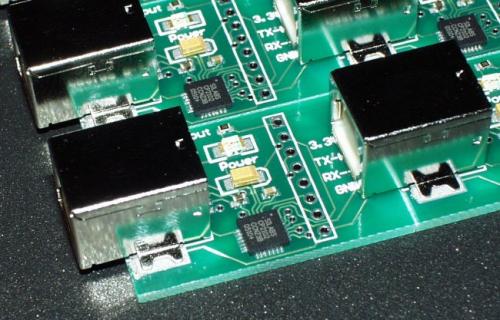 Baking - at about 100C. Notice how all the paste looks grey and dusty. 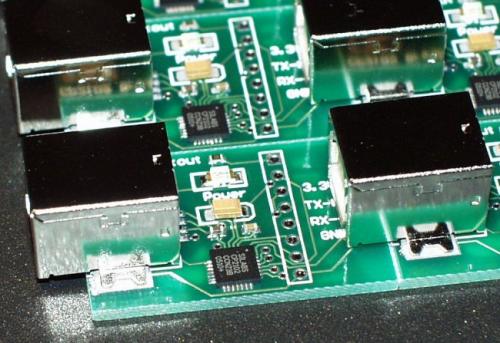 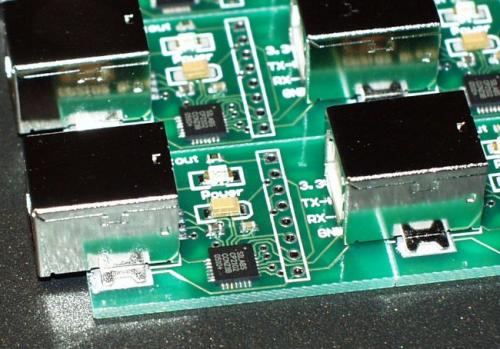 All small components are flowed - ~210C 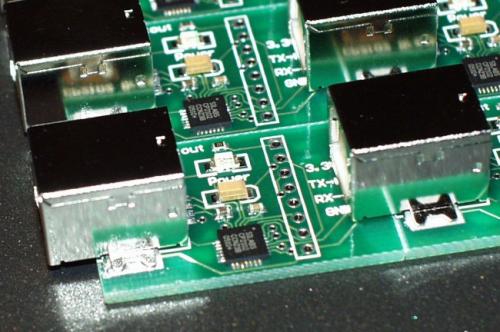 The pictures don't show it, but it is actually very easy to tell when the solder paste has turned liquid.

This panel was much trickier to reflow as the skillet has a circular heating element. The center is the coolest part. By sliding the PCB around (wonderful Teflon) I was able to position the various problems spots to a hot spot in the skillet. The smaller, circular, $20 unit from target may have a better element.

I don't think anything can replace the large scale, multi-zone, IR/convection reflow ovens. But I could by 100 hot plates at $30 a piece before coming close to the price and performance of a traditional reflow oven.

Email us! spark at sparkfun.com