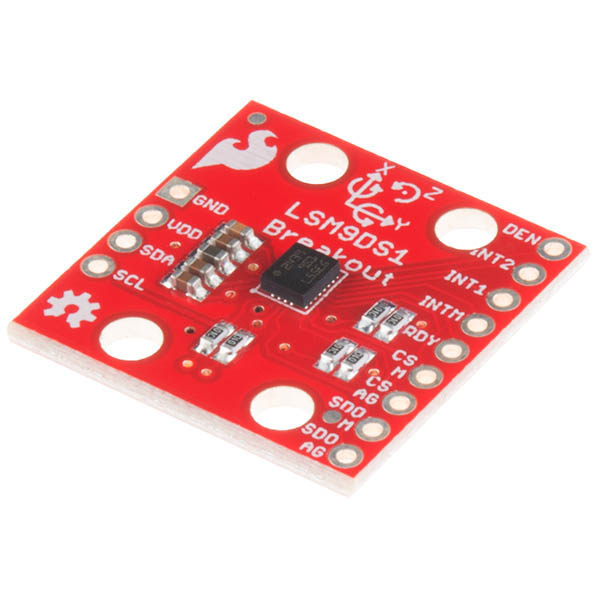 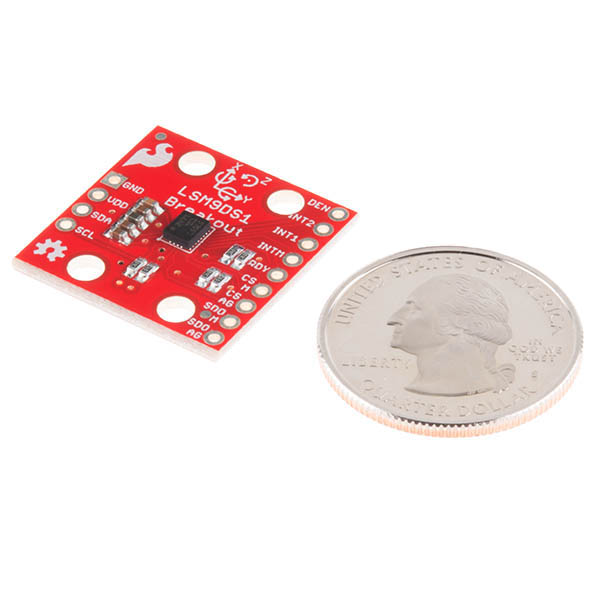 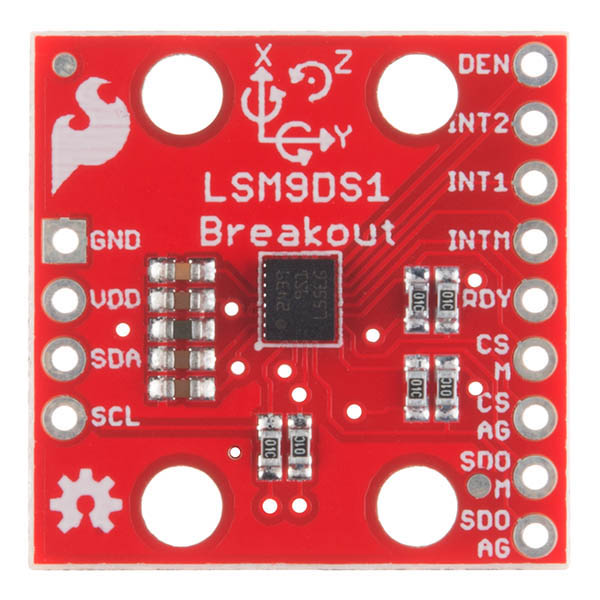 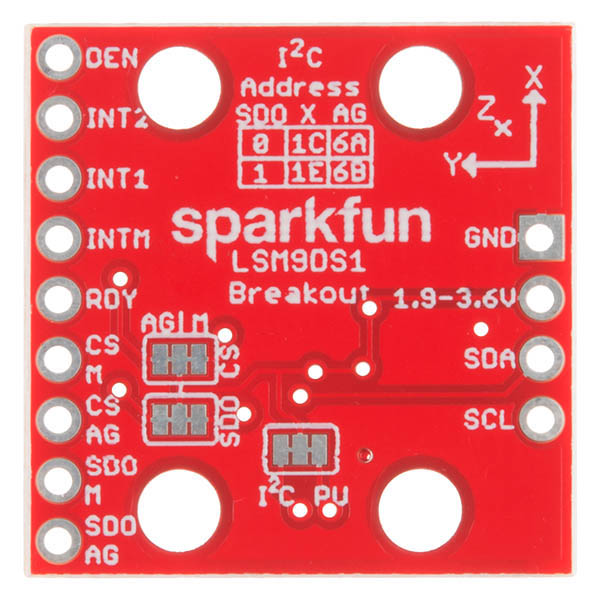 The SparkFun LSM9DS1 Breakout is a versatile, motion-sensing system-in-a-chip. It houses a 3-axis accelerometer, 3-axis gyroscope, and 3-axis magnetometer – nine degrees of freedom (9DOF) on a single board! The LSM9DS1 from STMicroelectronics is equipped with a digital interface, but even that is flexible: it supports both I2C and SPI, so you’ll be hard-pressed to find a microcontroller it doesn’t work with. This IMU-in-a-chip is so cool we put it on the quarter-sized breakout board you are currently viewing!

The LSM9DS1 is one of only a handful of IC’s that can measure three key properties of movement – angular velocity, acceleration, and heading – in a single IC. By measuring these three properties, you can gain a great deal of knowledge about an object’s movement and orientation. The LSM9DS1 measures each of these movement properties in three dimensions. That means it produces nine pieces of data: acceleration in x/y/z, angular rotation in x/y/z, and magnetic force in x/y/z. The LSM9DS1 Breakout has labels indicating the accelerometer and gyroscope axis orientations, which share a right-hand rule relationship with each other.

Get Started with the LSM9DS1 Breakout Guide

A hookup guide for the LSM9DS1, which features a 3-axis accelerometer, 3-axis gyroscope, and 3-axis magnetometer. It's an IMU-in-a-chip!
Favorited Favorite 9

about 5 years ago by CrustyCarbuncle verified purchaser

This is an impressive sensor, but using the Arduino code got me off on the wrong track. It is probably fine code, but I don't do much with Arduinos and I needed something running natively under Linux. I thought: Arduino, its just C++ really, just some minor porting...

Somehow I got started at the wrong end of the stick and wasted a week on this. Calibrating, reading, and making this useful without an unnecessary Arduino CPU in the picture turned frustrating. And there does not seem to be a lot of other code out there that suits my needs.

Finally, after much thrashing about, I found my way to:

This code, in spite of being in in a seemingly RasPi-exclusive source, builds great under Ubuntu desktop, other small arm platforms, includes both C++ and Python wrappers, and has both local and remote (serial) client tools for calibration.

The code is clear enough, and there is a useful Calibration.pdf document included that is informative. As always, however, it could use a bit of other documentation. Other versions of this library are out there, but seem to have been abandoned for now.

Native code for standard platforms makes sensors like this much more useful.

about 6 years ago by Member #503831 verified purchaser

Having used other 9 DOF IMUs, it is the available libraries that make this type of product useful, the library available for LSM9DS1 is good and examples are useful. The simple I2C setup worked with no issues for me.

about 6 years ago by Member #62377 verified purchaser

When i first hooked this thinger up I accidentally used the DS0 vs DS1 libraries and was pretty excited because of the AHRS stuff that came in the DS0 libraries. Unfortunately those don't work with the DS1 so i had to spend an hour or so porting over the AHRS example from the DS0 libraries. Since this is a 9DOF chip it seems to be there should be an AHRS example as that is really the primary reason behind getting a chip like this, and dealing with the math intensive AHRS algorithm can be a little daunting.

about 5 years ago by Member #831048 verified purchaser

Hard to set up two or more.

about 4 years ago by jrstanley verified purchaser

The sensor works really well, but as I tried to set up together more than one, wasn't able to hook up by I2C, as the addresses can't be changed.

about 4 years ago by Member #456534 verified purchaser

Arduino library makes it really easy to use.

about 4 years ago by Member #617060 verified purchaser

While the price is perfect, the sensor did not perform as expected. Just sitting on a table indoors, the gyro and magnetometer were bouncing wildly (~20 dps and ~3 gauss). The accelerometer was fairly stable but the point of the IMU over the accelerometer is to collect data from the other components. We bought two boards and both had this issue so we decided against using them. Wasted our money and time. If you have no need for accurate measurements, this might be fine.

about 6 years ago by Member #621331 verified purchaser

This is a lot of action on a tiny board and, paired with my Arduino UNO, the project possibilities are nearly endless! I haven't tried the SPI hookup yet but the I2C is dead simple and works great. Documentation was easy to access, very complete and easy to understand. Cool is the best word!

the library and example code is pretty easy to understand and use. The i2c interface is sweet and simple. I need to figure out a few things like max update rate and such. I might update as I go.