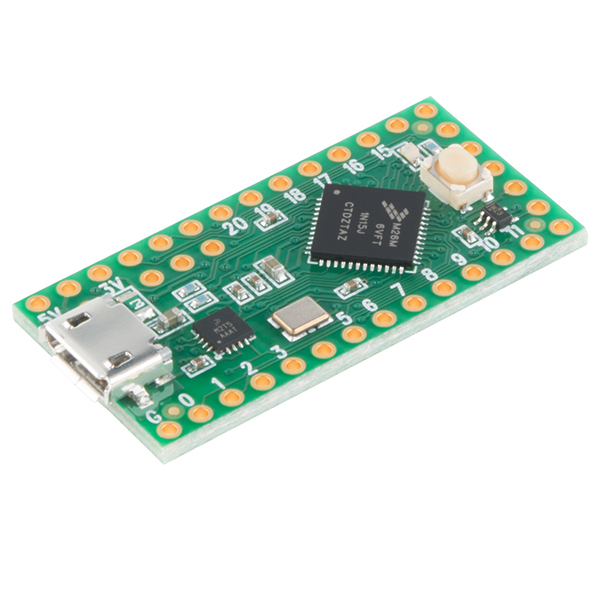 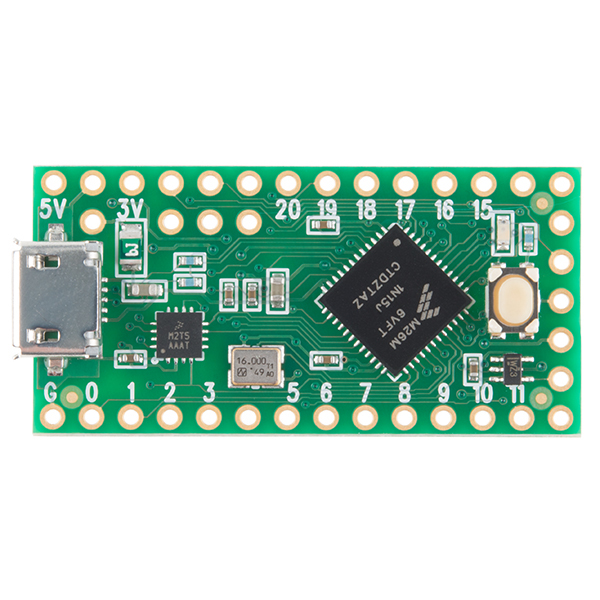 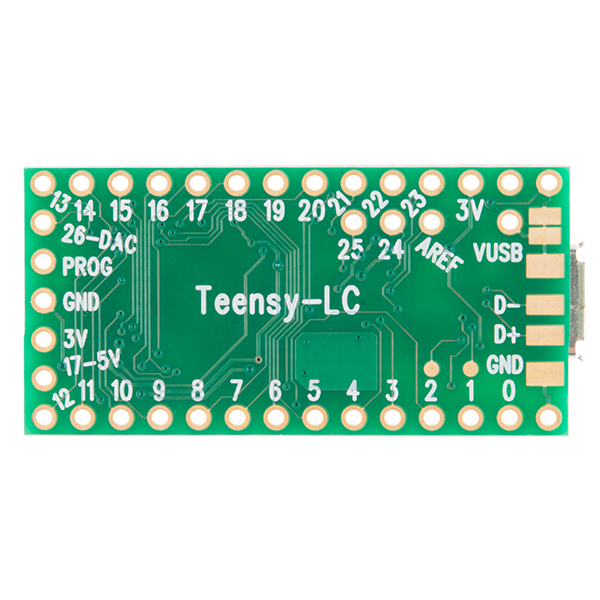 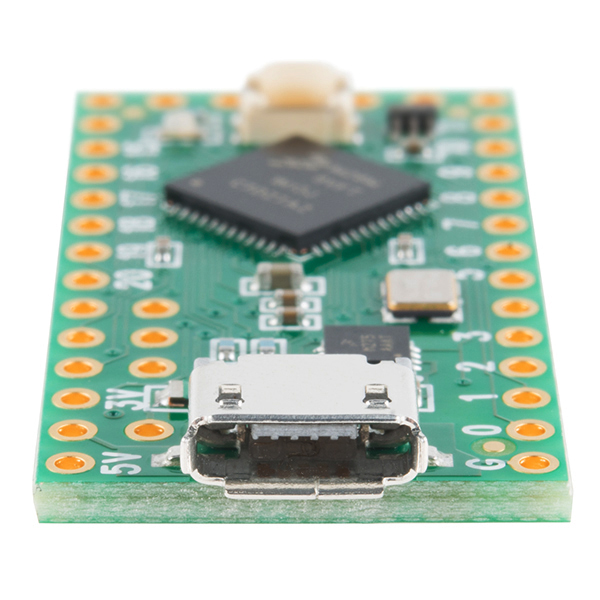 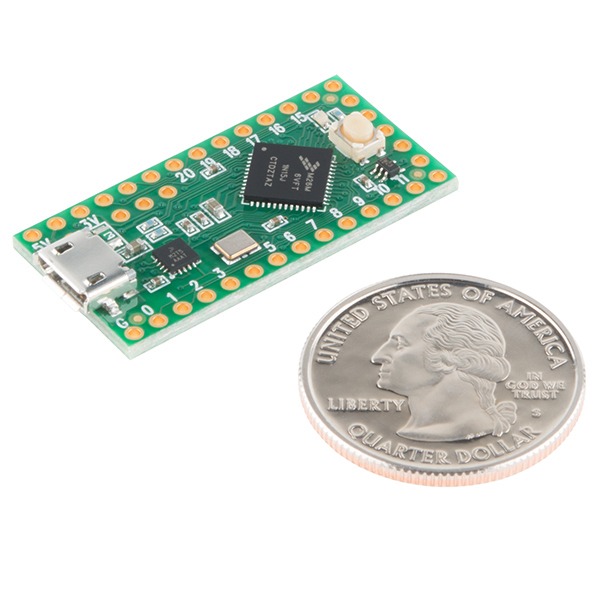 The Teensy is a breadboard-friendly development board with loads of features in a, well, teensy package. The Teensy LC (Low Cost) is a 32 bit microcontroller board that provides you with an uncomplicated option for getting started with the Teensy line of products without breaking the bank!

The Teensy LC comes pre-flashed with a bootloader so you can program it using the on-board USB connection: No external programmer needed! You can program for the Teensy in your favorite program editor using C or you can install the Teensyduino add-on for the Arduino IDE and write Arduino sketches for Teensy!

The processor on the Teensy also has access to the USB and can emulate any kind of USB device you need it to be, making it great for USB-MIDI and other HID projects. The 32 bit processor brings a few other features to the table as well, such as multiple channels of Direct Memory Access and an I2S digital audio interface! There are also 2 separate interval timers! Also, the Teensy LC can provide system voltage of 3.3V or 5V to other devices at up to 5-20mA.

All of this functionality is jammed into a 1.4 x 0.7 inch board with all headers on a 0.1" grid so you can slap it on a breadboard and get to work! So, what sets the Teensy LC apart from the Teensy 3.1? First off, this version has been streamlined to be as cost effective as possible. Obviously, the LC doesn't share a lot of power that the 3.1 possesses but by no means does it make the LC a 'weak' board! The Teensy LC is equipped with 8kB RAM, 62kB of flash memory, and 27 Digital I/O pins with 13 high res Analog inputs.

Note: The Teensy LC does not come with a micro-B USB cable, please check the Recommended Products section below for an appropriate one.

Examining the diverse world of Arduino boards and understanding the differences between them before choosing one for a project.
Favorited Favorite 18

Build a Boss Alarm that alerts you of anyone walking into your office and automatically changes your computer screen.
Favorited Favorite 19

about 8 years ago by McSarge verified purchaser

This little unit really delivers. It has great performance at a very low cost. Does everything advertised and more. The support by the manufacturer was tremendous. I needed to do a very particular I2C function and I was able to post my problem and get tons of help from other uses and the manufacturer himself. Using this in the Arduino environment made it very easy to program. I will definitely get more of these!

Really nice for the price

about 8 years ago by Member #390482 verified purchaser

I got this (misguidedly) for a ADB->USB converter for a keyboard I had, turns out I actually needed a ATmega32u4 based board, not this, so I couldn't use it for that purpose. It's been really nice for other things like low-level DSP, LED control, etc.

Good product, but hard to deal with 3.3V operation.

about 8 years ago by Member #542223 verified purchaser

I needed the smallness of the Teensy, so I could add it to a board containing other circuitry. It's nice to have more pins, too. But I am used to the 5V Arduino, so the whole 3.3V thing has been a little daunting. Couldn't get it to work with a 5V I2C LCD module, so am going back to the drawing board on that one. For most I/O, 3V operation should be no problem.

about 7 years ago by Member #365431 verified purchaser

I put mustered on it and ate that siht....

about 7 years ago by jokkebk verified purchaser

I really like tiny form factor devboards, and the Teensy LC blows the competition out of the water with unbeatable price and performance ratio. Compared to ATmegaXX8 based boards (most Arduino Minis, Adafruit Trinkets, and Sparkfun ones) this has native USB support which means it can become some very useful computer peripherals. I implemented an MIDI->USB bridge with literally 20 lines of code in Teensyduino. Very recommended!

about 7 years ago by kbob verified purchaser

I have used lots of Teensy LCs in lots of projects. The Arduino support is great, supporting all the hardware I've cared about. The chip is capable, with a good assortment of serial devices and high resolution ADCs. The clue level on the Teensy forum is high.

The Teensy 3.x is even better, but the LC is almost always good enough. (Notable exceptions: Teensy Audio Library and OctoWS2811 require 3.x.)

I just wish it had a reset button.

about 7 years ago by raster verified purchaser

I've probably used over 100 Teensy LC boards in projects, and they are quite awesome as USB HID devices. (Also, they are "Low Cost!")

about 5 years ago by Member #740248 verified purchaser

If you Arduino project could benefit from some speed, most lines of code or better peripherals this is the board for you!

Perfect For Many Small Tasks

about 5 years ago by timrprobocom verified purchaser

I've used other Teensy boards several times before and never been disappointed. Same situation here. I needed a simple way to drive a relay from USB, and for $15 and 15 minutes of coding, I have my relay. Simple, effective.

Great board for the price

The board does everything you would expect for a more expensive model.

Cons: 3.3v pin limitations ADC is choppy even with filtering Lack of documentation from SparkFun

What is says on the box: lower cost Teensy

about 4 years ago by Member #29524 verified purchaser

I've used Teensy 3.2 in a number of projects, but always only used a small fraction of the memory, even with pulling in various libraries. In the LC the biggest difference is less memory (though there are other features left out, only 1 ADC, no differential input PGA, ...) But you get a 32 bit ARM for less than the price of an official Arduino. This is a way faster chip. My loop() is running at 20,000 times a second, which is much faster than I actually need

Even tho I am an experienced c++ programmer I have been using the Arduino compatible Teensyduino compiler and libraries because there are a lot of Arduino drivers for I/O chips available. Usually these work fine on Teensy.

i had to put it aside for a while, because my mlx90460 project required more memory, but since i have created code that runs within its 8k of memory. of use are its faster spi/i2c data bus. with the arduino mega i can only run i2c bus up to 800khz (or that is what it is in settings, i have not hooked up ) o-scope to verify it yet, but on teensy (as well as 3.1/3.2) it can go upwards of 4mhz (only with devices that support those speeds, and only safely with read only operations)

Exactly what I've been looking for!

about 8 years ago by Member #551548 verified purchaser

The only thing that would improve this product is to ship it with pins to mount it to a breadboard. I can't seem to find anything that works perfectly for this during development.

Easy to use, programming from on board USB

about a year ago by Member #704199 verified purchaser

A lot of these small boards require a separate programming board, including my favorite "the SparkFun Thing." The Teensy LC programing via the on board USB.
I've used a lot of the functionality, including getting the sleep functionality to work, 3 separate hardware interrupts, I2c, PWM. Very cool, lots of I/O.

about 7 years ago by guiguigodro verified purchaser

Wanted physical buttons for my photobooth, done! With some searching in the interwebs, I made my own code with Arduino and it's a charm.

Just what I was looking for

about 7 years ago by Member #725309 verified purchaser

Its cheap, its small & its fast. Was looking for something to add extra functionality to an electronic toy and the Teensy LC did the job perfectly. I programmed it in C and used the download tool to flash it, but I did also try it out with the Arduino IDE and with the add-on installed that worked great too.

Lots of processing power and speed on a budget

about 7 years ago by Elecdonia verified purchaser

This board can do a lot for its cost and tiny size. Also the Teensyduino extensions for the standard Arduino IDE are excellent.