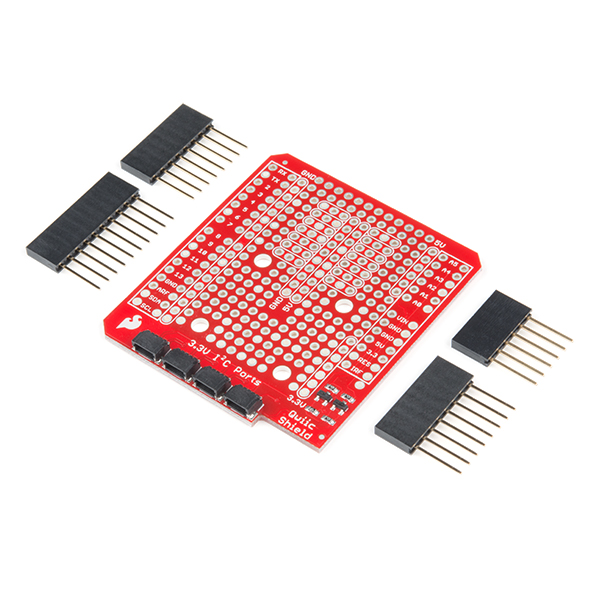 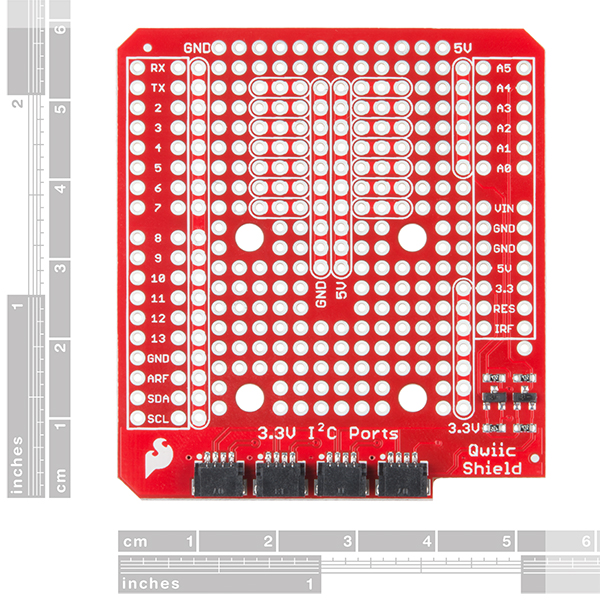 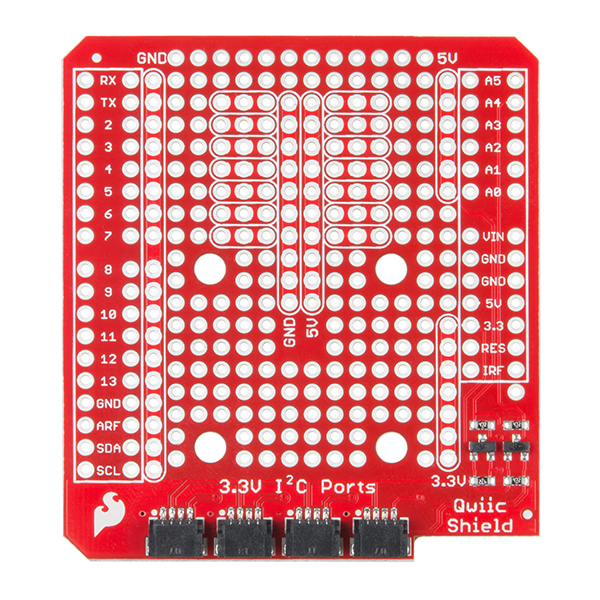 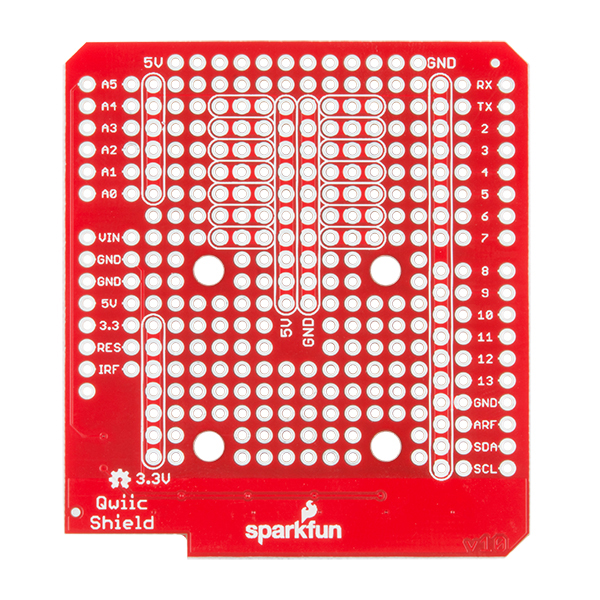 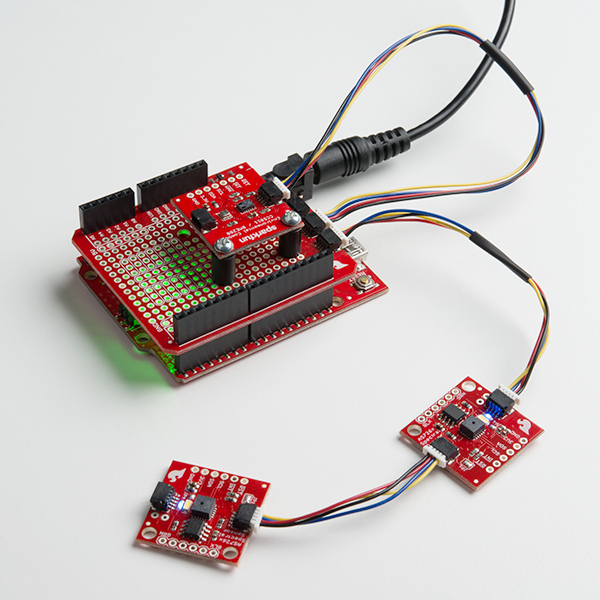 The SparkFun Qwiic Shield is an easy-to-assemble board that provides a simple way to incorporate the Qwiic Connect System with your Arduino Uno. This shield connects the I2C bus on your Arduino to a series of SparkFun Qwiic connectors and provides the circuitry to convert the 5V given to the 3.3V required by I2C boards in our Qwiic system. As long as your devices are on different addresses, the Qwiic system allows for daisy chaining, meaning you can stack as many sensors as you’d like to create a tower of sensing power!

The Qwiic Shield has four Qwiic connection ports, all on the same I2C bus, as well as a large prototyping area to design and make your own unique circuits. The shield also has a few 3-by-1 rails to help with prototyping, as well as buses for ground, 5V and even 3.3V. We have included four mounting ports in the same design as our Qwiic sensors, allowing you to affix your small board to the top of the shield.

This shield is a great retrofit for any Uno you may have. What a solder free solution? Skip the shield and checkout the SparkFun BlackBoard which has the Qwiic system built in!

Note: This includes R3 Arduino headers, but they are not pre-soldered onto the board, so some assembly will be required when putting the shield together.

Get Started with the SparkFun Qwiic Shield for Arduino Guide

It's now easier than ever to measure and characterize how different materials absorb and reflect different wavelengths of light. The AS726X spectral sensors allow you to detect wavelengths in the visible range (VIS) and near infrared range (NIR)!
Favorited Favorite 6

Figure out where in the world you are with the Qwiic SparkFun GPS Breakout - XA1110.
Favorited Favorite 4

Get started with our Qwiic ecosystem with the Qwiic shield for Arduino or Photon.
Favorited Favorite 5

Figure out how magnetic fields are oriented, all without having to solder a thing.
Favorited Favorite 1

The stackable headers are good quality, similar to the Uno (unlike the relay shield v2.0 flimsy header pins). The shield works, tested with Qwiic OpenLog so far, and passes through at least ground and 5v pins that I have tested.

One bad note: this is clearly tested on the Redboard, not the Uno with the large USB jack. There is a slight cutout on the board to avoid resting on the power barrel jack (where it says Qwiic shield printed on the PCB), but no such cutout on the other side for the USB jack. The board rests directly on this jack and prevents it from mounting evenly across all pins.

Nice concept, but under-delivered on promises

about 3 years ago by Member #732506 verified purchaser

Granted, I failed to see that this was designed for the Arduino Uno's specifically. However, the design choice to route QWIIC I2C bus's SDA and SCL to A4 and A5 (respectively) was, in my opinion, a bad move. This design choice essentially limits use of this shield to strictly the UNO platform. If you are a DUE user, such as myself, then this shield IS NOT for you. I had to utilize the protyping area to create my own I2C bus, and then tie back into the DUE's SDA and SCL. If the I2C bus was routed to the SDA and SCL pins, instead of A4 and A5, then the DUE's SDA1 and SCL1 could have been used. A jumper to allow the user to select either the SDA/SCL or A4/A5 pins on the headers would be nice for future revisions.

about 2 years ago by Member #142965 verified purchaser

I have two of these, using them to interface an OpenCR to over a dozen Qwiic (or other i2c) sensors/components.

I echo one of the other comments (the Due user who asked for jumpers to select between the SDA/SCL pins and the A4/A5 pins). Yes, please on that. I manually soldered air wires from the SDA/SCL pins to where the SDA/SCL traces meet the BSS138's.

If doing so, an additional switch/set of jumpers to set whether the Arduino (or other) is running at 5V or whether the i2c lines are already at 3.3V (as the OpenCR), thus to use or bypass the level shifter.

good substitute for a proto shield

I actually needed a proto shield at the time but they were on back order. So I purchased the qwiic shield as a good substitute and it worked great. Not using the qwiic bus at this time, but can now easily use it in the future and maybe free up a few more pins on the Arduino, which is controlling heating/cooling in an environmental chamber, reading & displaying temps, controlling a stepper motor driven metering pump, and recording bucket tips on a digital rain gauge in the chamber, all under a "multitasking" sketch.

Does what's on the label

about 3 years ago by Member #105257 verified purchaser

It's fine. Does exactly what's on the label. Nice to have the proto space in addition to the Qwiic ports. It would have been nice to have more buses/groups-of-3 and accommodations for TO-92 transistors, and perhaps to have both 5V and GND near both sets of IO port headers.

Could have been thought-out and tested better

This shield does not stack evenly because of interference with USB and / or power connectors on the Arduino, and does not work with Mega and Duo because it is hard-wired for Uno I2C pins only. Product description should at least mention that this is not for Mega or Duo.

Easy to assemble and works great!

After only a few minutes of soldering (even with my limited soldering skills) I was able to interface this shield with both my SparkFun Redboard and my Arduino Uno and collect data using the atmospheric sensor and 3-axis accelerometer Qwiic sensors that I purchased along with this. I've been using this set up for a few weeks now, and everything is working great.

No complaints, but can be improved

This shield worked perfectly fine on an UNO board, as it should.

However, I wanted to use it on a Mega (due to memory and pin availability limits of my intended project) and, like another review mentioned, quickly realized the minute difference in pins between the UNO and Mega. Again, this is only a problem because I'm using it on a board it wasn't explicitly intended to function on, though making use of the common SDA/SCL pins, instead of A4/A5 specifically, would have been nice.

It would be nice to eventually see an updated board that is a little more universal, but until then I'll just buy another and rewire it, since they're cheap enough.