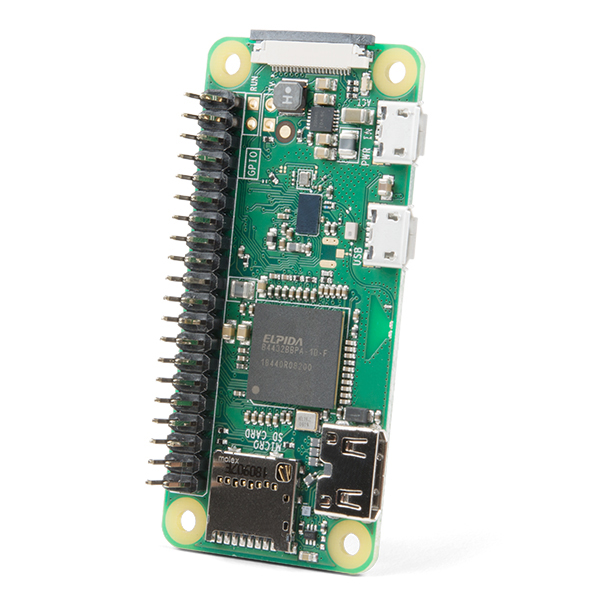 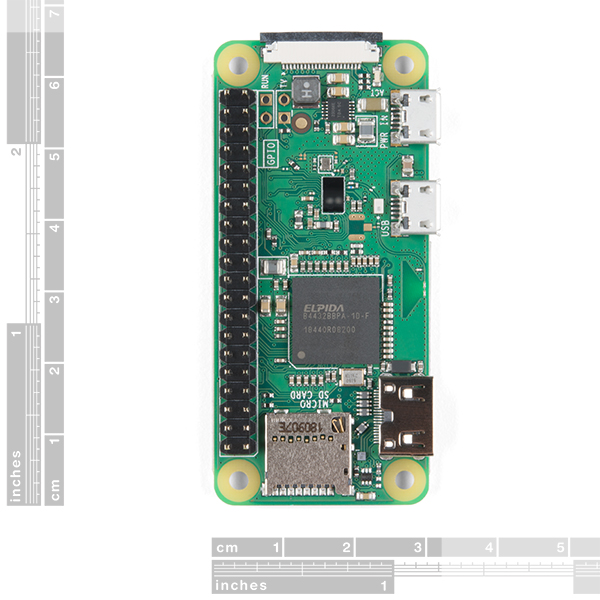 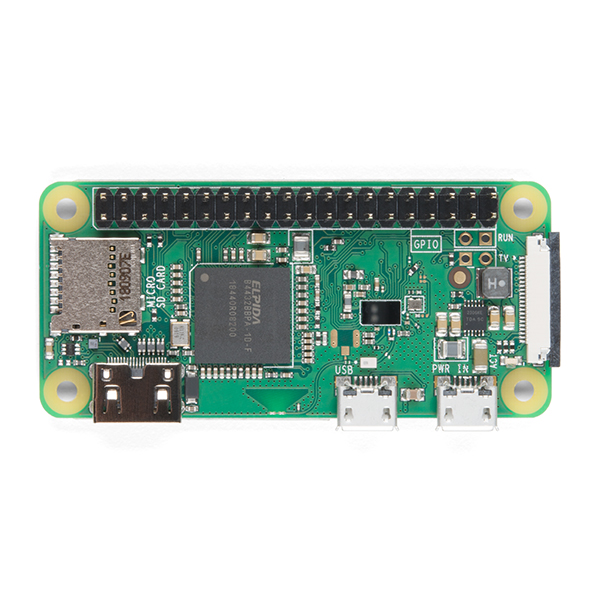 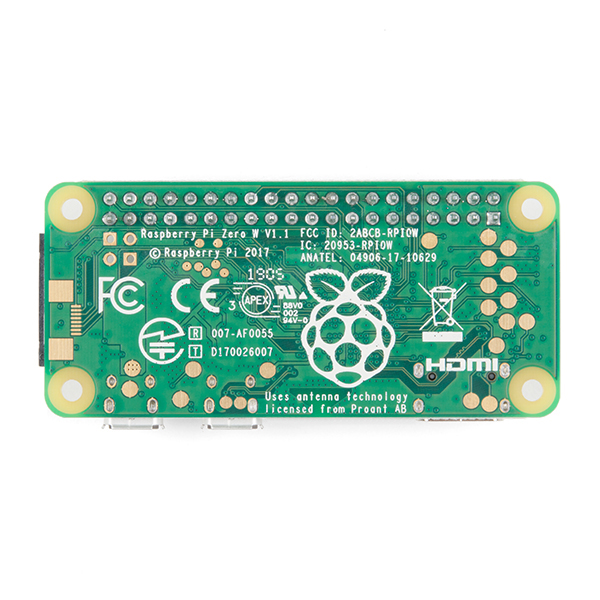 The credit-card-sized computer has become even smaller! The Raspberry Pi Zero W is still the Pi you know and love, but at a largely reduced size of only 65mm long by 30mm wide and now with headers! With the addition of wireless LAN and Bluetooth, the Raspberry Pi Zero W is ideal for making embedded Internet of Things (IoT) projects. The Pi Zero W has been designed to be as flexible and compact as possible with mini connectors and a populated 40-pin GPIO.

At the heart of the Raspberry Pi Zero W is a 1GHz BCM2835 single-core processor with 512MB RAM. Quite frankly, this Pi is about four times faster that the original Raspberry Pi and is only a fraction of the cost of the current RPi3.

The setup for the Raspberry Pi Zero W is a little more complicated than on other Pis. Because of the small size, many of the connectors on the Pi Zero are not standard. For starters you will want a Mini HDMI to HDMI cable or adapter to connect to your monitor. You will also need a USB OTG cable to connect a USB device, as well as a unique CSI camera cable. No matter how you want to use your Raspberry Pi Zero W, you will need a microSD card with an operating system and a high-quality 5V power supply to power your board.

Note: As of the release of the Raspberry Pi Zero W the NOOBS image will need to be updated to work on Pi Zero boards. You can download the image here.

Get started with the Raspberry Pi Zero Guide

Use matplotlib to create a real-time plot of temperature data collected from a TMP102 sensor connected to a Raspberry Pi.
Favorited Favorite 14

Using Flask to Send Data to a Raspberry Pi

In this tutorial, we'll show you how to use the Flask framework for Python to send data from ESP8266 WiFi nodes to a Raspberry Pi over an internal WiFi network.
Favorited Favorite 7

How much impact can the human body handle? This tutorial will teach you how to build your very own impact force monitor using a helmet, Raspberry Pi Zero, and accelerometer!
Favorited Favorite 2

How to Use Remote Desktop on the Raspberry Pi with VNC

Use RealVNC to connect to your Raspberry Pi to control the graphical desktop remotely across the network.
Favorited Favorite 8

Tkinter is the standard graphical user interface package that comes with Python. This tutorial will show you how to create basic windowed applications as well as complete full-screen dashboard examples complete with live graph updates from matplotlib.
Favorited Favorite 24

Get your Basic Autonomous Kit for Sphero RVR all hooked up with this guide!
Favorited Favorite 1

This hookup guide will get you started with connecting and using the Pi Servo pHAT on a Raspberry Pi.
Favorited Favorite 4

Getting Started with the Raspberry Pi Zero Wireless

Learn how to setup, configure and use the smallest Raspberry Pi yet, the Raspberry Pi Zero - Wireless.
Favorited Favorite 16

This tutorial will show you how to assemble, program, and access the Raspberry Pi Zero as a headless wireless pan-tilt camera.
Favorited Favorite 11

How to Run a Raspberry Pi Program on Startup

In this tutorial, we look at various methods for running a script or program automatically whenever your Raspberry Pi (or other Linux computer) boots up.
Favorited Favorite 18

Get your Advanced Autonomous Kit for the Sphero RVR built up with this hookup guide!
Favorited Favorite 0

Get started interfacing your Qwiic enabled boards with your Raspberry Pi. The Qwiic pHAT connects the I2C bus (GND, 3.3V, SDA, and SCL) on your Raspberry Pi to an array of Qwiic connectors.
Favorited Favorite 2

Get started with the CCS811, BME280, VCNL4040, and microOLED via I2C using the Qwiic system and Python on a Raspberry Pi! Take sensor readings from the environment and display them on the microOLED, serial terminal, or the cloud with Cayenne!
Favorited Favorite 1

about 2 years ago by phamilton verified purchaser

This is one amazing little device for the price and even for the specs!! I migrated my solar water controller from arduino over to this. I have built in all sorts of new features like data logging, web access to temps, logging to remote server etc. All of this can be done w Arduino, but having everything on one beard (wifi, bluetooth, SD) makes things MUCH easier and simpler

Works perfectly for my application.

The pi zero works perfectly for my particular non-CPU intensive application. It is being used with a MMDVM modem for a digital radio node. Specifically DMR. I find the normal raspberry pi to be much faster at boot up however these little pi zeros are cute and draw almost no power. Mine is used in a mobile environment. So yeah! I'm ordering more.

Exactly why I entered the store

It is working perfectly near as I can tell. I put a HAT on it. Stuck a memory card in it. and just like that the system was on line and running porting Digital audio both ways.

I have several Pi-Zero-W's some with hats some without doing much the same job.

Makes a scaled down Raspberry PI accessible for compact projects.

about 3 years ago by jeffjblack verified purchaser

Sure it's not as zippy as the new 4B. But what is? This is a great size for embedded projects. IoT, Model Rocketry, RC Aircraft, Robotics. Great price too!

Worked out perfectly, used it to replace a defective Pi Zero W board from a Zumspot kit. Ordered a second one on to build a ham shack world clock....

I like the range and amount of product information that Sparkfun provides. Always accurate and to the point.

Great Alternative to Arduino When Wifi is Required

about a year ago by Member #707618 verified purchaser

The Pi Zero W has comparable power requirements to an Arduino with attached wifi shield. For applications requiring ADC the Pi Zero can be attached to the I2C ADS1015 sensor. Many other I2C sensors are also available. Plus, with a Pi Zero, I can code in interpreted languages like Python, and setup a web based (http) user interface, as well as store substantial data in an rrdtool database stored in the SD card.

My most recent Pi Zero project involves using a Pi Zero with an INA260 power sensor to monitor power consumption at a remote amateur radio installation. The power sensor monitors power consumption of an amateur radio mesh network node (www.arednmesh.org). The Pi Zero runs an Apache web server which allows any computer on the mesh network to view a web page showing the power being consumed by the node. You can see project details at https://github.com/fractalxaos/ham/tree/master/nodepower