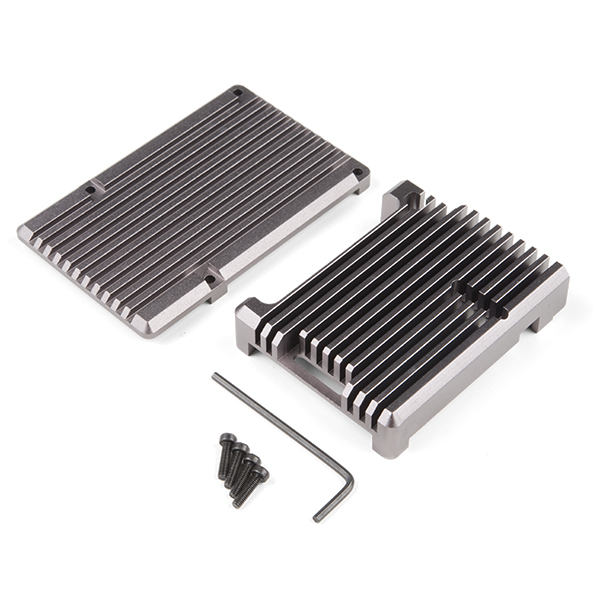 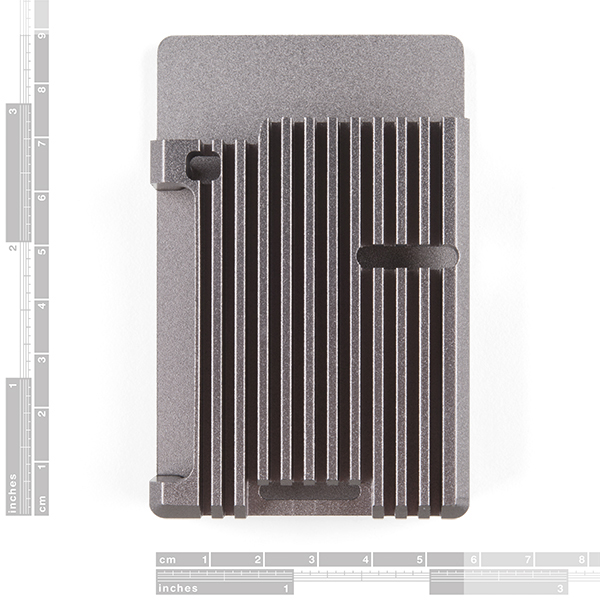 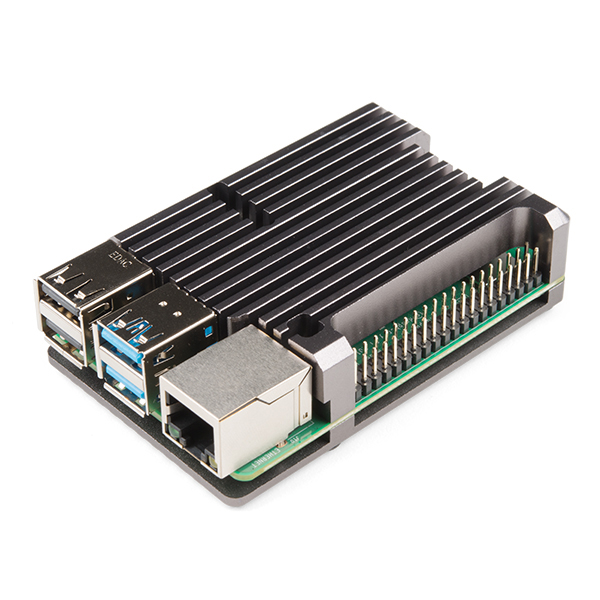 Why use a heatsink and a case, when you can use a heatsink case?! This magnetite grey, anodised aluminium case for the Raspberry Pi 4 will give you 10-15°C of passive cooling under a full CPU load. This case is great for situations where you want completely silent cooling, like home media centers.

It comes with a thermal pad to provide thermal contact between the CPU and top case, and a handy Allen Key and set of hex bolts to attach the case together.

The case gives you access to all of the ports, pins, and connectors. You can just about get away with using low-profile HATs and pHATs (those without bulky components on the underside) using one of our tall headers, but be extremely careful not to short any components on the metal top case!

Guide for hooking up your Raspberry Pi 4 Model B basic, desktop, or hardware starter kit together.
Favorited Favorite 1

about 2 years ago by Member #157014 verified purchaser

This is a very solid piece of kit. The Pi 4 is reporting a constant 36°C while running in this box. When you put your hand on it, you can definitely feel the heat that has radiated off the chip and into the aluminum.

about 2 years ago by Brandon Haines verified purchaser

I've rolled out two of these in the last month. Generally, they work quite nicely, look good, and are at a low price point.

Where the entire product falls apart is the terrible instructions. Other reviewers and commenters are definitely not wrong about the thermal pads being a headache, especially with the lack of effective instructions. (Consider that the feedback on sparkfun is unevenly distributed across all the available colors.)

1) The thermal pads documented as "extra" are not extra. All three thermal pads appear to be intended to be deployed on all three contact points on the upper heatsink. (I only realized this when I was deploying my second heatsink so I had to go back and roll out to the first heatsink - no issues doing so.)

2) I am not sure what the "right" way to get the packaging off the thermal pads is, but here's the recipe I sort of worked out for myself: Most importantly, whatever you do, take off the white side first. The clear side is WAY easier to remove - you desperately want that extra structural integrity provided by the clear side when removing the more difficult white side - I suspect this is where most people are having issues with the thermal pads disintegrating on them. In removing the white side, I'm still unclear what the intended design is - in about half of the pads, I was able to separate the white from a very thin layer of clear plastic with adhesive - when this thin layer was left on the pad, it seemed to help maintain its integrity - leaving this thin plastic layer doesn't seem to be impacting thermal conductivity as far as I see.

To get a 5/5 they need to provide better thermal pads (I'd happily pay an extra dollar or two to avoid that headache) or even the extras that the documentation claims - especially given how brittle they are. Also, there were some small manufacturing defects and superficial rust - I'll call this consistent with the price point, but not enough that I'd hold this the product up as exemplary.

Sparkfun could have made my life easier, independent of the manufacturer, if they provided (ideally, sold) a recommendation for higher quality thermal material for folks who don't want the headache and are willing to pay to avoid it.

This one works well.

about 2 years ago by Member #949 verified purchaser

I have tried other heatsinks for a Raspberry Pi 4, but this one works well. It lowers the CPU temperature some 20 degrees C below the no heat sink temperatures It allows full access to the 40 PIN i/O connector, unlike others I have tried, which required me to hack on the heatsink with a file, before I could insert a 40 pin connector. If you are going to use the 40 pin I/O connector, you will need to use the "extended" type connectors, since the top of the heatsink is pretty much at the top of the pins.