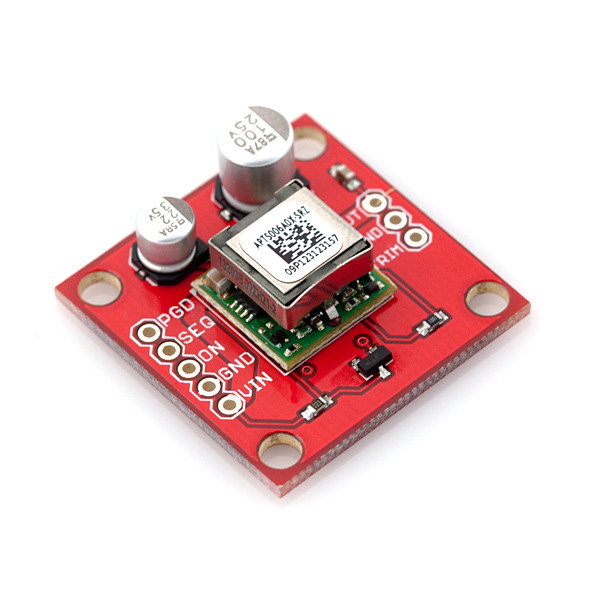 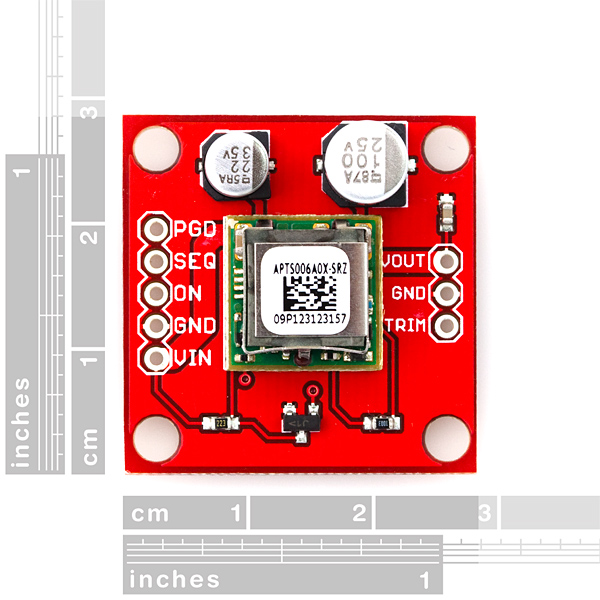 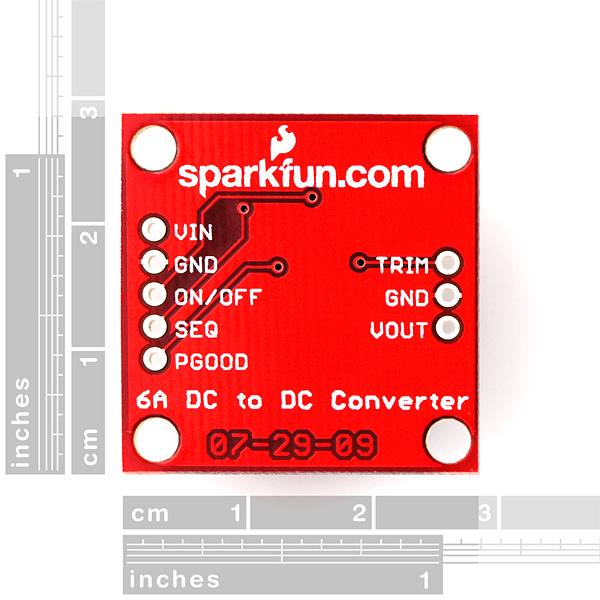 This is a breakout board for our non-isolated, 6A DC-to-DC Converter Module. The module can convert any DC voltage between 4.5-14VDC to a selectable voltage between 0.59 and 5.5VDC.

To set the output voltage to the desired level, a resistor must be added between the Trim and GND pins. For example, to set the module to output 5V use a 1.34kΩ resistor, or to get 3.3V use a 2.182kΩ. See table 1 in the module's datasheet for more resistor values.

The ON/OFF pin on the board can be pulled high to turn the converter module on and low to turn it off.

Board comes as shown, with all components (aside from the trim resistor) populated. Access to all pins of the converter module is provided by two, 0.1" pitch headers.

about 7 years ago by Member #529167 verified purchaser

Bought this little board to use for project testing and it has become very invaluable to me now. It is easily breadboardable and works excellent! I recommend this to anyone doing electronics design!

about 7 years ago by Member #423702 verified purchaser

I bought this DC/DC converter to use in my plating experiments because I need a controlled voltage around 1 volt. I can use a 6v or 12v battery and dial in the voltage I need. It's so much more efficient than a voltage regulator that just burns off excess power and when your power source is a battery, that is very important. In addition, I can also use it as a benchtop power supply when working on circuits for my robot projects and, if needed, I could charge a USB device from a 12v battery.

It works as advertised and I'm greatful

about 7 years ago by WemblyTinkerer verified purchaser

I've been looking for something to drive herds of LEDs for portable lighting and giant clock digits. If you are going to drive this much past 3-3.5 amps, a heat sink against the square metal hybrid case is a good idea. I'm looking forward to applying this little item in some other high current applications.

The board is clearly labeled, logically laid out, thick, plated through, with construction and engineering that shows that Sparkfun knows what it's doing. So far, the guide and data sheet have allowed me to easily apply this converter to an Arduino driving ravenous LEDs.

The resistor values called for in the data sheet for the various voltages are precise. There is ample room on the back of the board to chain a couple of them together to get close to the desired value for your voltage.

If you need a higher than average current buck converter. This part is definitely recommended.

about 5 years ago by Member #343890 verified purchaser

I have found this power-converter very useful for driving 5V devices that require a lot of current, such as a Raspberry Pi with attached spinning disks, off 12V lead-acid batteries, that work as an UPS of sorts. The efficiency is good, and it Just Works.

With two 2.7 kiloOhms 1% resistors in parallell between TRIM and GND, this becomes. 1.35 kiloOhms and makes the regulator output 5 V.

Only caveat is the ON input really, since this drives the gate of a logic-level NMOS transistor, the voltage here shouldn't be much more than about 5 V. I used a 4.7V zener diode and a resistor to limit the voltage here.

On the other hand, when I have wanted to have a mechanism for shutting off the power, delayed after the Raspberry Pi has sent out a "shutdown request" to a separate microcontroller, having a secondary low-power 5V standby supply for this, via an LM78L05, this on/off control works great. Since the microcontroller that I use has several analog inputs, I use it for supervising various other voltages in the vicinity.