Retired DEV-11230 RoHS Open Source Hardware
Note: Retired Product
This product has been retired from our catalog and is no longer for sale. This page is made available for those looking for datasheets and the simply curious. 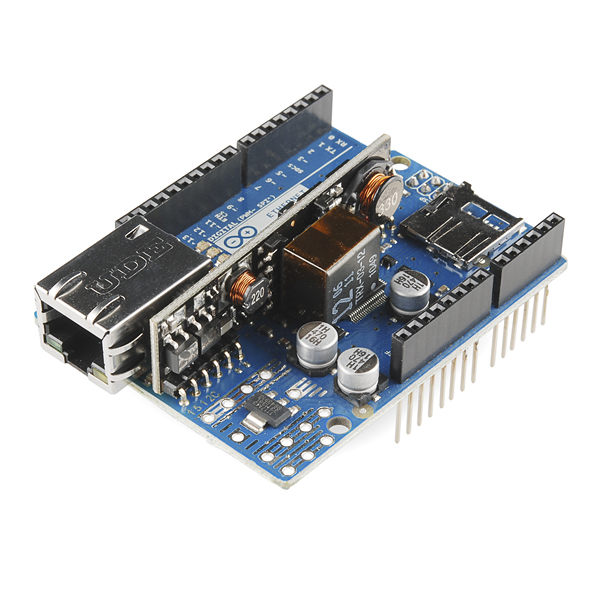 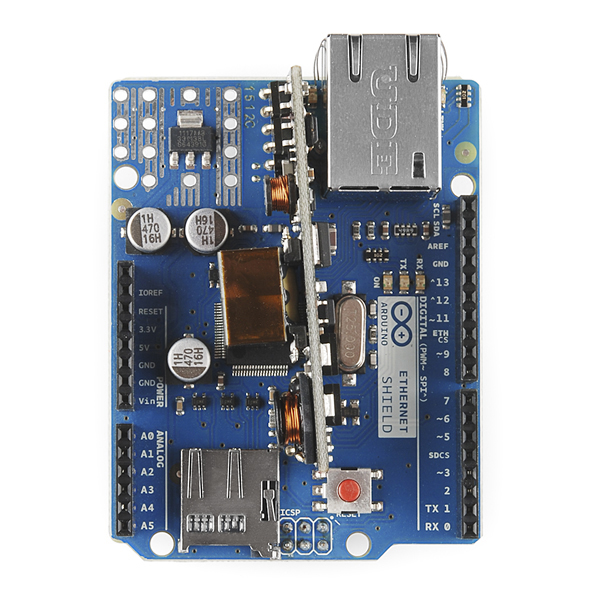 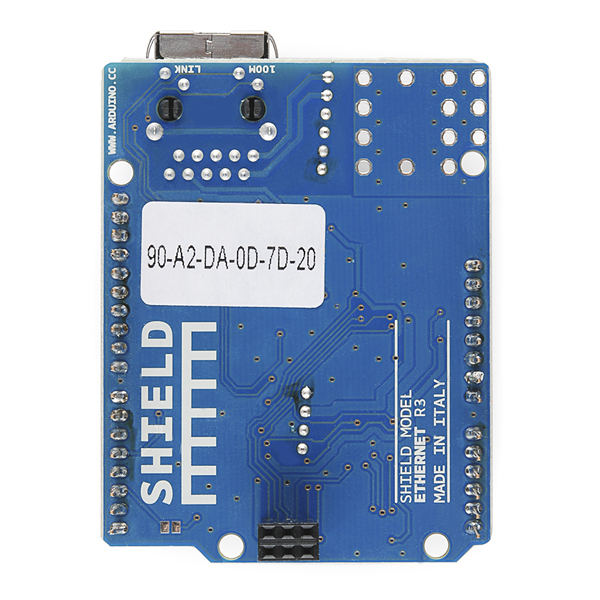 Retired DEV-11230 RoHS Open Source Hardware
Note: Retired Product
This product has been retired from our catalog and is no longer for sale. This page is made available for those looking for datasheets and the simply curious.

As you may already know, the Arduino Ethernet Shield allows an Arduino board to connect to the internet, which is awesome. It's based on the Wiznet W5100 ethernet chip providing a network (IP) stack capable of both TCP and UDP. The Arduino Ethernet Shield supports up to four simultaneous socket connections. Use the Ethernet library to write sketches which connect to the internet via a standard RJ45 Ethernet jack using the shield.

The Ethernet jack can also be used for power, did you know that? Check it out: Power over Ethernet, or PoE for short, is a system that's designed to pass data and power, safely, over the same Cat5 cable. You may have noticed the odd headers on the Arduino Ethernet shield (The line of holes at an angle to the rest of the board) Well those are there so that you can install a PoE module. We've included that PoE module on this one! The Ag9120-S.

The Ag9120-S is a module designed to extract power from a conventional twisted pair Category 5 Ethernet cable, conforming to the IEEE 802.3af Power-over-Ethernet (PoE) standard.It provides the PoE compatibility signature and power classification required by the Power Sourcing Equipment (PSE) before applying up to 15W power to the port. The high efficiency DC/DC converter operates over a wide input voltage range (36V to 48V typical) and provides a regulated low ripple and low noise output. The DC/DC converter also has built-in overload and short-circuit output protection.

Aside from the inclusion of the Ag9120-S module, this is the same Arduino Ethernet Shield we've been selling, which means it has a micro-SD card slot, which can be used to store files for serving over the network. It is compatible with the Arduino Uno and Mega (using the Ethernet library). You can access the on-board SD card slot using the SD library which is included in the current Arduino build.

It also includes a reset controller, to ensure that the W5100 Ethernet module is properly reset on power-up. Previous revisions of the shield were not compatible with the Mega and need to be manually reset after power-up. The reset button on the shield resets both the W5100 and the Arduino board.

Note that because the W5100 and SD card share the SPI bus, only one can be active at a time. If you are using both peripherals in your program, this should be taken care of by the corresponding libraries. If you're not using one of the peripherals in your program, however, you'll need to explicitly deselect it. To do this with the SD card, set pin 4 as an output and write a high to it. For the W5100, set digital pin 10 as a high output.