Controlling an Arduino with an iPhone

In this tutorial you will learn how to communicate between the iPhone/iTouch app TouchOSC via a WiFi network to a Processing sketch displaying graphics and finally to control an Arduino board to light up an LED.

TouchOSC is just one of many iPhone/iTouch apps that can send Open Sound Control signals. I particularly like TouchOSC because it's stable, it’s only $4.99 and most importantly comes with a really easy to use iPhone interface builder for your computer. There are many applications and hardware devices that can transmit and receive OSC signals, so don’t think that you need an iPhone/iTouch to play with OSC.

Processing is a great application for quickly creating visualizations, interactive installations, and physical computing projects. Processing is free to download and has a large community at Processing.org. Arduino and Processing are also built on the same interface and look nearly identical. 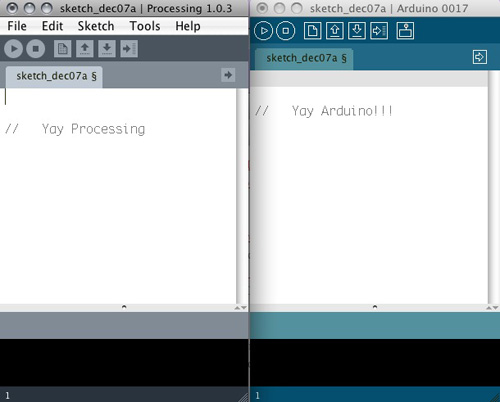 First thing we’ll need to do is to create a simple circuit with an LED, a resistor, a breadboard, some jumper wires and an Arduino board connected to a computer via a USB cable. 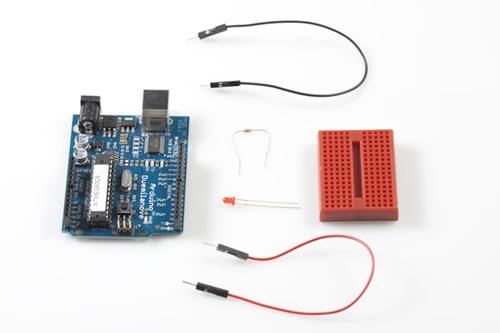 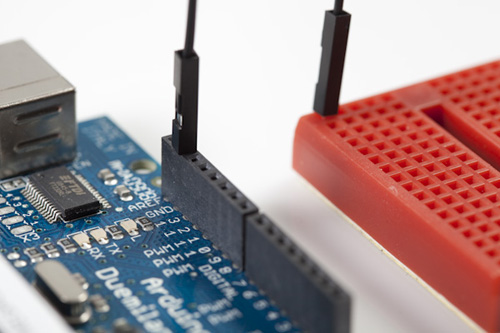 Notice that the LED has two different length leads coming out the bottom, the shorter one is the negative lead. 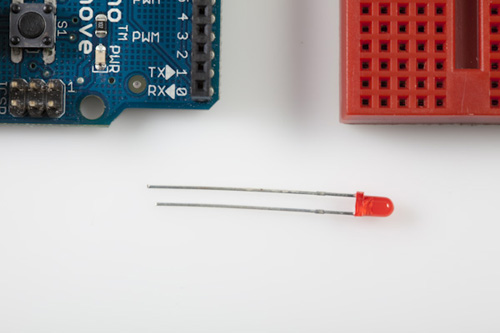 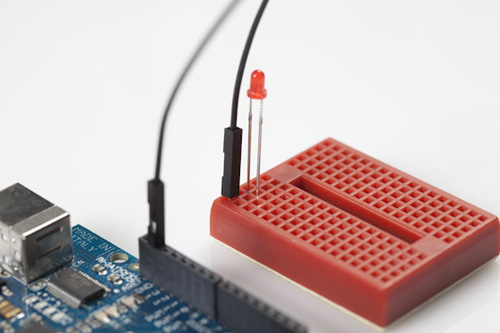 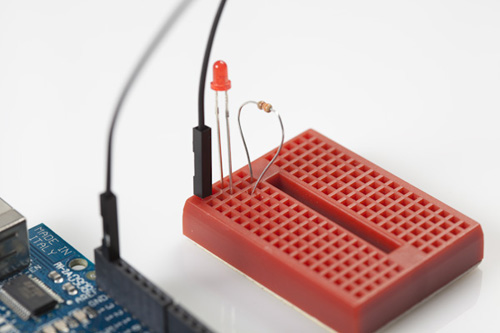 Next connect the red/positive jumper to pin 11 and the other end of the red jumper into the same row of the end of the resistor (The third row). 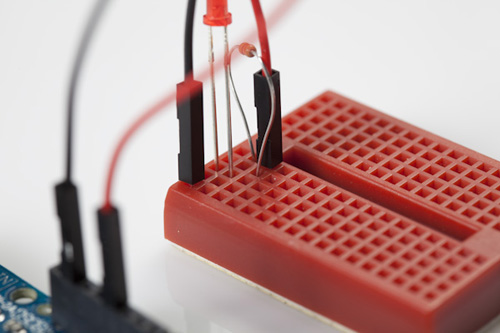 
Make sure your Arduino is plugged in via the USB cord and load up the Arduino software on your computer. You can download Arduino and find a lot of resources at www.Arduino.cc.

Alright, now let’s open up Arduino and program it to look for specific characters via serial.

You can download the Arduino sketch here, or simply copy and paste it from below.
Here is the source code, copy it into the empty Arduino window:


You can go through and read the comments to learn more about what each line of code is doing.

Great, now save your Arduino sketch by going to the File menu, then Save As.

Compile/verify your sketch by hitting the play button, wait for the status bar to say “Done compiling”.

Upload the code to your Arduino board by selecting the right arrow button in the Arduino interface.

Once uploaded open the Serial monitor and try typing an upper case “R” and hitting enter, this should make the LED light up. If you type a lower case “r” it should turn the LED off.


Creating and Running the Processing Sketch:

You can download the source code here, or simply copy it from below and paste it into an empty Processing window:

You can go through and read the comments to learn more about what each line of code is doing.

Now Run the Processing sketch by hitting the play button, it looks very similar to the Compile button in Arduino.

Once you have downloaded and installed the TouchOSC editor open it up. Right click on the black empty interface window and select Toggle Button. 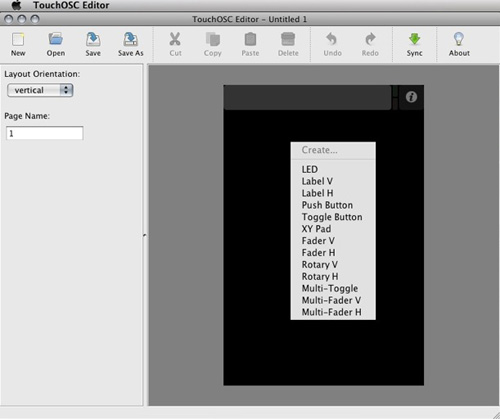 Make sure that you leave the name of the toggle button as “toggle1”.

Save your interface as whatever name you want, select SYNC.

Next you’ll need to download the TouchOSC app from the App Store and cost $4.99. Once installed hit the info button at the top right of the program, then select Network.

The host should be the IP address of your computer running Processing.

On an Apple computer:
You can find this by selecting the Apple at the top left of your screen, then selecting “About This Mac”.

On a Windows computer:
To find the IP address of a windows computer, open the Command Prompt (You can do this by typing 'cmd' in a 'Run' Window). Then type 'ipconfig' in the command prompt and press enter. The IP Address will be listed.

Once you have found the IP address of the Host, change it on your iPhone.

Select “Layout”, then “Add”. You should see your Host computer’s name come up, select it to download the interface you just created using the TouchOSC editor.

Next select your new interface from the list of preset interfaces.

The toggle button you created on your iPhone should now turn the LED on/off and update the Processing graphics in real-time as well.

Congrats, You're Done!!! Now what?

Now if you want to take things a bit further you can swap out the Arduino code that is triggered to do anything else that you have seen Arduinos do. Here is an example of TouchOSC controlling a couple fans using the same lessons taught in this tutorial. One of the first projects I did with this iPhone controlling Arduino idea was build an iPhone controlled tank, the source code for both Processing and Arduino can be downloaded here.

TouchOSC has a whole variety of buttons, toggle switches, rotary faders, vertical and horizontal faders and even an XY touchscreen interface. Try experimenting using the Processing examples on the TouchOSC website.

Also TouchOSC is not the only app that can send OSC signals, there is also MrMr which is free, but I found it a bit buggy and slightly more difficult to use.

Also if you have an Android phone, you can download FingerPlay MIDI to send OSC messages. Just make sure it is sending the OSC signal: /1/toggle1/value

Since mobile phones seem to only be getting more connected and jam packed full of great sensors like multi-touch, gps, and accelerometers, I have no doubt that this is just the beginning of what our phones will be able to control and interact with.