Document your failures, right? Here's some of the gotchas and ideas that, if you decide to launch your own balloon, may help ease the pain.

Have a full tank of gas. You will be driving a tremendous amount (nearly 300 miles in one day) depending on conditions. You really don't want to be 4 miles into a corn field, 30 miles outside of no where just to have your gas light turn on. It's bad. 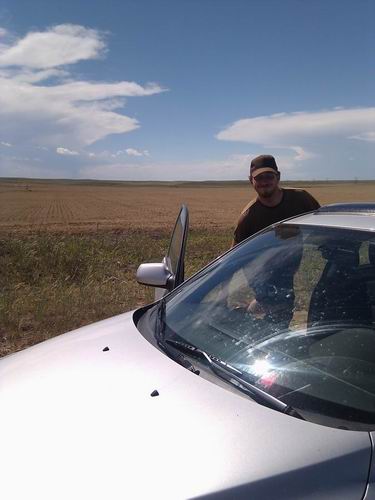 Bring a friend. Rob and Felicia were nice enough to join me on this wild adventure. It was really great to have other folks there to help. A radio operator, a driver, and a navigator are usually needed. If you've got a really good software/tracking setup, it can usually supplant one of these positions. The way it worked for us, Felicia would read off the various bits of incoming data. One of the following was transmitted by the box every second: Lat, Long, Alt, Pressure, or Box temperature. She was pretty good at throwing out garbled messages (humans make great data filters) and relaying the received coordinates to Rob who would then find that point on the map (took some time). Rob would then have to decide a course and tell me where to drive. It was quite cumbersome, but it worked. It worked until the balloon decided to go south east and the highway we were on turned directly north. 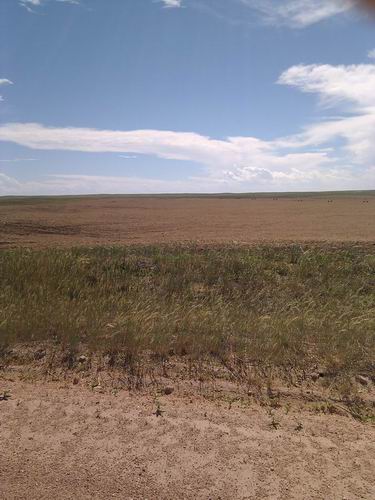 Have lunch in the car. Balloons don't take a break. If you're in the chase, you don't want to stop. And around 2PM, you'll be hungry as you go tromping through the weeds looking for your precious balloon. Have lots of water. It can be a bit desolate out there.

Bring a paper map. Bring a good one with GPS grids. We knew that cell phone reception (ie, GoogleMaps) would probably not work, so we brought along the Colorado Atlas and Gazetteer atlas with GPS grids. One of the most frustrating and scary things where the seams on the map. The balloon insisted on flying a path just slightly in between the bottom of one page, and the side of another. This caused some major problems, flipping back and forth, checking scales and trying to convert GPS coordinates on the fly. I've heard some people bring a GPS car nav system. While we did make some mistakes choosing which routes to take, I'm unsure how helpful or fast it would be to type in lat/long into a nav system especially with the spotty records of roads this far out.

Bring an inverter. There will be lots of laptops and electronics needing juice. You'll need a DC to AC inverter to charge it all from the car's cigarette adapter. If you're paranoid, bring two. 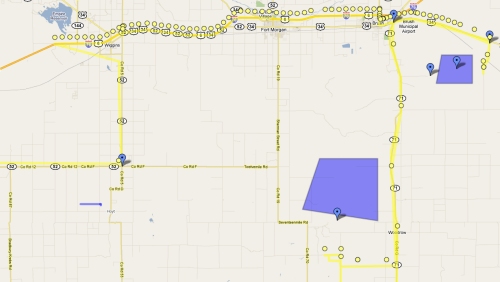 Bring a GPS logger. Rob was smart enough to kick on his Android and start logging our GPS coordinates. You can check out the overall path that we took (including the spot where I got pulled over for speeding). We drove all over the place trying to estimate where the balloon might be coming down and/or have landed. Be patient, it takes a second or two to load into Google Maps.

Be able to tether your cell phone. What we found surprised us - there is actually cell reception in some far off places. During the whole GPS mapping/tracking debacle, we found ourselves in the middle of a wheat field. Rob pulled out his phone and discovered we did have limited data connection. It could have been REALLY helpful had we had access to google maps the entire time! Next launch, I will probably use google maps via cellular first, then local mapping software on my computer next, and then the paper map as a last resort.

Find a software mapping solution. Ideally, the computer would receive the periodic updates from the balloon. I intend to write a VB or python script to bring in these bits of data, check them for errors (a simple checksum or known data width would suffice), and then reform the information into NMEA sentences that Microsoft Streets and Trips can understand. I've looked into all sorts of offline mapping programs (load up google maps onto your laptop!). Unfortunately all the programs I've found are fairly limited in their abilities, interface, or API for inputting a given long/lat coordinate. I don't need driving directions, I just need you to put an arrow right where this coordinate is! If someone has a better suggestion, we are all ears.

Test your radio. This goes without saying, but this balloon was lost because 'hoping it would work out' overcame common sense. But sometimes this is the only way to truly learn. For the next flight, we will be using a different radio system. Possibly audio based with decent output power, with more sensitive receiver, and no digital protocol to delay possibly good data (just raw 1s and 0s). I have considered using a cellular backup and based on our field tests, there is a good likelihood we would have cellular reception a few hundred feet above the ground to transmit a text message. Take a day and drive into the country - see how far you can get reception with your radio on the ground. Blind yourself, spin around in a circle a bit, and try to locate the transmitter by any means but visually. On the day of the launch, you will have no idea where the balloon is - see if you can locate it by antenna direction.

A better name tag. I did put my name and phone number on the outside of the payload, but regrettably, it was not laminated so I assume it is destroyed by now. For future launches, I will include a hardily protected name/contact/information sheet on the payload. Possibly a PCB that has the info etched in copper - that should last for awhile, right? Thanks to DaveP on the SparkFun comments, I see that some payloads have taken as long as 815 days to be found! So you're saying there's a chance... 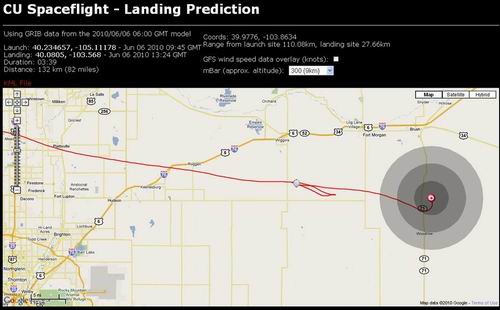 Predict your flight. This suggestion comes from StillDavid. There is a surprisingly accurate balloon flight predictor that will help you get an idea of how far the balloon may travel day of, and where it might be headed. I ran this the night before, and then the following morning before the flight. Finally, when the balloon had not been heard from for an hour, we pulled out Rob's laptop (in the middle of the wheat field) and re-run the prediction. We got variances each time but it gave us some direction which was very helpful, if not fruitful.

There are tons of good resources out there on google. Here are a couple that we read:

It's always good to read the FAA regulations. Don't take my word for anything. This link directly to the FAA site may work. If not, you can check some of the other sites that have posted and interpreted the regulations for us mere mortals.

Flight prediction site - already discussed but it's important enough to list it twice. If you want to run a prediction, you can use our numbers. We launched from 40.234657,-105.1117. The altitude at that GPS coordinate is about 1600m. I leave all the other settings alone (Ascent rate, Burst altitude, etc).

Edge of Space Sciences - they seem to be the go-to guys for university programs. According to the WORPK records page, EOSS has had 145 total missions! They know exactly what they are doing and how to get it back down to the ground. Very impressive work and they even keep their site updated! There was a successful launch/recovery on July 10th, 2010.

Parallax has a decent tutorial written by Dave Harper. (Did you launch in front of your house?!) I do love that he put 'REWARD' in big letters on the outside of his payload. Good idea! There is also a rather large book called Near Space written by Paul Verhage. I haven't read through it all, but it's freely available on their website. Thanks Paul!

VPizza is a good site, but running Linux? Really?