Let there be light... (Of many fabulous colors!)

This is a quick little assembly guide to show you roughly how we intended for a Rebel Triple Play LED board to go together with a Triple Play Driver Board and a heat sink. In the end, I'll give you some pointers on operation and a code example that will work with an Arduino. So let's dig in!

Also, this guide can be used with the single driver board. The assembly will be the same, it's just that you will only be controlling a single LED instead of 3 discrete LEDs.

There's a couple different ways you could put this pile of stuff together. For example, you could 1) use the single driver together with the white Rebel Triple Play board to have a single, really bright light with a single PWM control, or 2) you could use the triple driver board with the RGB Rebel Triple Play board to get PWM control on your three channels of red, blue and green. These are the most likely choices as the other choices offer only silliness. I'm opting for option 2, but I'll point out the differences in the options as we go. 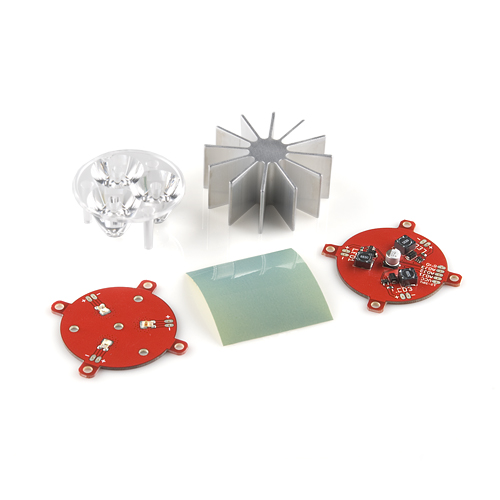 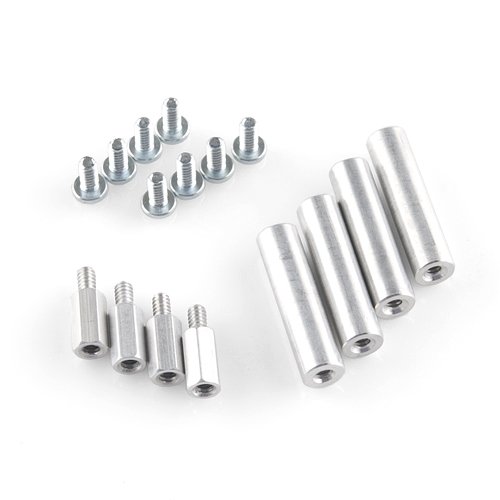 OK, what you don't see in any of the pictures here is the mess on my desk that normally accompanies all my work. While I'm at least accustomed to working in such conditions, you may not be. Tidy up as necessary, or your parts may find ways to elude you. We have the luxury of taking photos away from our cluttered desks to give the illusion of organization.

First, grab your heat sink and some fine-ish sandpaper. Why? These heat sinks are extrusions and cut to length by the manufacturer. And they're not always the smoothest surface, which is what we want to conduct heat better through the thermal adhesive tape we're going to use. I had some 600 grit lying around, so I used it. That worked well enough to knock down the big ridges, but still left the surface smooth enough to allow good heat transfer. Wet sanding can provide a ridiculously smooth and even surface as well.

When you feel good about your surface, you can mount it to the Triple Play LED board. Try to clean your heat sink pretty well before this, otherwise you won't get good adhesion and thermal transfer. The tape is double-sided, so peel off the protective covering on one side and press it down roughly centered on your freshly cleaned heat sink surface. Go around each fin and press the thermal tape down good with your thumb or the butt end of a screwdriver. Put some weight behind it. The better the contact, the better it'll do its job. After this, trace around the outside with an x-acto knife or something similar (razor blade?) like so: 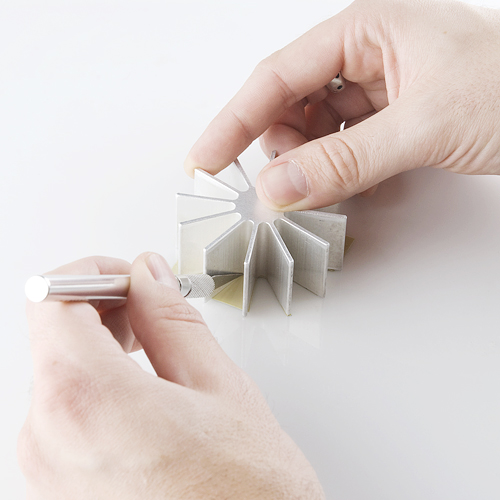 After all that, assuming you still have all your fingers you will be left with something that looks like this: 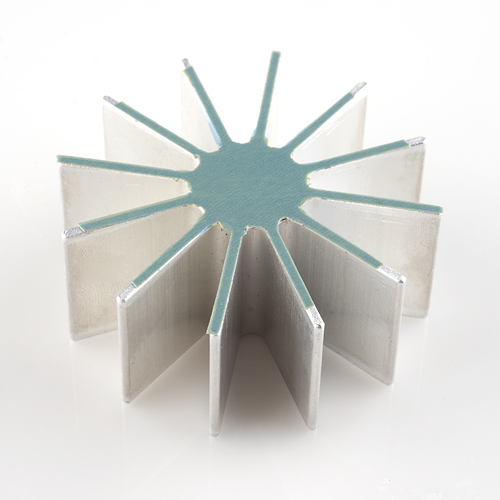 Now you can mount the heat sink to the LED board. Position the board such that all of the pertinent holes (for wiring, for mounting the lens, for standoffs) fall between the fins of the heat sink. When you're satisfied with the position, peel off the outer layer and expose the adhesive and press the board down good. Again, the better job you do, the better the heat sink will do it's job. The hole in the center of the board will be covered in this example. The hole is in the board to give the user an option to bolt on a different heat sink. 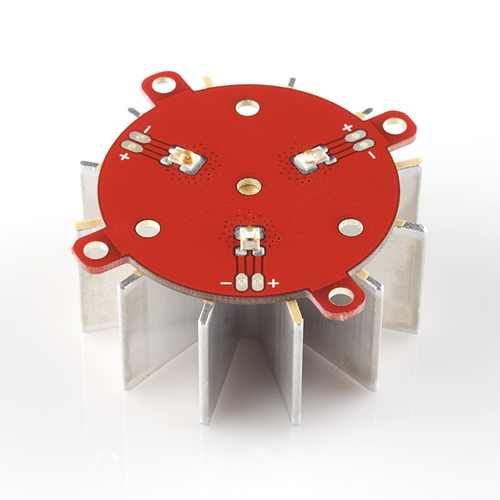 Now you can mount the lens, which will plug into the board in the three holes that alternate between the LEDs. To hold the lens in place, turn the assembled parts upside down and just melt the posts that are sticking out the other side of the LED board with your iron. 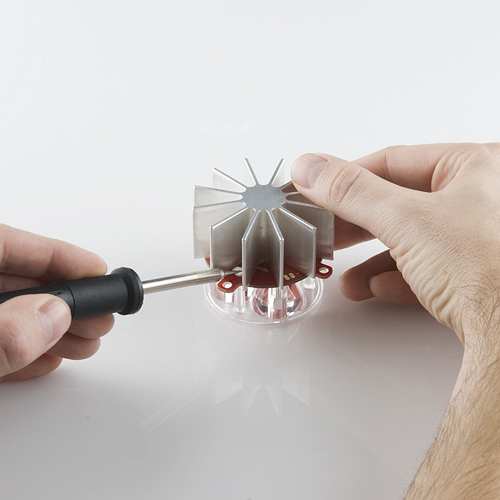 When you've got that done, you can install the standoffs with the screws to the tabs on the outside of the board: 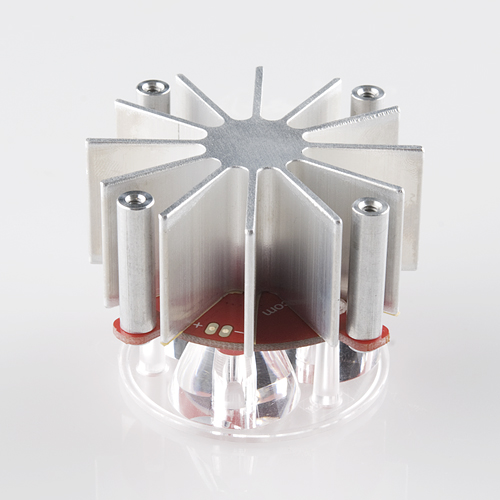 Add the second set of standoffs to move the driver board above the heatsink. These simply screw onto the ends of the standoffs. The purpose of this is to give room between the driver board and the heatsink to prevent shorting and to add some ventilation in case things get too hot. This is optional. You could end up using nylon spacers or insulation material to achieve the same goal.

At this point it might be wise to solder some headers or wires into the driver board. Once you attach it to the assembly, it will be much harder to add them. 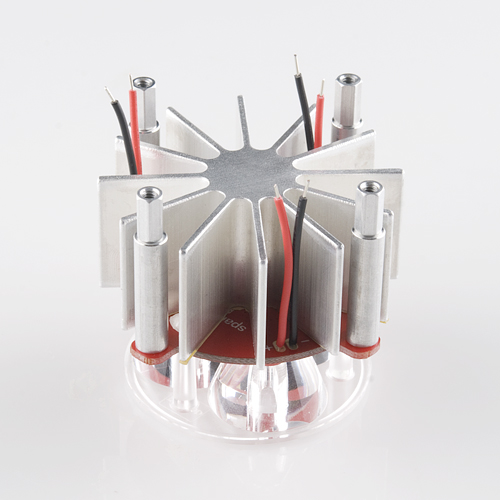 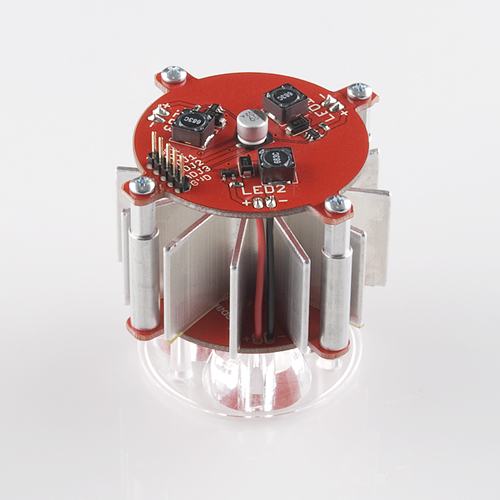 The driver board allows you to control each LED individually, fading, turning off, or setting them to max (650mA). This is done with three adjust pins. They are labeled ADJ1, ADJ2, and ADJ3 to control LED1, LED2, and LED3 respectively. With the pin left open, the driver will supply 650mA of current to its respective LED. When grounded, the driver will turn off that LED. However, these pins can also be used to adjust the amount of current within that range using a microcontroller.

We have included some sample code to get you started. Unfortunately, the driver board does not play well with Arduino's PWM function, so we have to do things a bit differently.  In the sample code, it simply fades in and out the colors using delays in place of the PWM function. Do not pull the adjust pins high unless you want to drive the LEDs at greater than 650mA. The adjust pin on a ZXLD1360 driver chip causes the current to be off when it's held low, and on when it's open (or hi Z). Driving the pin at a DC level will cause the current regulation to be something other than the 650mA that the open adjust pin will regulate to, possibly much higher. Tread lightly if you don't know what you're doing.

You can modify the code to fade in and out the individual LED's to create color blending, a strobe effect, or whatever else you might need.

Good luck with your new Luxeon assembly! Just be sure to keep it away from your eyes, these things are bright! Enjoy. 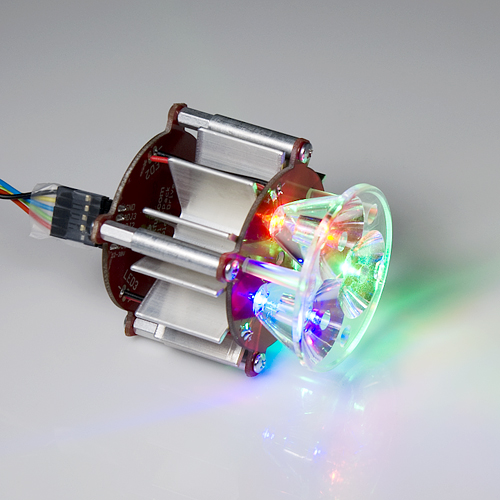