The Port-O-Rotary has a certain degree of stand-alone sweetness.  It harkens back to an era of simplicity, while freakishly juxtaposed with cutting edge tech.  If you ask me, that's a good mix.

The one thing the phone lacks is that classic cardiac arrest twin bell ringer.  Why does it lack this?  Because the original ringer runs on 80VPP!  What now?  Can this be made to work at 3.8V?  I'm happy to say that the answer is "yes".

Words words words, I want to hear it ring! ringer.mp3

So we've got 3.8VDC and we want to make a really big AC signal.  Where do we start?

The first thing is to make the 3.8V into a larger DC voltage.  We do this with a boost converter.  Many flavors of boost converter will work, but we happen to be using the MC34063A from ON Semiconductor.

Once you've got the big DC voltage, you run it through an H-bridge.  The idea here is that you're going to be making two big square waves that run 0 to +V and are 180 degrees out of phase, OK?  It's a push-pull sort of thing.  Now, we could also have done this with 4 transistors, but we have H-bridges on hand to use as motor drivers, so there you go.  Specifically, we're using the TI SN754410.  When referenced to one of the two square waves, you end up with a signal that goes +V to -V.  It's getting bigger...

The last thing we do is to tune the inductor on the ringer with a cap, making a resonant circuit at the ring frequency (which for my testing was 22Hz).  This little trick substantially boosts the current in the inductor, and that equates to more pulling force on that little hammer in there.  Is it loud?  I can't hardly be in the room with it anymore.

Here's the schematic for the prototype:

The values may change as we optimize, but these work pretty well for now.  If it's not completely readable, the parts list is as follows:

The boost converter works by comparing the voltage at pin 5 to an internal reference of 1.25V.  Since there's no current in the line to pin 5 (it's a comparator input, after all), you can back out what the output voltage is by Ohm's Law...60 volts!  Well, ours won't do that, but it does go to about 54V without a load.  That's a lot, man, but it really won't drive much (more on that later).  To help carry the burden, we use some big caps on the output and input to the boost converter.  When the ring sequence starts, C3 starts to drain fast.  By jacking up the value of C4, we make the charge reservoir bigger, so that when C3 starts to go down it'll draw on C4 to take up the slack.  When the ring sequence ends, C3 and C4 charge up again.

If you're not H-bridge savvy, it's pretty simple.  VCC1 drives the logic in the chip, and VCC2 is the voltage that goes out on 1Y and 2Y based on the signals at 1A and 2A.  Each of these signals is a 0 to +V square wave at 22Hz (from a PIC), 180 degrees out of phase with each other.  Nothing to it.

The last thing to note is C2.  That's the tuning cap for the ringer inductor.  Now, there are two coils on the ringer...well, it's a transformer, isn't it?  What do they do with a transformer there?  Beats me, but that presents us with a choice.  For your reference: 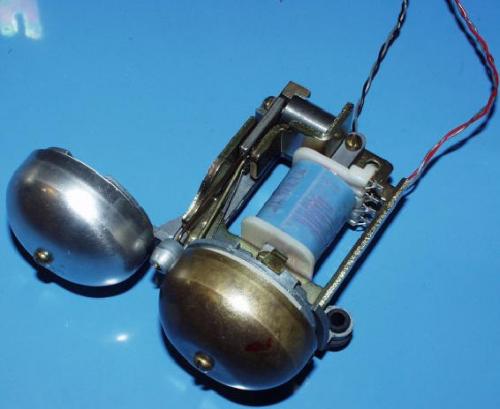 You might be looking at something similar.  They don't come twisted like that, I just checked all the wires with an ohm meter and then twisted up the ones that were related to each other.  One coil measures about 990 ohms, the other measures something over 2K.  I went for the 990 because I wanted more current to drive the hammer.  I didn't have any kind of fancy inductance meter or impedance analyzer, so I ballparked the inductance by making a signal generator with my PIC and splitting the voltage over the coil and a resistor.  When you can measure the same signal level across the resistor and the coil, you know that the inductive reactance equals the resistance.  Then you can back out the inductance from

It's quick and dirty, but it got me within an order of magnitude.  And as you might guess, it's not a small number (around 4H calculated).  Once you get the ballpark value, you manually tune the circuit with various cap values until it resonates.  This is done with an O-scope measuring from the point between the cap and coil to ground and changing the cap value until you maximize the voltage seen across the coil.  Well, it's a bit more complicated than that.  The signal you'll see there when it's resonating is mostly a sine wave, but it has a discontinuity when the H-bridge switches.  In simple terms, it sort of looks like a sine wave with a "shark fin" riding on top of it, like so: 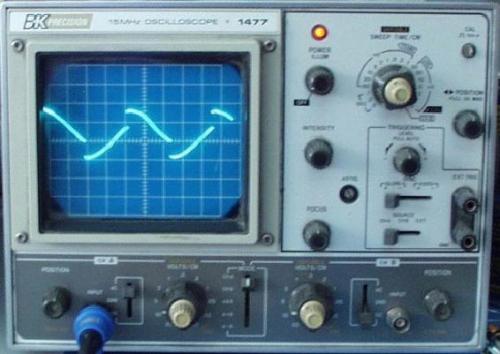 When the resonant frequency of the tank circuit is the same as the switching frequency, that shark fin will be right on the peak of the sine wave.  Mine's a little off as you can see, but it'll do just fine.  And it'll be a big signal.  Remember that we start with a signal from the H-bridge that's about 108VPP (which ideally would be enough to get the job done, but the boost converter by itself can't drive it - more on that coming up).  At resonance, I think I measured something like 180VPP+ at the beginning of the ring.  The signal pictured is a bit past the start of the ring cycle and looks to be about 130 to 140VPP at 50 volts per division on the scope.

Once you get it tuned up, you can figure out what the actual inductance is by

In my two cases (I had two ringers), that came out to be about 15.9H.  At 22Hz, they tuned up nicely with a 3.3uF cap.  I don't think anybody will actually have to go through my method to make this work.  Just use a 3.3uF cap and the 990 ohm coil and see how it goes.  You may have to play with the spring pre-load on the ringer a bit to optimize it.  You decide.

So here's the thing: when you series tune a resonant tank circuit, the reactances cancel and you end up with the DC resistance of the coil as the whole load, which in our case is about 1K.  What does that mean?  Well, where the boost converter is concerned it means 1K across around 50V, and that's 50mA.  In a perfect world, power out equals power in (efficiency=1).  We're not even in the same time zone as that place.  Even if efficiency were 1, we'd have to draw half an amp at 5V to source 50mA at 50V.  As it is, our efficiency is probably WAY off that because we're operating the boost regulator at the far end of it's working spectrum (it can't even make the 60V we're asking for).  So it's anybody's guess as to what it's got to draw to make it work (one of my measurements showed a draw of 270mA, but that will vary with time).  That's why the caps on the converter are as big as they are.  In spite of their size, however, the converter output voltage is seen to drop from 54V to about 41V during a ring cycle.  That's OK, though, because once that little hammer is moving it doesn't take as much to keep it moving. 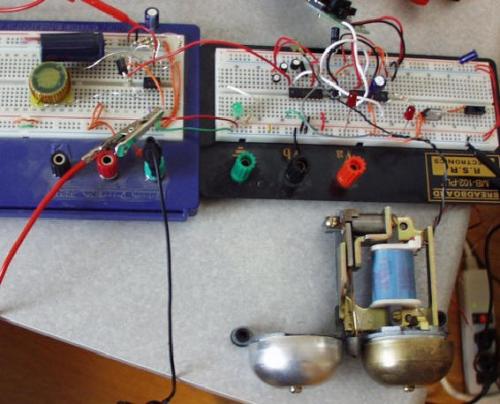 Initial breadboarding to see if this had a hope of working.  The boost converter is on the far left (the little chip with the huge inductor).  Lots of bare wires in there.  Hopefully anyone trying this will be cleaner about it that I was. 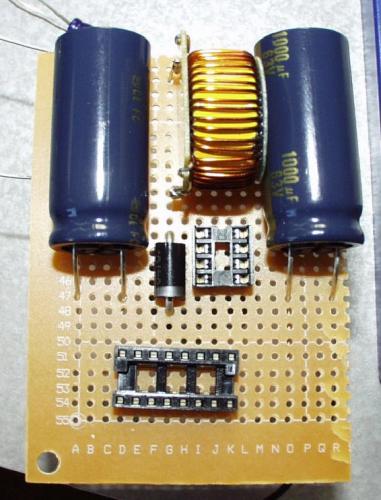 Initial attempt at a prototype layout.  There's not a lot of room inside that bakelite case, but there's enough for this. 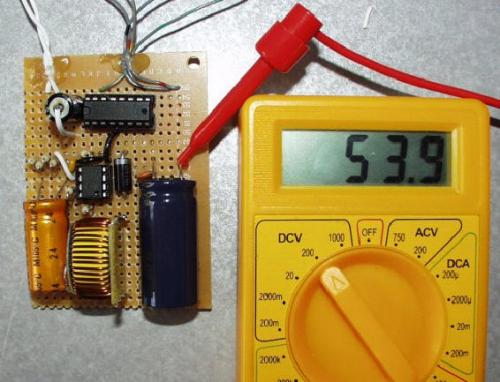 The finished product, powered up and showing 53.9V with no load.  The large parts are hot-glued down to the perf board, as are the outgoing leads to provide some strain relief.

In the end, I'm surprised that it works as well as it does.  Ultimately, the boost converter will have to be disabled when there's no ring to perform because it's a power hog and not well suited to run off a battery for any length of time.  An overly industrious person might also try wiring up the two ringer coils in parallel and in phase to get even more noise out of the thing, but I think it's annoying enough as it is.

As usual, let us know what you think.