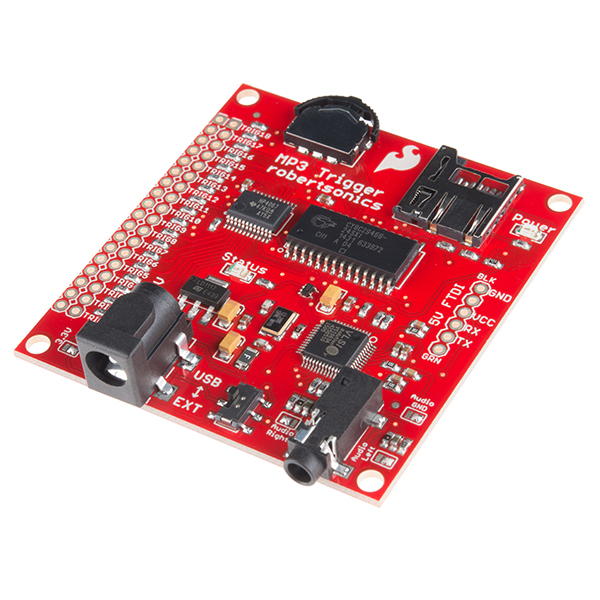 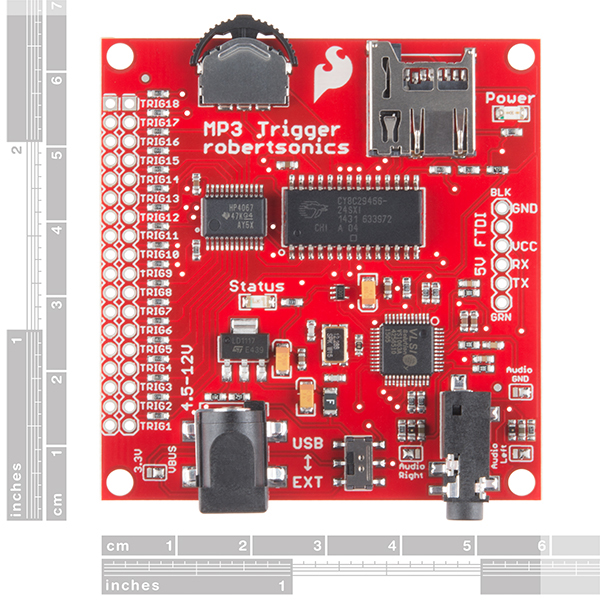 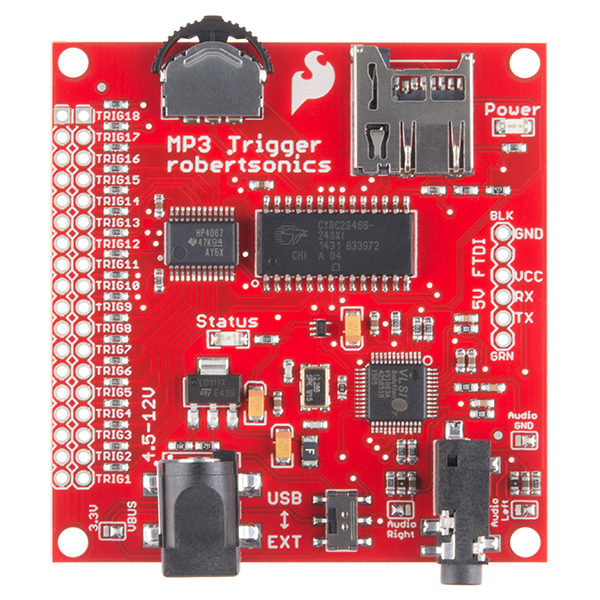 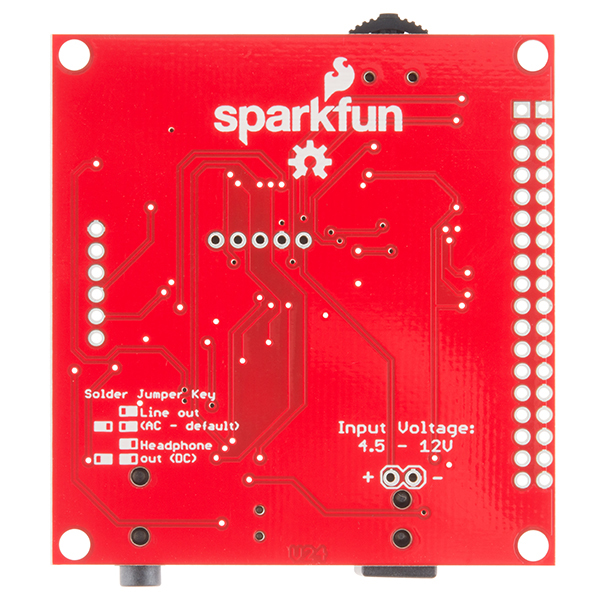 Make some noise with your next project! The MP3 Trigger board is built to make MP3 sound integration easier than ever. The board has 18 external trigger pins that will directly trigger pre-selected MP3 tracks, and a full-duplex serial control port that provides full transport control, remote triggering for up to 256 tracks, and fast real-time volume control. MP3s are stored on FAT16 formatted SDSC or FAT32 formatted SDHC micro-SD flash memory cards. In addition, optimized code can achieve 192Kbps stereo playback from a wider range of cards.

The heart of the MP3 Trigger board is the Cypress PSoC CY8C29466-24SXI microcontroller which serves up MP3 data to a VLSI VS1063 audio codec IC. This version also supports an optional initialization file that can be used to set the serial port baud rate as well as to reprogram any of the 18 trigger inputs to alternate functions, including random and sequential track selection, transport controls and even volume up/down. Each conventional trigger can be set to either allow immediate restarts, or to lock out restarts if audio is playing. Also, a new trigger filename convention provides greater flexibility in naming your MP3 tracks and makes file management easier.

There is also a “Quiet Mode” feature that can be enabled via the serial control port. In this mode, the trigger inputs don’t start tracks directly, but instead produce a serial message indicating which triggers were activated. A host microcontroller can thus monitor the trigger inputs and then start any track or sequence of tracks via the serial control port, making the triggers much more flexible.

This version of the MP3 Trigger includes firmware that supports the use of an initialization file on the microSD card that can be used to change the serial baud rate, as well as to repurpose any of the 18 trigger inputs to alternate functions, such as random and sequential triggers, navigation controls and even volume controls. In addition, a restart lockout option can be used to prevent any trigger from starting a track if audio is already playing. Using these features, custom applications can often be implemented without the use of a separate microcontroller.

Note: This product is a collaboration with Robertsonics. A portion of each sales goes back to them for product support and continued development.

Get Started with the MP3 Trigger Guide!

How to Sell Your Widget on SparkFun

Have an awesome electronic widget that you want to get to market? We can help resell, or maybe even manufacture it! Find out how.
Favorited Favorite 6

Incorporate sound into your next project easily with the MP3 Trigger.
Favorited Favorite 5

We have a handy set of tracks for testing a MP3 Trigger. Each track is a spoken word that says the name of that trigger. Trigger 1 says "One" 2 says "Two" etc... available here on request. Unzip these to a freshly formatted SD card and you're in business.

For anyone that has the older version without the line out jumpers, this ground loop isolator should protect their board.

about 5 years ago by Member #138654 verified purchaser

This board is way overkill for my project, BUT it works. I have wasted a lot of time with the cute little jobs for $5. They are unpredictable and unreliable. The MP3 Trigger does the job. One caveat - if you are waiting for an available character on the RX line for the end of the file - be sure to empty the buffer first. The extra characters that are sent in the "quiet" mode are there, too.

about 6 years ago by Member #547908 verified purchaser

This is super easy to configure, although you need to solder a jumper if you want it to play all files automatically. Perfect for situations where you need to play audio files automatically on power-up, or trigger different sounds depending on which input is grounded. A bit more detail in the users guide would have been appreciated as I found the parts about automatically triggering all sounds confusing, and the setup information in general was confusing. However the tech support provided by Sparkfun was over the top: both fast and very helpful. I bought seven and am very happy with them. Note: if your board seems to be dead when you power it up, you probably have the voltage input switch set the wrong way.

about 6 years ago by Member #485780 verified purchaser

Couldn't be happier with this product such an easy board for starters. The only complaint I have is that its $50. But I guess if I came out with a great product like this I'd charge that too.

One cool little board

about 5 years ago by Member #762697 verified purchaser

This is an amazing device that allows you to add sounds and full music scores to your project. The build quality of the board is excellent and the designers pre-thought it out well with even individual solder points in many cases in addition the the receptacles on the board. (ie: Left and right solder points for audio in addition to the 3.5 mm stereo jack!)

about 5 years ago by Member #909401 verified purchaser

I needed it for a project to trigger more then 4 pir sensors And to trigger the sound corresponding to that channel.

about 5 years ago by Peaster111 verified purchaser

Makes for an excellent Doorbell system. I wired the doorbell switch's (no lights) to the triggers and the audio output to an audio amp which feeds my speakers. Works fantastic. I can have different sounds for each doorbell and can easily change them anytime I want.

You Are The Best

about 4 years ago by Member #121473 verified purchaser

Sparkfun, Your boards and other innovative products are the best. I have centered a number of fun projects around your products. Please keep stocking/developing these wonderful and easy to use modules. And thanks for all the support documentation. Dave Goodsell Contributing Editor, N&V

about 4 years ago by Member #341869 verified purchaser

about 4 years ago by Member #756136 verified purchaser

This unit has never failed me. I use this board to create sounds for products I make and sell all over the world. It is a reliable and dependable. They ship fast too.

about 4 years ago by Member #422752 verified purchaser

It do exactly what it's supposed to do.

about 4 years ago by Member #422752 verified purchaser

It do exactly what it's supposed to do.

about 2 years ago by Member #36903 verified purchaser

I have purchased over 30 of these units for various art and music projects. Many of them were installed in what we call, in the Theater Organ field, a Digital Toy Counter. (See Cinnamon Hill Art on Youtube). Others were used in specialized door bells. All of them worked flawlessly. But I did have two problems: 1: the SD memory header connector is too delicate. My present project, The Trump Circus Machine, I had, in my software development, to insert and remove the memory card several times. At about the tenth time the card would not lock in. It developed a fault. I was able to get around the fault by making a strap, held by the two mounting screws, which held the card in place. 2: I needed to get the STATUS info about the number of tracks on a chip. I wasted several days of programming time trying to figure out how that data was presented and in what mode.The manual is not entirely clear on that. I finally found ou,t through experimentation, that the data was presented in ASCII, Tens first, Units second. It would have been nice to see that info in the operation manual. Then I had to convert the ASCII data into a decimal number so that I could use that info in my software. Quite the challenge! And, oh, I almost forgot: I wanted to use only one power supply so I had to isolate the audio output using audio transformers so that the amplifier could use a common ground. Otherwise a great product. Andy LaTorre Cinnamon Hill Art

The package came in a mangled box, my hopes were dashed as I'd been waiting on the board. I opened the box expecting to see a broken board but thanks to the good packaging it survived. It has been tested and works. Thank you Sparkfun

about a year ago by Member #1670069 verified purchaser

I bought several sensors for a project my family is working on and everything we bought worked great. Until we got to the end of the project. The very last thing we wanted was to add some sounds and we thought we had found the answer with the MP3 Trigger. However, no matter what we tried the sound produced is garbled and sounds like it is playing at less then full speed. We tried using external power supplies from 4.5V to 12V with both external speakers and headphones. We tried the FTDI at both 5V and 3.3V to no avail, the sound was still slow and sounded like garbage. We tried different SD cards and mp3 files, nothing helped. It is so disappointing to reach the very end of a project only to have the most expensive thing you bought for it not to work. My children were crushed, and we are all actively searching for a different solution to add sounds to our project. We were so satisfied with everything else we purchased from SparkFun. Our items were packed very professionally, which is a rarity these days. I wish I were writing a raving review for the MP3 Trigger, but I cannot recommend it under any circumstances.

Extremely Easy to Use

about 6 years ago by IMFoolishTim verified purchaser

I am using this with my Arduino. I was going to use one of the triggers to activate a sound file for a Halloween Prop controller I'm building. The serial control was so easy to set up and use, the code minor in nature. I use the Software Serial example so it frees up the USB to upload revisions to the sketches. I find the MP3 Trigger easier to use than the MP3 Shields I've used in the past. I highly recommend this item. It's easy to use, compact and versatile.