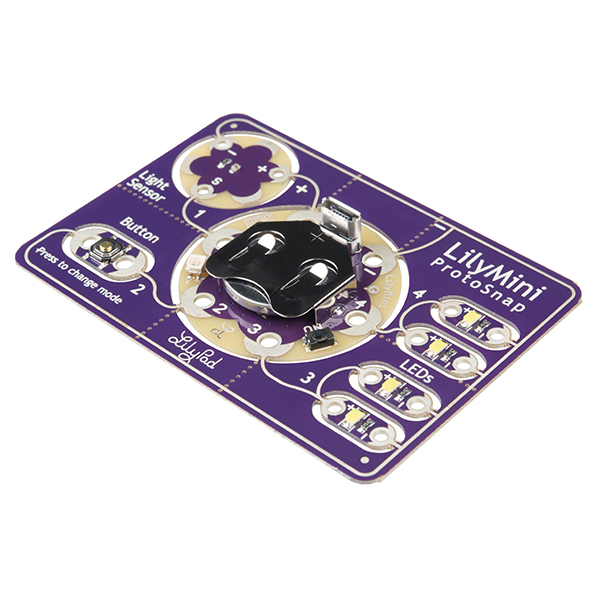 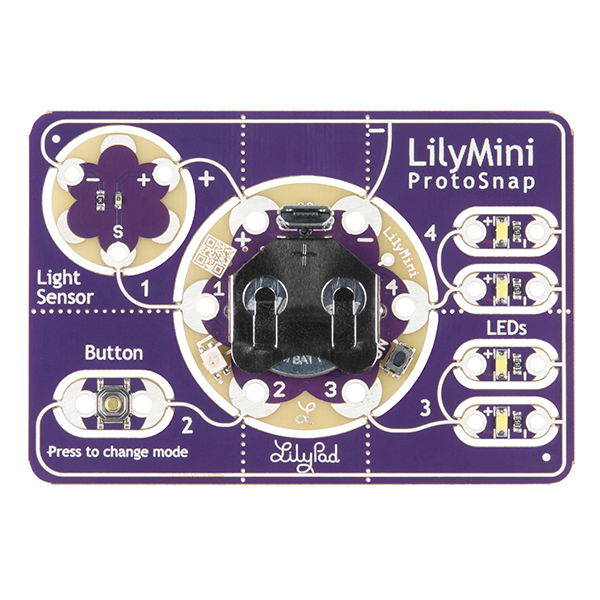 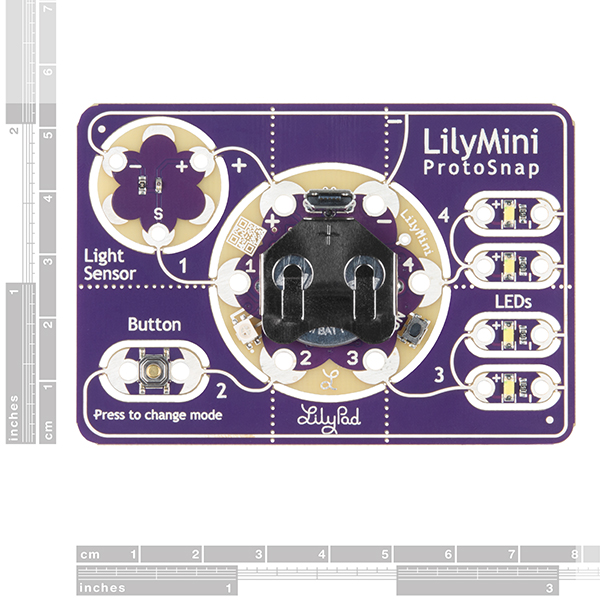 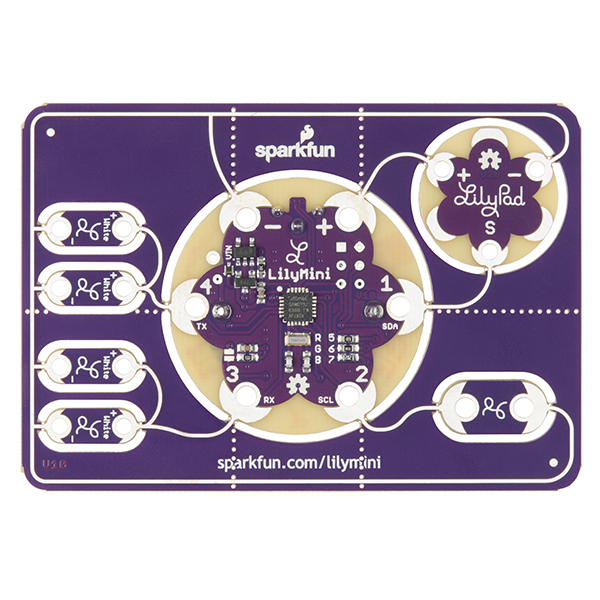 The LilyMini ProtoSnap is a great way to get started learning about creating interactive e-textile circuits before you start sewing. Like other LilyPad ProtoSnap boards, the LilyMini ProtoSnap has all of its pieces wired together out of the box, enabling you to test the circuit’s function before you sew. At the center of the board is a pre-programmed LilyMini microcontroller connected to a LilyPad Light Sensor, LilyPad Button and two pairs of LilyPad LEDs.

The LilyMini ProtoSnap ships with pre-loaded code that uses all the LilyPad pieces connected to it. This sample code has three modes, which can be selected by pressing the LilyPad Button on the bottom-left side of the ProtoSnap. The built-in RGB LED on the LilyMini will change color to indicate which mode has been selected:

The LilyMini board, at the center of the ProtoSnap, has a built-in battery holder for a CR2032 battery (included). On the opposite side of the LilyMini you will find the SAMD11 brain, which controls the ProtoSnap.

Note: A portion of this sale is given back to Dr. Leah Buechley for continued development and education in e-textiles.

Note: The LilyPad LilyMini ProtoSnap does NOT include sewing needles or conductive thread. These items will need to purchased separately.

Warning: You cannot reprogram this product and any attempt at programming is at your own risk!
Get Started with the LilyMini ProtoSnap Guide

Explore the LilyPad LilyMini ProtoSnap and learn how to use it.
Favorited Favorite 6

Use the pre-programmed LilyMini ProtoSnap to make an interactive pennant that reacts to ambient light levels.
Favorited Favorite 5

Getting Started with LilyPad

How to hook up the LilyPad Light Sensor as well as some project ideas and example code.
Favorited Favorite 3

about 5 years ago by Member #528248 verified purchaser

Given that the other Lilypads have Arduino IDE support, and given that no where in the product description does it say the LiliMini does not, and given that it has a USB port (that's a lot of givens), it is reasonable to assume that you can reprogram this board. You cannot. At least not easily, and only by soldering a connector on for an external programmer. Five months later and still nothing. The blinking LEDs are only entertaining for so long.

Sorry to hear about the issues with the Lilypad mini. We're still working on getting the arduino definitions and programming method setup on the new SAMD11 board that's on the Lily mini - it's a little different from the traditional lilypads AVR chip. We hope to have them up as quickly as possible.

I apologize for any frustration that working with the board before the Arduino USB programming capabilities are finished.

Great for teaching kids about circuits

about 5 years ago by Member #637926 verified purchaser

I ordered several of these for our Maker group - It's great for the kids to play with the functions before the incorporate them into a project. It really helps them understand how everything will need to be connected.

So much fun to use for costumes!

I bought 3 of these for a costume and they make the wiring so easy to plan out and use with conductive thread. Turned out fantastic, will definitely recommend these!!