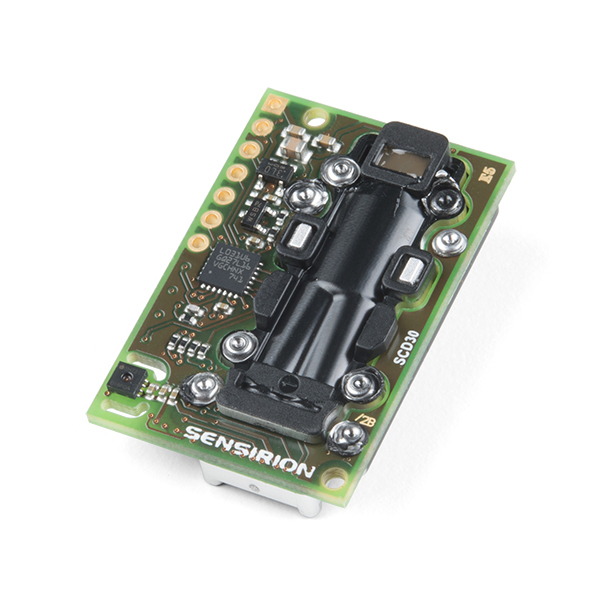 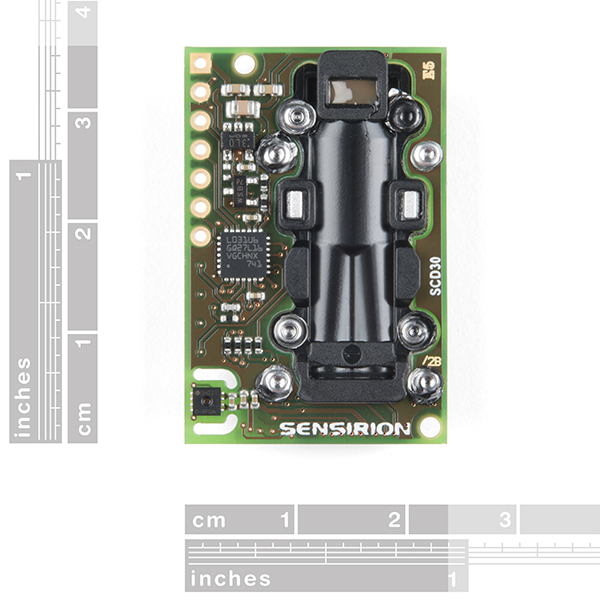 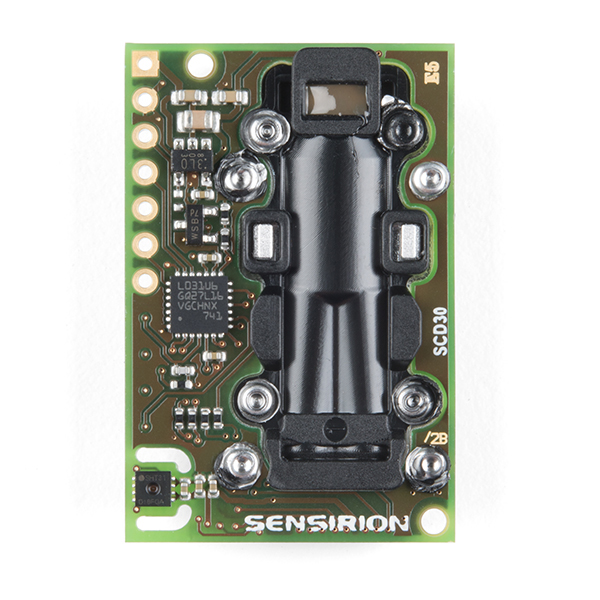 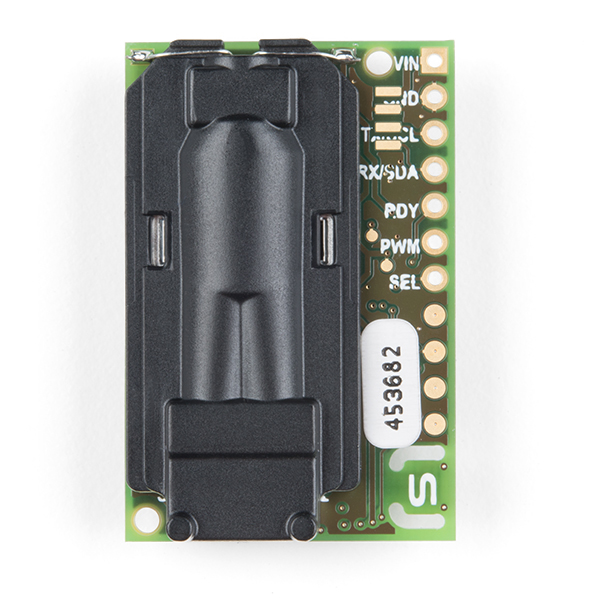 The SCD30 from Sensirion is a high quality Nondispersive Infrared (NDIR) based CO₂ sensor capable of detecting 400 to 10000ppm with an accuracy of ±(30ppm+3%). In order to improve accuracy the SCD30 has temperature and humidity sensing built-in, as well as commands to set the current altitude. For additional accuracy the SCD30 also accepts ambient pressure readings!

We've written an Arduino library to make reading the CO₂, humidity, and temperature very easy. It can be downloaded through the Arduino Library manager: search for 'SparkFun SCD30' or it can be found in the Documents tab above.

about 3 years ago by schizobovine verified purchaser

Only sensor I've tried that gives remotely reasonable readings. Most other sensors need some kind of calibration (usually using "fresh air" as a proxy for 400ppm CO2) and even then they're bouncing around all over the place [0].

Downsides: Library compatibility is mostly Arduino-centric; originally was planning on using a Raspberry Pi but between drivers for other sensors and the clock stretching shenanigans the SCD30 pulls, using an Arduino dumping data over UART to the Pi wound up being easier. Also had to downclock i2c on the Arduino pretty heavily to get it all to play nicely over a qwiic bus (but it did work somewhat reliably then, plus or minus some resetting the Arduino when it gets locked up for reasons I'm not clear on).

One last unexpected upside: much smaller than I was expecting! Which means I might actually be able to fit it in a portable sensing platform, esp since it has on board humidity sensing. (Would be near perfect if it included a barometer!)

about 3 years ago by Member #640078 verified purchaser

I played around with several eCO2 sensors which require calibration and other things, and eventually came upon this sensor which gives true CO2 concentration numbers. It is reasonably accurate, and outputs the values directly over i2c unlike many other sensors. I had good luck interfacing with this sensor using i2c on the Raspberry Pi and Arduino. It also handles temperaure/humidity compensation etc internally which makes it much easier to use than many other sensors. The output data looks really nice and I was able to determine that my college dorm room was exceeding 2000ppm co2 regularly.

This is the best OEM sensor you can readily buy

Accuracy is better than stated. I would say this is +- 5ppm if you have a source of calibrated CO2 to use as a reference. Some tips:

I have roughly 20 of these running in a research setting. They're great.

Easy to use CO2 sensor

I wrote some Python code to use this with a Beaglebone (because I knew the beaglebone hardware supported I2C clock stretching). It was a very enjoyable experience because the Sensirion documentation covered the interface very well, above and beyond what I've ever seen before. Maybe it mentioned it somewhere but I would add that the returned CO2 values are encoded as a 32-bit float. The sensor seems quite responsive, I could open a window, and see the CO2 ppm levels change as the room ventilated. I didn't go thru all the details for the calibration process; I was getting about 530ppm for outside air, when I expected something like 405 ppm.

about 3 years ago by Member #414450 verified purchaser

Used sparkfun's available software and QWIC Red Board which was a great help in getting this device up and running. It would be helpful to have a pins added version. For my application needing to expose the sensor to 1 hour of fresh air each 24 hour period was a problem. If you are using this to sample and store continuous reading inside a closed area, then taking it out to provide "fresh" air can be a problem. 7 day calibration worked perfectly. Used two built up sensors two compare outputs which after calibration was within stated accuracy between the two sensors. I did not have a alternate calibration source to test the sensor against which would have helped.

about a year ago by Fenichel verified purchaser

I had an Adafruit SCD40 CO2 sensor, and I wanted another, but they were out of stock, so I got an SCD30 from SparkFun. The two sensors are similar, but the SCD30 has a broader range. The firmware is different enough that they need separate drivers. I have no access to calibrating gas, so I ran the two side by side to calibrate them. Temperature compensation corrects for internal heating; they differed by about 0.5 °C.
I expected them then to give similar readings for CO2 ppm, but they didn't. They moved in parallel with changes, but the SCD30 was consistently reporting levels that were about 130% of those reported by the SCD40. Because Sensirion says that the SCD30 is more accurate, I was tempted to force-calibrate the SCD40 to agree with the SCD30. On the other hand, the values shown by the SCD30 were implausibly high, so I ended up force-calibrating the SCD30 to agree with the SCD40. After power-on, the first few temperature and CO2 readings from the SCD30 are consistently too high, as if it were only slowly waking up to its calibration settings. It is easy enough to take account of this in the driver.

Niche solution for those niche applications

about 2 years ago by AndreBroekman verified purchaser

All things considered, this really is a marvel to observe in action. The sensor is sensitive to the slightest of environmental changes. The small size opens new avenues notably for biological applications. Note that the accuracy of the devices is all over the place. Four of the sensors placed next to one another delivers more than 100% variance; while calibration is always a must, I do question the long-term performance especially if the out-of-the-box values are so different. Provided library works as expected for easy integration for any microcontroller.

Needed some manual calibration on CO2 when compared to my Airthings but overall am very happy. Keep in mind this device throws a little heat it seems so the temp reading runs higher then true environmental temp. ( 3 degrees in open air in my experience)