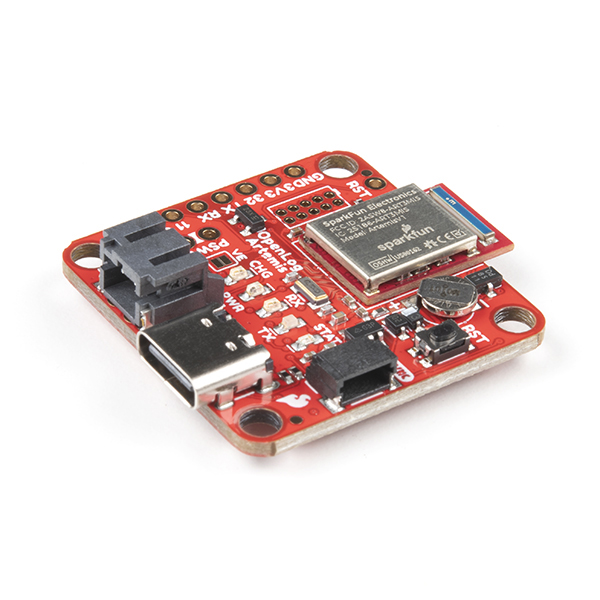 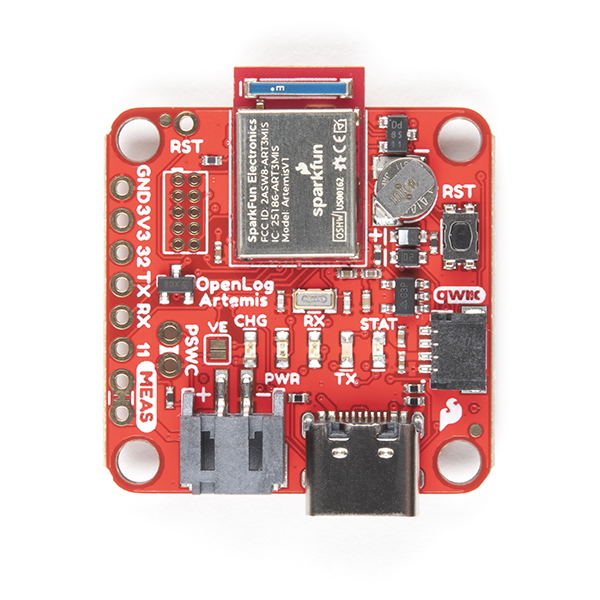 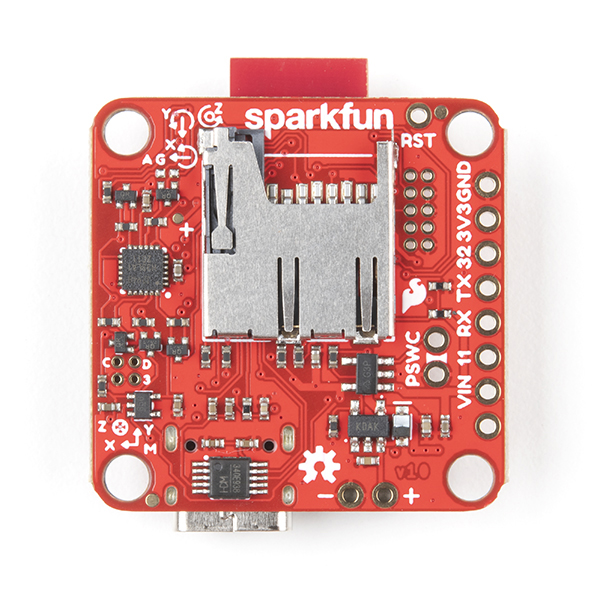 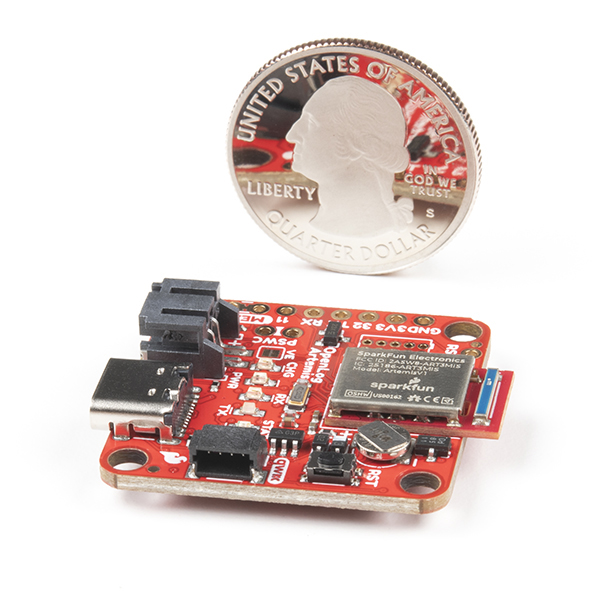 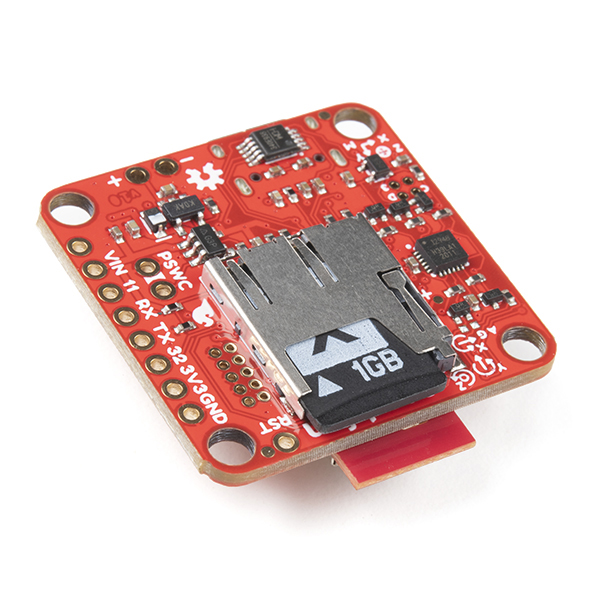 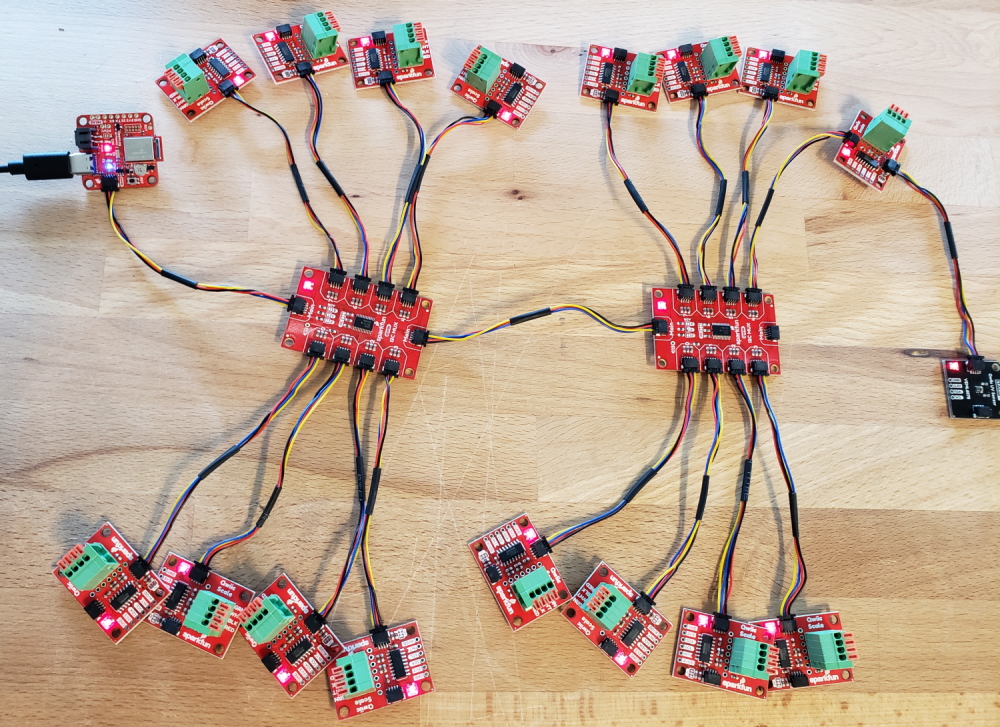 The SparkFun OpenLog Artemis is an open source data logger that comes preprogrammed to automatically log IMU, GPS, serial data, and various pressure, humidity, and distance sensors. All without writing a single line of code! OpenLog Artemis, or "OLA," automatically detects, configures, and logs Qwiic sensors. The OLA is specifically designed for users who just need to capture a lot of data to a CSV and get back to their larger project.

Included on every OpenLog Artemis is an IMU for built-in logging of triple-axis accelerometer, gyro, and magnetometer. Whereas the original 9DOF Razor used the old MPU-9250, the OpenLog Artemis uses the latest ICM-20948 from InvenSense capable of nearly 250Hz logging of all nine axes. Simply power up the OpenLog Artemis and all incoming serial data is automatically recorded to a log file with baud rates up to 500000bps [1], supported! The OLA also has four ADC channels available on the edge of the board. Voltages up to 2V can be logged with 14-bit precision up to 1900Hz for one channel and 1000Hz logging all four channels. Additionally, based on feedback from users we've added an on-board RTC so that all data can be time stamped.

The OpenLog Artemis is highly configurable over an easy to use serial interface. Simply plug in a USB-C cable and open a terminal at 115200bps. The logging output is automatically streamed to both the terminal and the microSD. Pressing any key will open the configuration menu.

The OpenLog Artemis automatically scans, detects, configures, and logs various Qwiic sensors plugged into the board (No soldering! No programming!). Currently, auto-detection is supported on the following Qwiic products:

Very low power logging is supported. OpenLog Artemis can be configured to take readings at 500 times a second, or as slow as 1 reading every 24 hours. You choose! When there is more than 2 seconds between readings OLA will automatically power down itself and the sensors on the bus resulting in a sleep current of approximately 18uA. This means a normal 2Ah battery will enable logging for more than 4,000 days! OpenLog Artemis has built-in LiPo charging set at 450mA/hr.

New features are constantly being added so we’ve released an easy to use firmware upgrade tool. No need to install Arduino or a bunch of libraries, simply open the Artemis Firmware Upload GUI, load the latest OLA firmware, and add features to OpenLog Artemis as they come out!

The OLA can be tailored to many different applications and we will be releasing custom versions of the firmware which can be found on our Documents tab above.

Get Started with the SparkFun OpenLog Artemis Hookup Guide

Drivers don't seem to be liked by Mac security.

about 11 months ago by RocketGuy verified purchaser

I'd love to use this board, but currently I can't get the drivers to load. Mac OS security is blocking it (and yes, I told it to load anyway, but it refuses to listen to me no matter what the hell I do).

Sparkfun support ticket was filed and apparently fell into a black hole.

This could be a fantastic device, but I'll never know since I can't configure it.

about 10 months ago by Medel verified purchaser

It's like they say, easy to configure and even easier to use! Although you cant add other Qwiic sensor but the ones on the list. 3 quick tips to make a 5 star: 1. Using the serial monitor, let the user add their own sensors compatible with the Qwiic ecosystem. 2. If not, at least add some button to the qwiic compatible sensors list. 3. Some user have a 3d printer, why not make available a 3d model of the SF OpenLog Artemis? so we can share our projects.

OK, but could be awesome

i launch big rockets. My last flight was to 3 miles, and I want my next flight to be 5 miles. The OpenLog Artemis does everything that I want and it is so small, except... Logging to an SD card is pointless if the rocket is lost. On the three mile launch I used an APM 2.6 with a radio link to the ground. The rocket was exactly where the last GPS reading said it was. I desperately need the Artemis to output the captured data to the serial out. That way I can down-link the data. This device is sooo close to what I need. Please update the firmware to allow this. I use the down-link data to create Google KML files of the flight. I am pairing the Artemis with the Neo-8MU gps.

about 9 months ago by Member #322428 verified purchaser

Great product suggest adding a feature to set up and transmit serial data via an xbee wireless device. Currently I use the serial port (logger) to send data to a Raspberry Pi. I created a Python script to read the serial data, parse the data into the sensor readings, and transfer to data via xbee to a second Pi acting as an xbee hub. I would like to reduce the size of this configuration, and eliminate the Pi. A new logger firmware feature I believe can do the xbee part? Possible?

about 5 months ago by Zardoz verified purchaser

I was going to make something to log the temperature of the air coming out of my hot air registers. Seeing this product I decided to save my time and energy on other things. The configuration was dead easy. I use the onboard temperature sensor to log the room temperature and added a Qwiic TMP117 sensor to measure the vent temp. I added a Li battery for power and the built in charger makes it all easy to use. One charge and it records for days. Opening the log file with Excel I had temperature graphs in just a minute. Absolutely fantastic. The next thing to do is put it in a case, it's just laying on the floor right now.

about 3 weeks ago by Member #318505 verified purchaser

I'm using this to log accelerometer and barometer data aboard a model rocket, using the qwiic interface (https://github.com/truher/RocketInstrument). Since the sensors weren't supported by the built-in OpenLog thing, I just wrote a little arduino code to shuffle data from qwiic to microsd, and i'm pretty happy with it, just plug in a few cables and it works.

One thing I wish were easier; if there were a "graceful shutdown" switch on board (like the reset switch), then I'd corrupt the sd card less often. One other thing isn't really a limitation of this device, but the Arduino i2c ("Wire") library seems pretty primitive, and i couldn't figure out how to interleave reads from multiple sensors, which limits the sample rate.

Anyway, if you're looking for a microcontroller board with onboard microsd, battery management, usb-c, and i2c, this is just the ticket. :-)