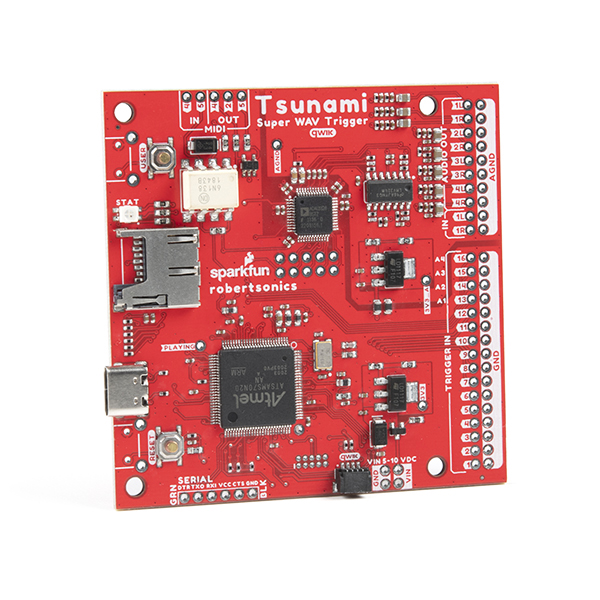 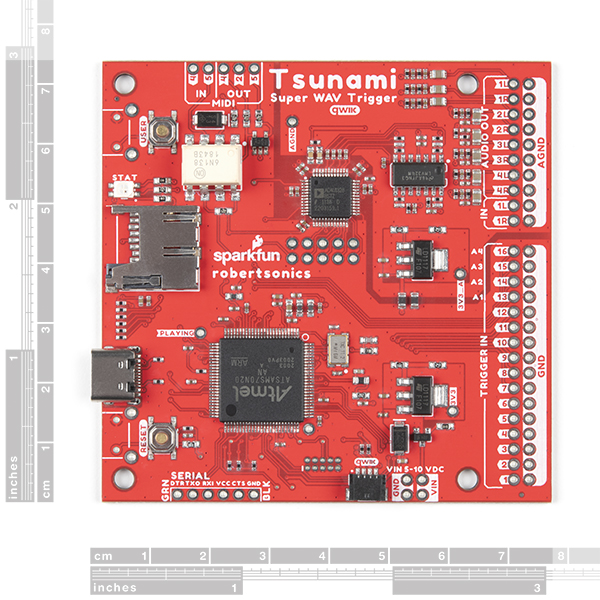 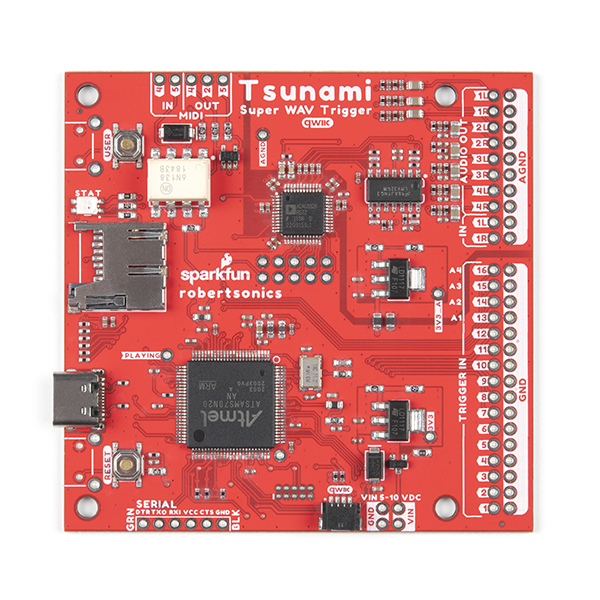 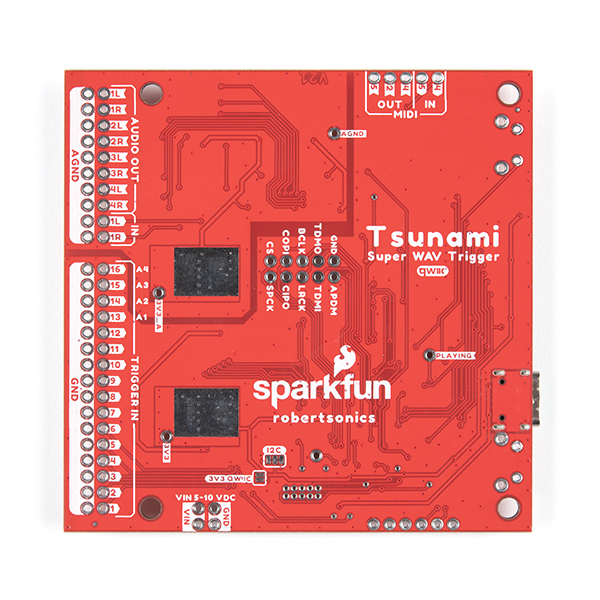 Based on a new generation ARM Cortex M7, the Qwiic Tsunami Super WAV Trigger extends polyphony to 32 mono or 18 stereo simultaneous uncompressed 44.1kHz, 16-bit tracks. Each track can start, pause, resume, loop and stop independently, and can have its own volume setting, allowing you to create the perfect interactive mix of music, dialog and sound effects. The Qwiic Tsunami also supports true seamless looping over an arbitrary track length. Utilizing our handy Qwiic system, no soldering is required to connect it to the rest of your system. However, we still have broken out 0.1"-spaced pins in case you prefer to have full access to each pin.

The big news is that the Tsunami has eight audio output channels, arranged as either eight mono or four stereo pairs. Alternate versions of firmware support either mono and stereo architecture – you choose. The mono version adds a new “Synced Set” trigger function that can start up to eight mono tracks on adjacent outputs. These tracks will start and stay in sample-sync for playing stereo or even 5.1 or 7.1 surround sound content with a single trigger. Any track can be dynamically routed to any output. And each output provides independent real-time volume and sample-rate conversion (pitch bend). For your convenience, the Tsunami also has full Arduino and Python libraries available which can be found in the Documents tab above!

Note: The Tsunami Super WAV Trigger will only work properly if your µSD card is formatted with the correct file allocation size (32Kb). If this is set incorrectly during formatting, then the Tsunami will show very erratic behavior and occasionally crash.

Get Started with the Qwiic Tsunami Super WAV Trigger Guide

This guide will get users started with the Qwiic Tsunami. We'll start by putting *.wav files and a configuration file on a microSD card, pop it into the Qwiic Tsunami, then trigger sounds across multiple outputs.
Favorited Favorite 2

Too advanced for me

about a year ago by Member #1705310 verified purchaser

I was told it works great however it was too advance for me. I had to send to a friend to solder and add pins to help get it more set up for me. Can’t wait to get it back in the mail and set up with a power supply and a wireless remote that I am getting instructed on how to do my friend as well.

Too advanced for me

about a year ago by Member #1705310 verified purchaser

I was told it works great however it was too advance for me. I had to send to a friend to solder and add pins to help get it more set up for me. Can’t wait to get it back in the mail and set up with a power supply and a wireless remote that I am getting instructed on how to do my friend as well.