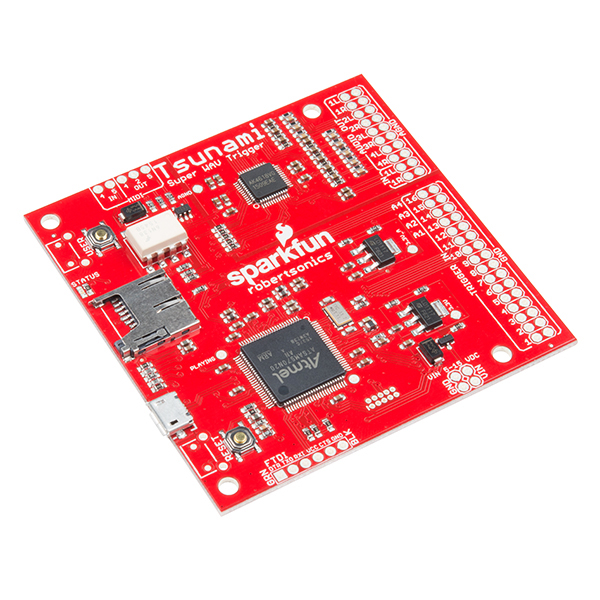 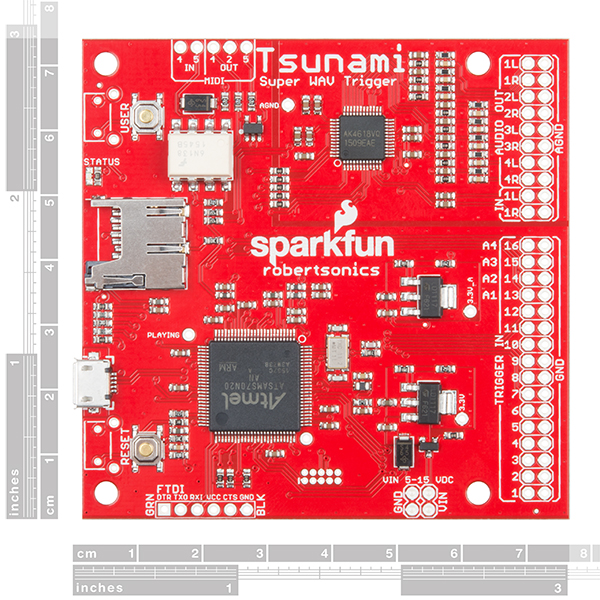 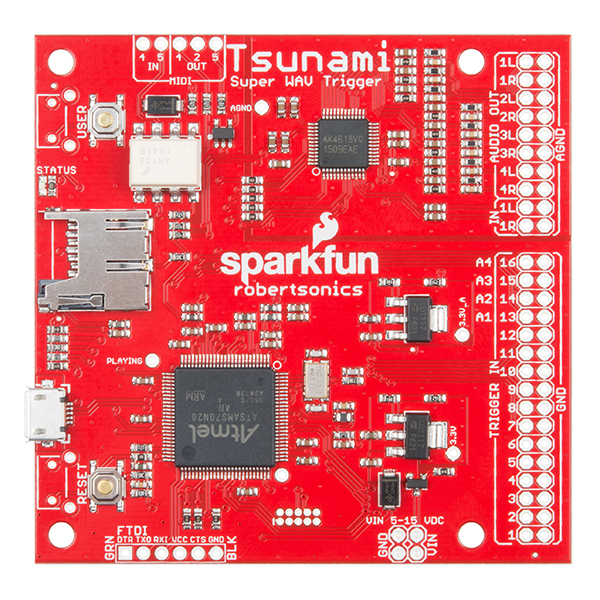 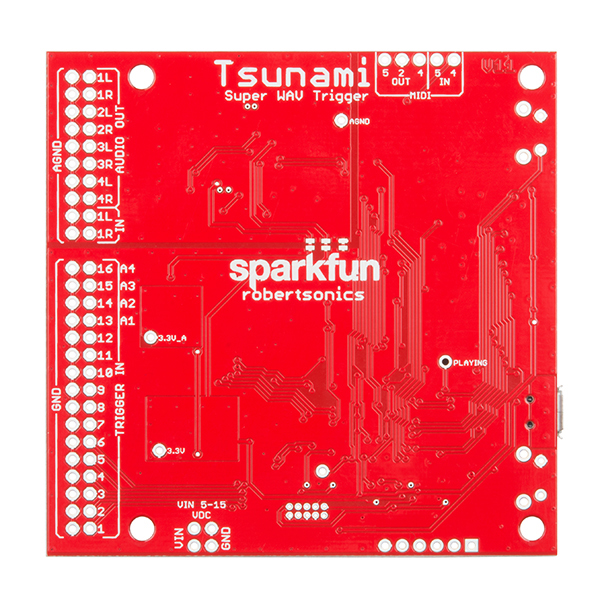 The Tsunami Super WAV Trigger is the next evolutionary step beyond the original WAV Trigger.

Based on a new generation ARM Cortex M7, the Tsunami extends polyphony to 32 mono or 18 stereo simultaneous uncompressed 44.1kHz, 16-bit tracks. Each track can start, pause, resume, loop and stop independently, and can have its own volume setting, allowing you to create the perfect interactive mix of music, dialog and sound effects. The Tsunami also supports true seamless looping over an arbitrary track length.

The big news is that the Tsunami has 8 audio output channels, arranged as either 8 mono or 4 stereo pairs. Alternate versions of firmware support either mono and stereo architecture – you choose. The mono version adds a new “Synced Set” trigger function that can start up to 8 mono tracks on adjacent outputs. These tracks will start and stay in sample-sync for playing stereo or even 5.1 or 7.1 surround sound content with a single trigger. Any track can be dynamically routed to any output. And each output provides independent real-time volume and sample-rate conversion (pitch bend). For your convenience, the Tsunami also has full Arduino and Python libraries available which can be found in the Documents tab above!

Note: The Tsunami Super WAV Trigger will only work properly if your uSD card is formatted with the correct file allocation size (32Kb). If this is set incorrectly during formatting, then the Tsunami will show very erratic behavior and occasionally crash.

Note: The Tsunami was developed in collaboration with Robertsonics. A portion of each sale goes back to them for product support and continued development.

Get Started with the Tsunami Guide

Recommended power source is a micro USB cable, but we do provide pads for your own power source. They are labeled 5-15 volts, but anything more that 7 volts on those pads results in the voltage regulators producing a lot of heat. (12 volts is alarmingly hot)

We recommend powering the board with 7 volts or less if you use the VIN pads for power.

If you're experiencing issues with being able to use the volume up and down triggers on any other output other than mono 1, you may have an older version of the firmware. Download the latest firmware version and update to fix this problem.

This board is great, and functions as expected! The people at SparkFun were also very helpful with combining two shipping orders, saving me some money on shipping costs. A++ customer service! My only "issue" is I wish there were a Tsunami option with pins already soldered in, I would've happily paid more for it. It's not impossible to solder, you just need an appropriate soldering iron. I ended up having a friend who owns a stereo repair company solder the pins in for me. Not a big deal, you just need precise equipment.

The board itself and the people at SparkFun rock! Overall great experience! Also, Jamie of RobertSonics was very helpful in assisting me in figuring out any issues I encountered, Jamie thank you thank you!

Just what the doctor ordered!

about 5 years ago by Member #666105 verified purchaser

I am using the Tsunami in a veterinary medical training simulator, using 7 outputs to drive 4 simulated pulse points, a headset for stethoscope simulation, patient voice and gut sounds. All operate independently, synchronized with a graphical patient vitals monitor, The Tsunami responds very consistently, without significant startup latency when sounds are played. Its capacity for a large number of files allows me to have many differing sounds in my library, to provide many different heart/lung conditions and cover a broad range of heart and respiration rates. Even with very short wav files, the sound quality is clean.

The documentation is clearly written and accurate. And Robersonics has been very responsive to me when I have had additional questions come up.

This is perfect Tool and I have a lot of fun with it!

about 5 years ago by Member #225855 verified purchaser

It gives me a great flexibility in playing samples.I have put into a Box with 16 buttons. Please see a short video at https://vimeo.com/245263943

Using it for sound effects and it is doing everything that I need it to do.

I have used this card for a special project in Mexico. The option of having independent audio outputs makes it extremely versatile and powerful. It seems to me a simply brilliant solution.

Could not go without it!

Extremely well designed and programmed. It works beautifully and is so simple to use. I cannot find a weak side to it.

about 4 years ago by Member #719192 verified purchaser

I had one of these sitting around for a while, but one of my students wanted to do an 8-channel surround sound installation so i finally wired it up as a stand-alone player for gallery use. Works like a charm! As is documented, it is particular about the sound file format, but if you're careful in Audacity should have no issues. Liked it so much I bought a second one.

about 3 years ago by Member #781733 verified purchaser

It's good board but first time I've got a dead board from sparkfun. I buy two board's one of these board's work but the second one is dead no signal. I try to use it as sampler in my eurorack . sparkfun still have my trust after this problem.

Buy a tsunami card does not work and I have not been able to contact someone for support. Who can I contact?

Sorry you're having trouble! Please check our technical assistance page for help.

This is an amazing multichannel audio solution!

about 3 years ago by Member #629294 verified purchaser

This is a reliable and incredible product - doing things like looping multichannel audio is super easy with just the board itself, but it's also very powerful when paired with an Arduino for instrument building and interactivity. Highly flexible and easy to program with good documentation and support.

Thanks sparkfun team for sorting out my wav trigger issue, emailed sparkfun support issue was fixed and I have now received my replacement unit. Looking forward to setting up the new tsunami wav trigger.

High Functionality, when you get the formats right.

about 2 years ago by Member #456243 verified purchaser

Lessons learned; When Audacity does an import, it uses the specified format. As default import format was 32bit float, it declared that my 16bit PCM were 32bit float. Not really. Corn Fusing.

Also, I had 60 second mono .wav files that seemed very much like the A440hz sample. Whoops, That sample was 30 second stereo file which played, when mine wouldn't. OK, I reflashed with the Mono firmware, works good now.

Set the .tran parameter for duration of desiredsignal. i.e. .Tran 60 (Rightclick any element or text string to edit it.)

Wonderful for generating specific mono test waveforms!
No need to pass through Audacity. The multiple output of Tsunami is very powerful tool for Controlling things. I bypassed the HiPass filter cap to get DC control lines, albeit with 1.6v offset. BigFun from SparkFun!

ISSUE: the uSD card socket initially had an extra click upon insertion. I ignored it until reinsertion #7, when the card would no longer latch. Using tiny tweezers, I manually depressed the ejection slide inside the socket a few times, allowing it to 'pop' back toward me. A tiny golden square eventually fell out, and then it resumed normal latch function. I lost the tiny square, but it seemed like a fabrication debris artifact.

One other lesson; the FTDI 'real-time' interface doesn't seem to allow me to edit the .ini file? I guess it can issue commands, which wasn't what I needed. Plan on numerous iterations of the files on the uSD card.
Other other lesson; Analog Gnd (AGND) is only tied to the other grounds at JP3. Still happy.