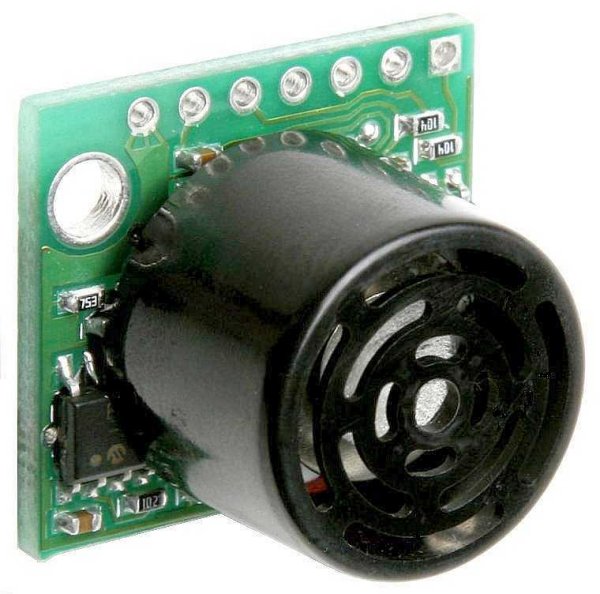 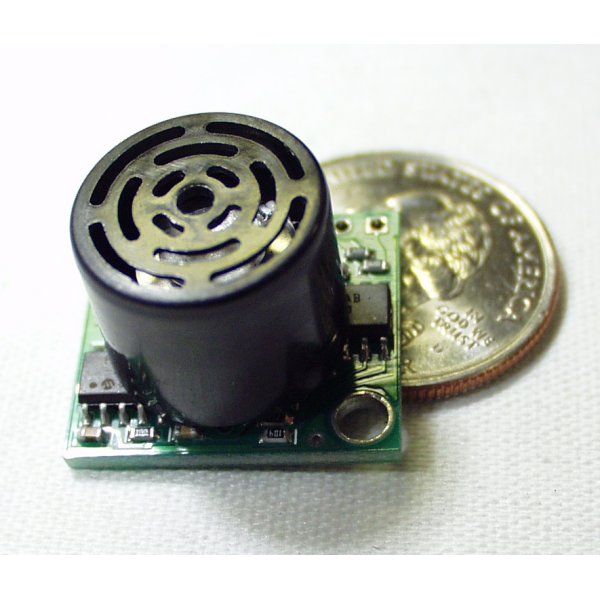 Johnny-Five
2
Only 3 left! 3 items in stock. Sale items are not eligible for quantity discounts.

This is the fantastically easy to use sensor from Maxbotix. We are extremely pleased with the size, quality, and ease of use of this little range finder. The serial interface is a bit odd (it's RS232 instead of standard TTL), but the PWM and Analog interfaces will allow any micro to listen easily enough. The sensor provides very accurate readings of 0 to 255 inches (0 to 6.45m) in 1 inch increments with little or no dead zone!

Control up to 10 sensors with only two pins! Checkout the Maxbotix FAQ listed below.

If the ultrasonic range finder indicates that it has an "RS232 Serial Output" and is outputting an inverting signal with the voltage level based on Vcc, you could just use an inverting circuit using a transistor to invert the signal. This is not a standard RS232 that uses +/-12V. There are a few methods of flipping this signal through hardware or software. The resources and going further will provide specific examples.

Doing a quick test using a retired NPN transistor from our storefront, I was able to get it working based on the circuit using a RedBoard Programmed with Arduino. I was using an Arduino so Vcc in my circuit was 5V. Since it's basically two diodes within the transistor, you will want to use resistors to limit the current. I just used two 330Ohm resistors just like I was turning on an LED. You probably do not need to do this but the values might need to be adjusted when using it at higher speeds or if the transistor is not fully turning ON/OFF. Testing with a multimeter, it worked as expected. An input of 5V would result in 0V (logic LOW) on the output since the transistor was turning on. With an input of 0V, the transistor would not be conducting so the output would be held HIGH at 5V. Using an Arduino serial passthrough for further testing, I was able to view the ultrasonic sensor's output data without any problems.

Otherwise, you could be clever in writing your code to store the value and possibly apply some sort of logical NOT operation. In Arduino, there is a special feature using software serial that inverts the signal by setting a parameter to true [ "Software Serial Constructor" – https://www.arduino.cc/en/Reference/SoftwareSerialConstructor ]. There was someone in the Arduino forums that provided example code to invert the output, parse the data, and output it through the serial monitor here => [ User "Goldthing" - http://forum.arduino.cc/index.php?topic=114808.msg864009#msg864009 ].

There is a tutorial from MaxBotix that shows you how to connect ultrasonic sensors to Raspberry Pis => [ http://www.maxbotix.com/Raspberry-Pi-with-Ultrasonic-Sensors-144/ ]. Certain ultrasonic sensors listed in the article require an inverter. If the ultrasonic range finder's output serial output is " RS232 " like the sensors listed under "Ultrasonic Sensors that Require an Inverter" , this indicates that the signal is basically an inverted output with the voltage level based on Vcc.

Therefore, you would need to follow the tutorial and use a serial inverter in order to use it with the Raspberry Pi. If you are using a Raspberry Pi a transistor, Vcc should be 3.3V since the Pi uses a 3.3V system.

No consistency in readings

about 6 years ago by Member #537415 verified purchaser

This is the worst range finding sensor I've ever worked with. Sitting stationary in my garage it will read 110 inches, then 20 inches, then 40, then 110 with nothing around it moving. It's pointed at a wall and should have no trouble finding the distance. I've tried it both with the analog and pwm output, and they both are equally noisy. There's not enough consistency to it to even do some signal conditioning and get a useful value. I know it's a wide band it detects, but when pointed at a wall 9' away I should be able to get a reading of 9' consistent enough to detect if there's anything between it and the wall when nothing else around it is moving.

This seems very out of character for this product, which has historically been rock solid. I would suggest contacting our tech support team, they should be able to help get this issue resolved for you.

about 2 years ago by dargs verified purchaser

Although I bought one of these 10 years ago, I've only just got around to using it! I found it gave rock solid readings (using analog o/p pin 3, 3v3) much better than a ping))) module or HC04.

Quite a wide detection, ie would detect a door frame from a few metres away instead of thru the doorway.