Retired DEV-13787 RoHS 9
Note: Retired Product
This product has been retired from our catalog and is no longer for sale. This page is made available for those looking for datasheets and the simply curious. 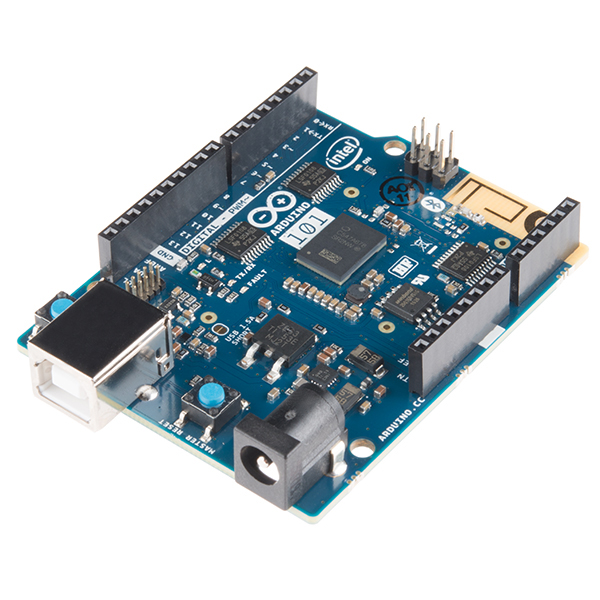 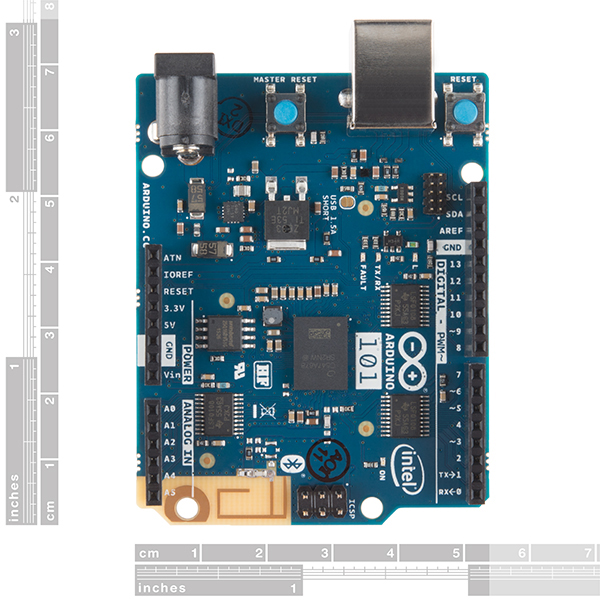 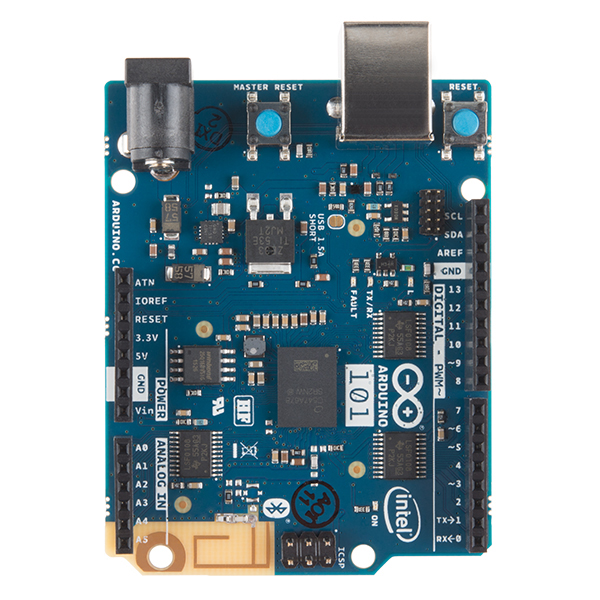 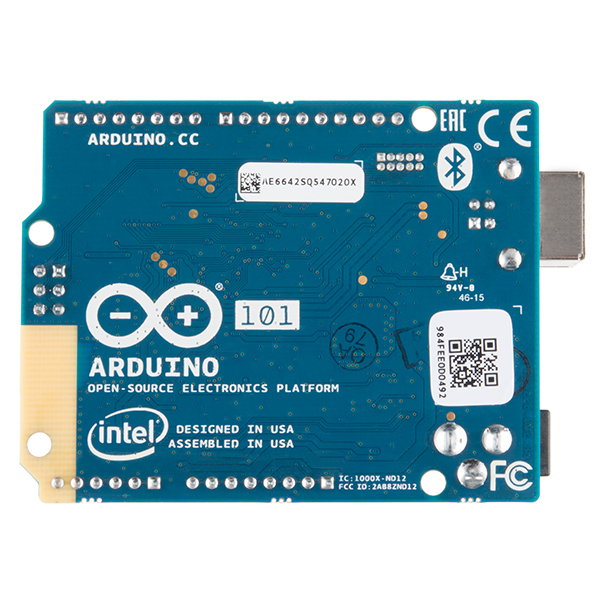 Retired DEV-13787 RoHS
9
Note: Retired Product
This product has been retired from our catalog and is no longer for sale. This page is made available for those looking for datasheets and the simply curious.

The Arduino 101 is a learning and development board that delivers the performance and low-power consumption of the Intel® Curie module with the simplicity of Arduino at an entry-level price. This development platform keeps the same robust form factor and peripheral list of the UNO with the addition of onboard Bluetooth LE capabilities and a 6-axis accelerometer/gyro to help you easily expand your creativity into the connected world.

The Intel® Curie module contains two tiny cores, an x86 (Quark) and a 32-bit ARC architecture core, both clocked at 32MHz. The Intel toolchain compiles your Arduino sketches optimally across both cores to accomplish the most demanding tasks. The Arduino 101 comes with 14 digital input/output pins (of which 4 can be used as PWM outputs), 6 analog inputs, a USB connector for serial communication and sketch upload, a power jack, an ICSP header with SPI signals and I2C dedicated pins. The board operating voltage and I/O is 3.3V but all pins are protected against 5V overvoltage.

Note: The Arduino 101 is now only restricted in Argentina, Brazil, China, Indonesia, Japan, Nepal, South Korea, and Taiwan. If you are in one of the aforementioned countries we apologize. Arduino is currently working on Trademark rulings in those areas. This product may be delayed by two to three business days to verify shipping address. We will contact you after you place your order if we need anything.

Note: The Real-Time Operating Systems (RTOS) and framework developed by Intel is scheduled to be open sourced in March 2016. Until then, it's not possible to interface with it directly; only the Arduino core can do it via static mailboxes.

SIK Experiment Guide for the Arduino 101/Genuino 101 Board

This guide contains all the information you will need to explore the 21 circuits of the SparkFun Inventor's Kit for the Arduino 101/Genuino 101 Board.
Favorited Favorite 6

This is a quick guide to using the Google Science Journal app with the Arduino 101 that's included and pre-programmed in the SIK for Google's Science Journal App.
Favorited Favorite 1

about 7 years ago by DrSpeed verified purchaser

I've done a lot of arduino projects and the '101' seemed really great on paper. After getting my hands on it I realized that it was, at the time (03/2016), not ready for prime time. -There is not much support documentation and only recently has there been and IDE with support built in. -I find that sketches do not run reliably. Specifically sketches that use the new NeoPixel library will sometimes just stall. -Uploading sketches seems to work intermittently and never works (for me) the first time. -You have to wait 5 seconds for your sketch to start (noted on the output of the IDE), considering that the only real debugging on this platform is via Serial, this can me it very frustrating to know if your sketch is working.

At this point you're better off buying a regular Uno or a Teensy and whatever other part you need. Sadly this is the same experience that I had with the Galileo.

Good board to play around with, though some issues that will hopefully be addressed soon.

about 7 years ago by airspoon verified purchaser

All of the soldering seemed fine and this appears to be a solid-built board (unlike the other reviewer noted). I guess he got a [I'm assuming relatively] rare defective board. However, that's not to say that there aren't problems. It would seem that there are some issues with the Arduino IDE (1.6.7) recognizing this board and uploading sketches to it. I installed the curie core, but get compiler warnings and error messages like crazy (like 50 or so lines and sometimes an indefinite hang) when uploading an example sketch to the board. Sometimes, the sketch loads, sometimes it's rejected with errors, and these are simple example sketches. Often times, it takes uploading the sketch over and over again about 10-20 times before the sketch actually loads (though not without errors and warnings in the console), even when the sketch loads and appears to work fine on the board. This is true, even for the simple blink example. Other basic example sketches simply refuse to load at all, or give unpredictable data, such as using the curieIMU examples. I haven't yet used the curieBLE examples, as I literally just got the board in the mail a couple of hours ago. There are clearly some issues with this board working properly with the Arduino IDE and a quick google search would confirm that these problems are systemic. A few solutions and "work-arounds" are offered, which I haven't tried yet, but these "work-arounds" seem to have mixed results, with the majority of people claiming that the various "work-arounds" don't work. I do hope however, that these issues are fixed soon, as the board itself, when it works, seems like a blast -far better than the $6 cheaper UNO, though only if the bugs are worked out. Until then, for beginners at least, I would stick with the Redboard, Arduino Pro or Pro mini (I would advise AGAINST buying the UNO as the purchases don't support the Arduino community and further development of the ecosystem, including software). I guess $30 isn't that big of an investment for a board with cool features but that has a lot of bugs to be worked out. Am I happy with my purchase? That seems like a loaded question. I wouldn't buy another one, that's for sure, at least until the issues are worked out, but I also won't be asking for a refund either or letting it collect dust on my workbench like the PCDuino 2, Udoo Quad and a plethora of other dev boards I bought into over the years. I'm happy I got this board, and plan to have as much fun as I can with it (teaching and learning) with my 8-year old son, and I'm happy this is supporting Arduino.cc. However, and with all of that said, I think a photon for $10 cheaper or the Photon Redboard by Sparkfun is much better investment of your time and money. It has a different feature set, obviously, but the platform is rock solid. So if you are on a tight budget and want a full-featured, rock-solid board, I would go with Particle's Photon, but if, like me, you like exploring new boards and platforms with ever unique features and novel hardware, while having $30 to burn, then it might be worth getting, just expect to encounter problems for the foreseeable future.

about 7 years ago by Member #666600 verified purchaser

I spent the last couple of days trying to figure out why my new Arduino 101 would load sketches perfectly fine from my Macbook but would not load at all from Windows 10!

It turns out that if your user account in Windows 10 has a space in the name ( like "Joe Smiths Account" ) then the Arduino IDE gets lost when it tries to upload a sketch to the Arduino 101 board.

When I created a new user account on my Windows 10 system that did not have any spaced in the name, ( like "JoesSmithsAccount" ) then the Arduino 101 loaded sketches properly, as long as I was logged into the new account.

Hope this is helpful!

about 7 years ago by Member #192959 verified purchaser

I love the new features of the Arduino 101. Integrated 6DOF sensor? Built in, easy to use bluetooth? The promise of a future neural net? But there's a big blemish on the first batch: The quality control is lousy. Out of the box, the headers on my board never lined up. And within a few weeks of using it, the standard digital pins stopped working, leaving me with only the analog pin bank.

I'm sorry to hear this. Please contact us for assistance- https://www.sparkfun.com/technical_assistance

about 7 years ago by Member #680894 verified purchaser

There are issues with the IDe being able to upload code to the board even after installing the core, and the examples claimed to come with the software are only partially included. Good design and features, but it needs fixing.

Better than ESP! Works with my NGT20 too

about 5 years ago by Member #717556 verified purchaser

The ESPs have all kind of wierd issues and and seem to be hard to get working. I haven't used any bluetooth but the board works and isn't a hassle like ESPs.

about 7 years ago by Member #583789 verified purchaser

I was really looking forward to developing an iOS control panel for my Arduino projects when I saw the logo for nRF's Master Control Panel: three sliders for inputs, two gauge readouts for output... I ought to be able to construct a highly customized user interface, right? well, so far, wrong. Where is the development environment for the nRF MCP? Or the nRF Toolkit?

Someone's gotta say it: clicking on an arrow icon, seeing the soft keypad come to life on my iPhone, switching over to the numeric soft keypad, backspacing over the last digit of the previous entry, typing in a 1 or a 0, and then watching the... wait for it... LED on the Arduino 101 to change state, is a buzzkill. I have no problems on the Arduino side, I can get it to do anything I want depending on what was transmitted from the phone. But on the phone side this "system" needs some acceleration. Can Sparkfun link to someplace I can find a development environment?

In the meantime, I just bought a LightBlue Bean. At least those folks realized that it REALLY helps to deliver an ecosystem.

I like the Curie on the 101. I like the 6-axis motion sensors. but nRF needs to realize how much more they can accomplish when they expand their potential user base 100X by providing some useful tools. So, i give 5 points for the 101's hardware, but hindered by -2 for the BLE stuff on the smartphone side of things.I'm sure there are some people who can make this thing really sing but I'm not one. yet.

about 6 years ago by Member #851647 verified purchaser

I love the board. There are so many applications with the BLE and built in gyro. The software for the IDE gives me a hard time with Windows 10. Other than that, it's great!