If you've ever seen a boxing match, you know that two people 'box' each other in rounds. To train, boxers use a timer on the same time base as a fight so that their bodies get used to 3 minutes of boxing and 1 minute of rest, during a bout.

My goal was to re-create the timers found in our local Front Range Boxing Academy.  At the gym, a common boxing timer is used and the bulbs keep burning out. That is unacceptable in this day in age with LEDs lasting at least 30 times longer than regular incandescent bulbs. These common boxing timers are also expensive ($99)! 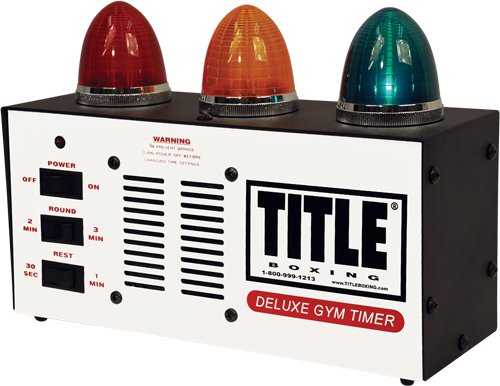 Some days it is painful being an engineer. Looking at this hunk of metal, I know inside there is just a microcontroller, a loud speaker, a couple switches, some lights, and a whole lot of empty space. ..
This is a pretty straight forward project! Forgive me, but I tend to use a lot of stuff around the office that is readily available. And because this was meant to be an example project, I used all through-hole components.

I hope you can use parts of this project for your own project: 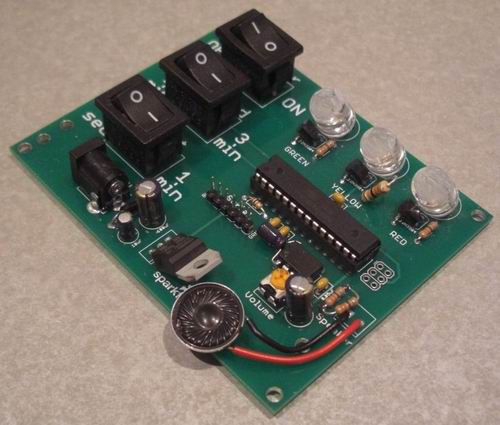 You may have guessed, but I used the ATmega168 (my favorite for the past year or so), along with the LilyPad 8MHz internal oscillator based Arduino serial bootloader. What is that? The Arduino bootloader is based on the STK500 serial bootloader. This allows me to reprogram the ATmega168 over a serial link rather than using a hardware programmer. This made the code development cycle a bit easier and would allow Arduino users to use this board with their environment.

So there's the micro, 5V supply, three painfully bright LEDs, and three rocker switches.  One rocker switch is used for Power (On/Off), the other switches are used to control round length (2 or 3 minutes) and rest time (1 minute or 30 seconds). 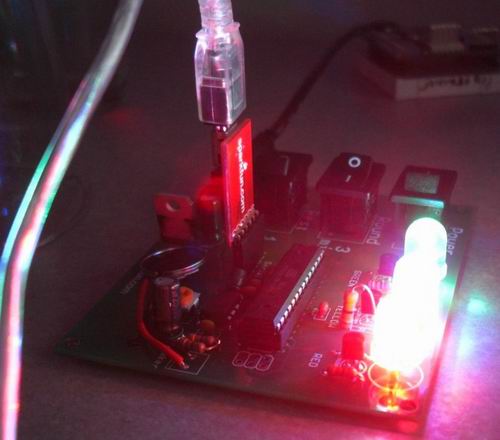 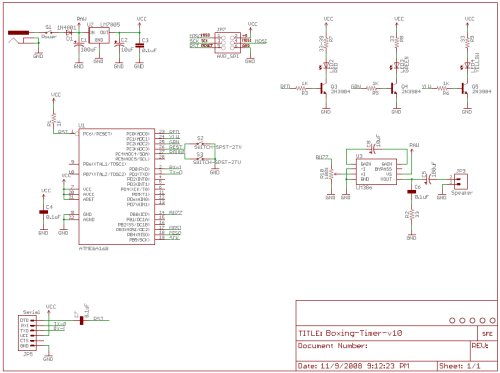 Boxing Timer Schematic
I used a LM386 1W audio amplifier to try to increase the speaker volume. It's loud and annoying, but not quite loud enough for a gym environment. My supply voltage is only 9V (12-15V would be better) and I believe the speaker is a bit small for my application.

The LEDs require a max of 80mA so I used a basic NPN 2N3904 transistor circuit. If I used normal 20mA LEDs, I could have driven them directly from the AVR - but these LEDs are bright.

At the boxing gym, these timers are rarely turned off so I chose to use LEDs instead of incandescent bulbs. Green, yellow, and red indicate where in the round the timer is currently at. The LEDs are 10mm, large, 80mA LEDs. I covered the LEDs up during development, they burned my peripheral vision so badly! For actual use, I used a Dremel tool to roughen the tops of the LEDs in an attempt to disperse some of the light. It helped but the LEDs are still very powerful.

Boxers train on the various bags and equipment for 3 minutes on, 1 minute off, to get their body used to exerting energy for a given length of time. The yellow LED goes off when there is 30 seconds left in the 3 minute round (basically the end of round warning). These three lights, along with a loud tone lets the boxer know at what point they are within a given round. 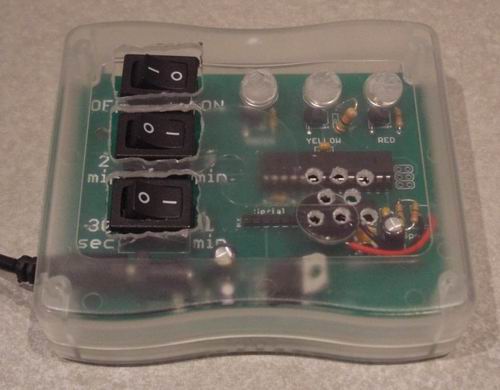 Modifying enclosures is hard! Luckily, we have Casey's tutorial to refer to.  Using a Dremel tool made all the difference. The plastic of the SparkFun enclosures is pretty soft making it easier to drill/cut/beat into submission. It's obvious I need more practice, but the box worked. I cut out three spots for the switches and drilled a few holes to increase the sound coming from the buzzer. 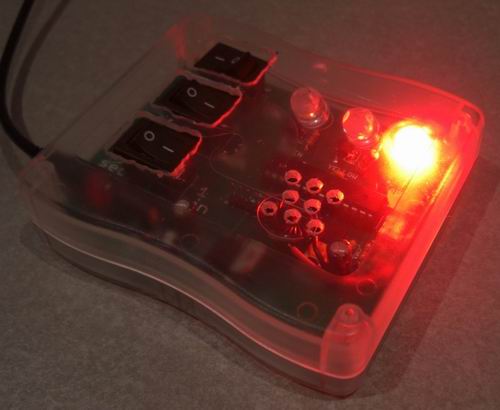 And there you have it - a boxing timer. This is a great example project for what a microcontroller can be used for. In this case, the microcontroller reads a couple switches, makes noise, controls various LEDs, ands spend the majority of its life simply "delay_ms" counting.
I hope you can use parts of this project for your own project:
Cheers!
Nathan Seidle