Blinking In The Sky


Electrical Engineer - ?I want to make some clothes with the Lily Pad stuff.?

EE - ?Maybe with some light sensors hooked to the LEDs to follow the music. Man, its windy outside.?

Me - ?For sure, and with some buzzers so when the music is rocking you can really feel it too. God, it's been windy the last few days.?

EE - ?Sweet, a shirt like that'd attract all the girls that went to RIT... This wind is perfect for a kite, I haven't flown one in years!?

And thus, the LilyFlyer was born. The goal was to create a kite that had LEDs so that the kite could be flown at night. Additionally, using an accelerometer, the tilt of the kite can be determined and the LEDs can be changed so that the kite changes colors as it does tricks. You can take a look at the final Arduino sketch here.

This project turned out to be my (the lone Mechanical Engineer in the SFE ocean of EE masters) return to programming. The last stint being a small project using MatLab to analyze bridge trusses...not nearly as cool. With that in mind, I wrote this tutorial for those folks that know a tad more about sewing then electronics.

LilyPad is an Arduino based programming tool designed for integrating electronics into clothing (or kites) that you can program over USB. It is a great way to get your feet wet if you are looking to jump in the pool of programming/electronics. With lots of easy tutorials already on line teaching about Arduino and LilyPad, I'll skip the gory details of learning this stuff. You can read lots here or here for that part (don't worry, later I link to the final code I wrote). There are many different LilyPad peripherals, LEDs (tri-colored and super-bright white), light sensors, buttons, buzzers just to name a few. All are very easy to learn how to use.


Now for the kite, instead of going to our local kite store and buying one (that would be way too easy) I purchased the XITR Dual Line Sport Kite Kit from Good Winds Kites. Yea, intermediate to expert level for my first kite sewing project...that should do just fine...

If you have never sat down to a sewing machine before, I wouldn't recommend this kit as your first project. There are a few others on the Good Winds site that might have been a better choice. I came across a few sewing terms I didn't know until the instructions stopped me at these points. Here are some of those and the best examples (I found) of how to create them-

Topstitch - To lay open the previously sewn fabrics with right sides up and the seam allowance underneath. Great pictures at backpackinglight.com.

Hem - To fold the fabric over twice, so that the raw edge of the fabric is encased in the fold and then sewn (from ehow.com). 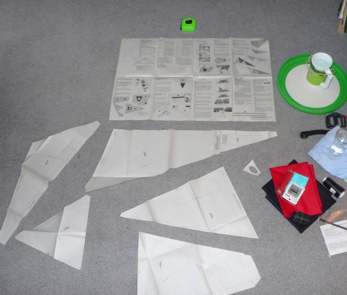 All the patterns cut out and ready!


After blowing the dust of my sewing machine and cutting out all the patterns from the kit, I realized just how deep I had sunk...not too much light down here.

Pinning the pattern to the fabric

First things first, I had to cut the different kite panels from the patterns in in the kit. One indispensable piece of advice a friend gave me (thanks Sidney's girls!) was to pin the pattern cutout to the fabric before you start cutting. This was essential to keeping the cutouts the correct shape. 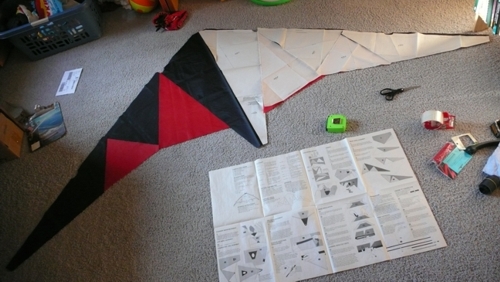 All the sections cut out and in place


With all the sections cut out, I finally got a good idea of what the final kite would look like...sweet! Sewing was by far the most time consuming part of this project, a close second was the programming of the Lily pad (not all of us are electronics wizards at Spark Fun). A note for those of you sewing up your own kite. At first I didn't look through the kit very throughly, just the directions. The instructions state you need almost four yards of two inch Dacron tape. As a good little engineer, I went to our local kite store and bought four yards of two inch Dacron tape, complete with the sticky backing that tape normally comes with. 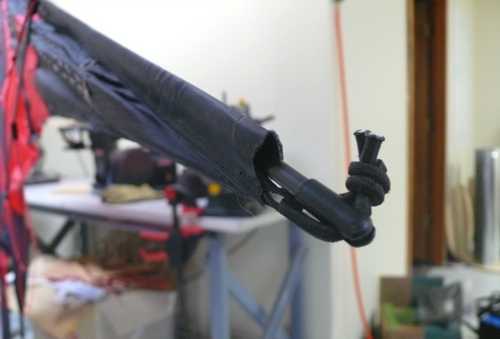 
Most of the Dacron strip is used for the leading edge sleeve that holds part of the kite framework. As I was taping this on the already sewn panels I thought, ?this is perfect, the sticky holds the tape in place, the sewing will be like shooting fish in a barrel.? And it was, but it wasn't great for making a sleeve. Once it was done I couldn't shove the leading edge spars (that's kite talk for supports) in there, and believe me I tried. Frustrated on one hand that I had to take the nose and both leading edges completely apart. On the other hand it was ten p.m. and the kite store wasn't open. I looked back at what Good Winds had sent in the kit. Sure enough, there was a roll of non-sticky Dacron tape. Really!?! Yes, really. 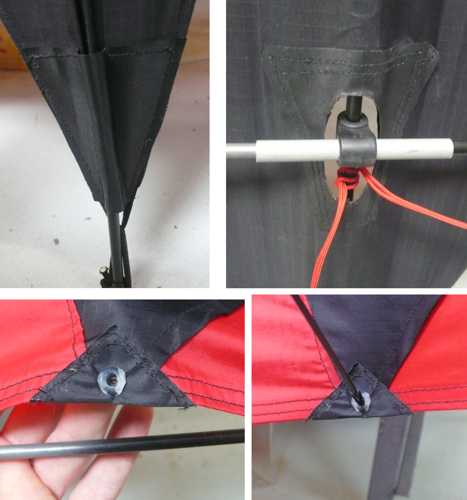 Close ups of the different supports


On a positive note, the sticky Dacron tape was great for adding the smaller reinforcements, if you don't mind getting your sewing machine needle a little gooey. Mentioning supports, you can see in the picture above there is a small spar that is held in place by the tension of the sail and a small hole. I made the ?small? holes a little too big and had to add some hot glue so they wouldn't pop out while the kite was flying. To make the holes I used an old soldering iron tip. This worked really well for cleaning up any frayed ends on the kite too. Since all of the fabric and thread are nylon based the melted together really well. 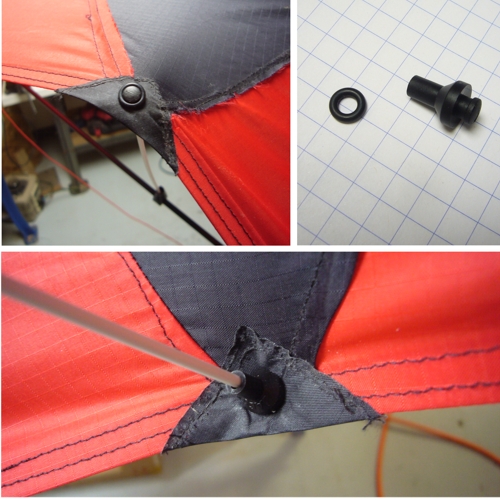 
Update: I was hanging out at our local Boulder kite shop (cause I do that in my free time) and some guys there told me about different supports to hold the spreader (the tiny spar that add tension to the sail). I bought two of them and quickly added them to the kite by enlarging the current holes just a tad with an old soldering iron. Place the small end through the hole attacking from the front of the kite then put the rubber grommet and voila! Tons better then the hot glue method!!

This finished up the kite, next up, the electronics. 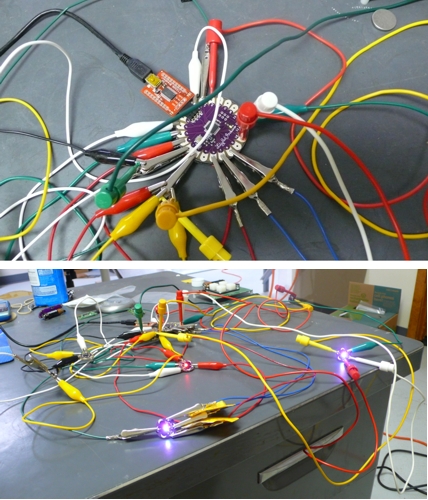 
As I mentioned above, LilyPad is an awesome gateway to embedded electronics. The LilyPad programmer utilizes an open source platform called Arduino. I decided to add an accelerometer to the nose and the left and right wing tips coupled with a tri-colored LED at each of these points. Through programming I was able to get the LED to display a different color when the paired accelerometer was pointing left, right and up/down. With this I know the orientation of the kite when flying at night...yea, flying at night.

Leah Buechley's LilyPad Arduino web page was a fantastic place to start learning how to use Arduino. Her tutorials have a nice flow from the very basics to intermediate/advanced projects. As you can see from my testing set up, I attempted a semi-complex task for never using these things before. You can find a copy of the finished code here.

Once the code was all settled, I had to figure out a couple things. First, how to pass the signals and power from the main board to the peripherals (accelerometers and LEDs) on the kite. SparkFun now carries conductive thread for this task exactly. I was a little skeptical at first but this stuff is awesome! Next, how to transfer that rats nest of alligator clips and wire to the kite. 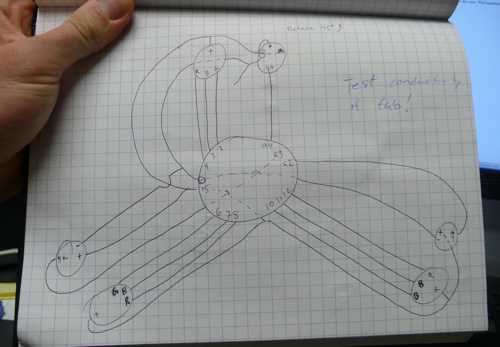 
This was my first attempt at drawing out the connections. Placing the accelerometers with the correct orientation on the kite was important so they would all respond the same way. Once the schematic was sorted out, I taped the LilyPads to the kite in their respective places. Next I had to add the ?traces.? On a printed circuit board (PCB) a trace is the tiny little line that connects one pin on a component to a pin on a different component. 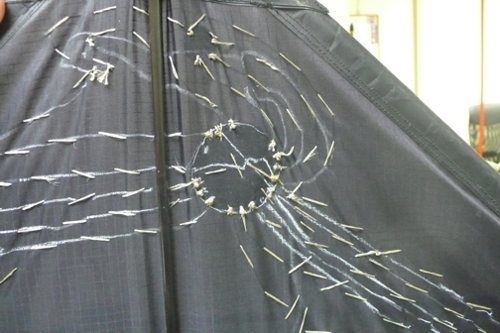 The sketched (and sewn) trace lines


I decided to draw out my trace lines on the back of the kite with a white oil base pencil so that the front would remain un-tarnished. In doing that, I realized that what I had drawn on paper (the front view) was a mirror image of what I needed to draw on the back of the kite. Aw crap. When I did get that sorted out and started sewing, you can see that I followed some of the lines very closely and others not so closely. Just as long as you know what you are doing then you are all set. 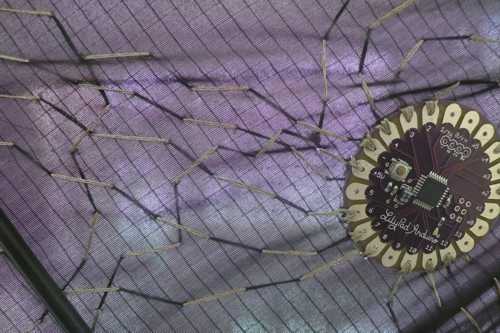 
Once I started sewing the traces, I made quite large stitches. The reasoning was two fold, first to get done quicker and second to have a material insulator if I needed to cross lines. Since the thread has no shielding (rubber around it) like typical wires do, any thread lines that touched would be connected. Also for this reason I left a fair amount of room between each trace/sewn line if there was room.

There's a little trick in electronics design, if three different traces are going to the same point (for instance the +5V lines on my schematic) they can be connected anywhere, just as long as the + pin (the ?+? means positive voltage, like the + side of a battery) on the peripheral is connected continuously by thread to the +5 pin on the main board. I was able to use this trick to cut out a lot of messy sewing! 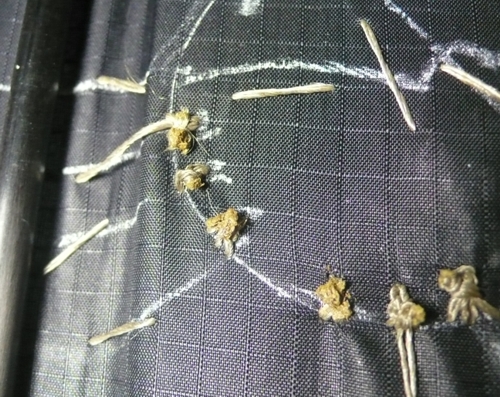 
A nice thing I learned about conductive thread is that it will melt onto itself similar to nylon based threads. Melt isn't exactly the right word, it was kind of a mix between soldering and pushing melted plastic around. Anyway, it took away the frayed ends making the knots very clean. I would do this after sewing three loops through each hole (also called pin) on the boards. This ensured a solid connection. 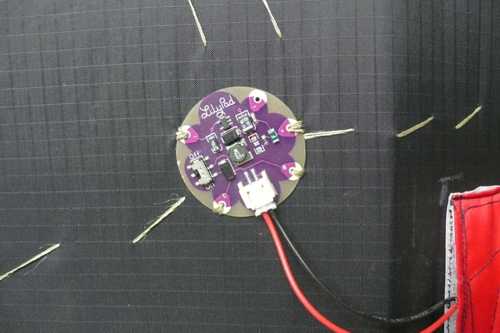 
Sweet, ready to go right...not quite, electronics need power. In this case I didn't need a battery that lasted for hours, realistically how long would I be flying a kite any given night? I decided to use the LilyPad LiPower board. This little PCB can be plugged into directly by a tiny LiPo battery, regulates the output exactly to what the main board is expecting and has an on-off switch. Perfect! 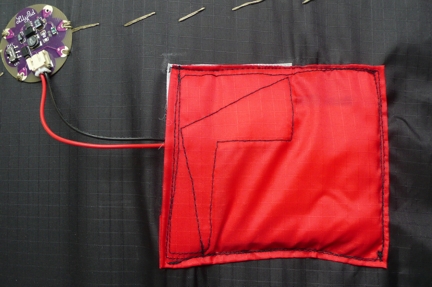 
I added a simple Velcro pouch with some of the left over kite material and Velcro I had. Being the last step, it was a pain to deal with so much kite while sewing but I had no clue where it was going to be placed until now. Maybe you can plan a little bit ahead now!

The moment of truth, turning it on for the first time...Bada-bing! Worked the first time, I was absolutely amazed considering how much thread was zig-zaged around that thing. 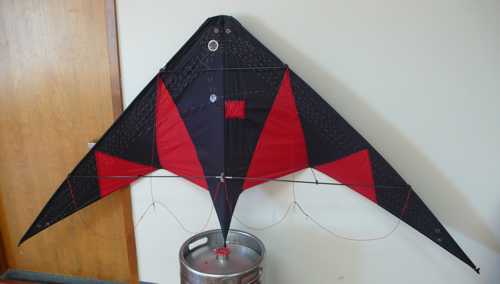 Not too shabby for my first go. I forgot how much fun it was to fly a kite... 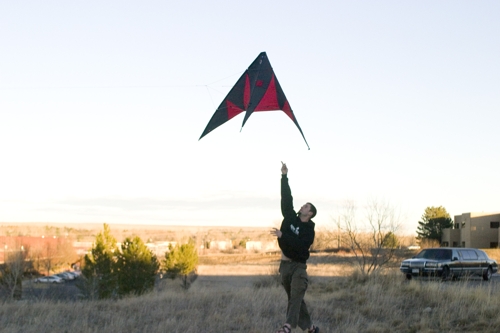 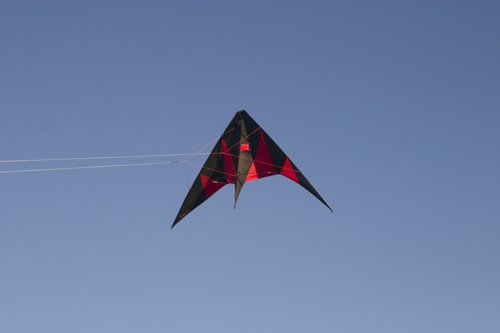 If you have any questions or have built your own LilyPad project by all means send pictures our way.