This is a quick tutorial about making a practice amp for a guitar. Very quick. And dirty. In fact, it sounds remarkably dirty. The amp is made from some junk I found in my basement, along with two op amp break out boards from (you guessed it) SparkFun Electronics.

Ten Bucks and Some Junk

I started with the op amp boards, figuring I?d use one for a gain section and one for a master volume. Getting those was a breeze: just snatch them off the shelves when no one?s looking. Then I had to go hunting for something to play it through. If you're like me, you've got many boxes full of junk stashed in the corners of your living space. Some info for the unmarried guys, spouses look dubiously upon these hidden treasures. But we know that they're there for just such opportunities. In one of mine, I found an old GE CB radio. A solid piece of gear as its case was all metal. Splitting the case got me an 8 ohm speaker and something on which to mount all the junk, along with a couple of nice pots for power/gain and master settings.

The basic electronics are ridiculously simple (given the sweet, sweet outcome). Just plug 2 op amp breakout boards together in series, stick a guitar at one end and a speaker at the other. Check out the schematic here: GuitarAmp.pdf

OK, a very small amount of extra thought went into it. The op amp breakout boards are AC coupled on their inputs (necessary since I'm not running with a bipolar supply), but not on the outputs. So I did have to add one cap, a 100uF electrolytic to couple to the speaker.

The mounting logistics are just about as simple:

Following the first sound tests, I added the pots from the CB (first yanking out the original pots on the op amp boards), mounted a 6Ahr lipo, and gave it a blue LED for a power indicator: 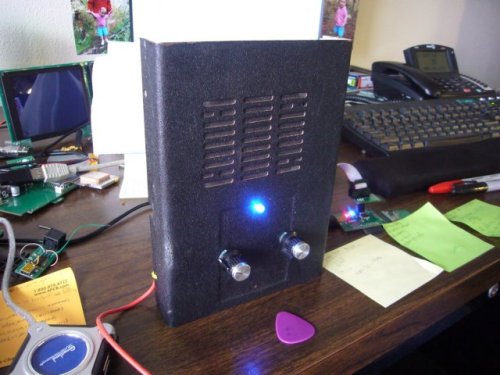 Followed by more testing with our own Pete Lewis...

That's Choppy on the couch with Pete. I don't think he was all that impressed. And if you're interested, the guitar is a Music Man Silhouette Special. 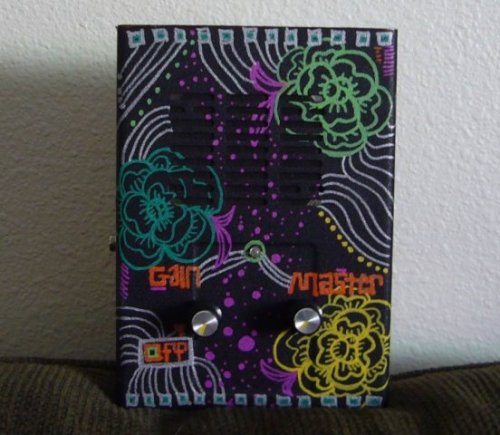 The final result is one-of-a-kind looks with one-of-a-kind sound. Does it sound amazing? Well, that depends how you define the term. Honestly, I haven?t even bothered to put it on a scope to see what the waveform is doing, but I promise you that it?s deep in saturation when it's cranked. With the knobs all the way up to 11, it makes some truly profound noises. Turn it down and it's a pretty decent clean channel.

My regular amp is a Fender Blues Jr. With my little cheapo as a preamp, I expect some interesting results. Rock on, my brothers.