I hate keys. I am on a mission to dispose of them all. There is currently a key pad to enter the SparkFun building, a key pad on my home, and RFID to get into the interior rooms at SparkFun. It is my goal to get rid of the last key in my pocket, my Mazda key! I combined the Nike+iPod device and my key fob, with an Arduino Pro Mini, to create the iFOB.

A few years back we posted a tutorial on how to use the Nike+iPod for active RF identification. The Nike footpod transmits a unique ID every time it is used. I would much rather have a small footpod in my pocket than my full car keys. So how can I get a Nike footpod to unlock my car? It was actually not too hard: 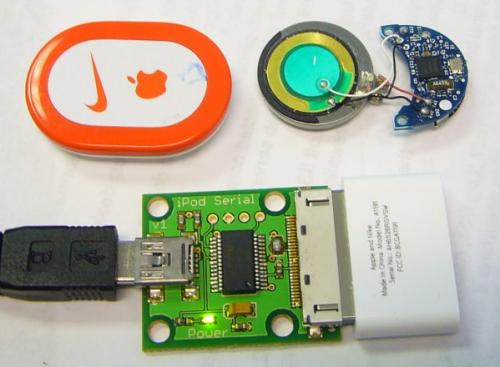 You can see the internals of the footpod (it's a Nordic IC!) and the receiver hooked up to our iPod serial board. The iPod Serial board allows direct access to the Apple receiver. Here are the two initialization strings:

Once we send these two serial strings to the iPod receiver, the receiver will report a serial string of about 33 hex characters every time a footpod is heard. Within these 33 characters is the unique ID of any footpod within range.

So here in lies the goal of iFOB: design a system that listens for a unique ID (kind of like active RFID) and does something when the correct ID is heard. In this case, unlock the doors to my car. 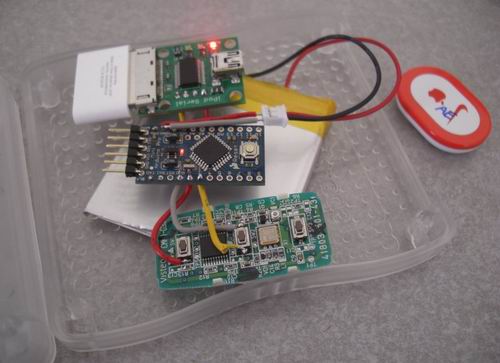 So here is iFOB! In the middle is the Arduino Pro Mini running at 3.3V. The Mini is powering the iPod serial board (at 3.3V) and has serial lines connected (TX and RX) so that the Mini can configure and then listen to serial responses from the iPod receiver.  I used a clear SparkFun enclosure so I could see the status LED on the Mini for debugging.

At the bottom of the picture is the internals from the key fob to my car. I've got one wire connected to ground (the gray one) and two wires connected to the other side of the 'lock' and 'unlock' buttons. When the Arduino Pro Mini tells the red wire to go low, the key fob thinks I am pressing the lock button, and my car locks! Simple enough. The fob currently uses its own 3V lithium coin cell, but I may connect 3.3V from the Mini some day. The coincell lasts for months or years so I'm not too concerned.

On the right is a foot pod used for testing. It's labeled 'AE' (the last hex digits in its unique ID) so that I can tell it apart from the other footpods I had laying about.

This entire device lives inside my car. The Mazda computer is smart enough to ignore the key fob if the car is running so I don't have to worry about spurrious signals from my pocket locking and unlocking my doors while I'm driving. 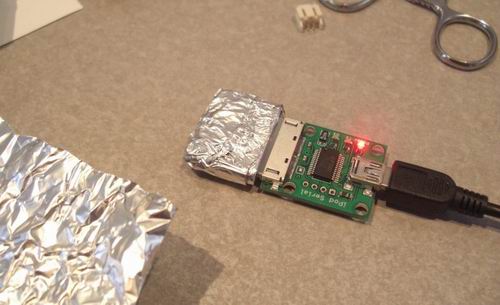 While testing I found the range of the transmitter (the footpod) was really pretty impressive at 50+ feet. This was cool, but I didn't want my car to be unlocking/lock while walking around my house or office. To cut down on the reception, I sabotaged the antenna. I could have hacked into the footpod, but then it wouldn't have fit so nice in my pocket. Instead, I completely wrapped the receiver with a few layers of aluminum foil. This cut the reception down to 20-25ft. Jeesh! What do I have to do to kill the power on these things? These devices are designed and built very well! 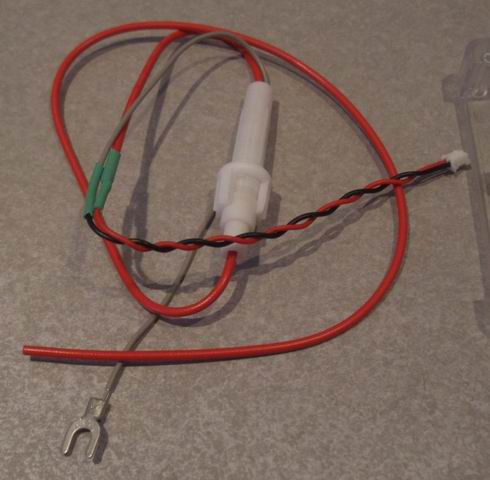 I needed to pull power from the car's battery so I created a simple wiring harness. I was a bit worried about the iFOB mercilessly frying my electrical system, so I put in an inline fuse for a $1 worth of insurance. 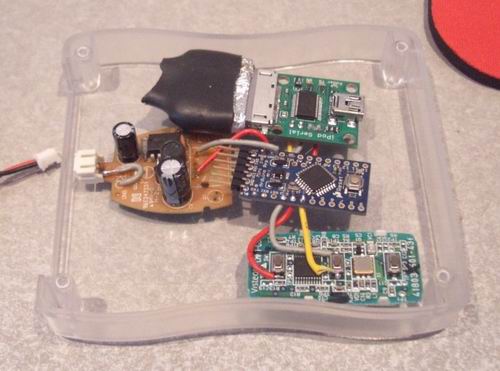 Here is the iFOB with antenna snubber (that's heat shrink to hold the foil on), Arduino Pro Mini and the stock FOB for my car. The board on the left is the internals of a USB cigarette adapter. This USB adapter takes in 12-24V from the car's electrical outlet (the now universal cigarette jack), and outputs 5V so that you can charge USB devices. I then wired this 5V to the raw input pin on the Mini. The Mini then regulates this (some what noisy) 5V down to a clean 3.3V, all with pretty decent efficiency. I don't want a power hog draining the car battery!

I removed the housing and USB connector from the cigarette adapter and installed a JST connector. This made i so that I could easily disconnect the iFOB from the car if need be. I was worried that I may need to remove the iFOB if I took my car into the dealer, or if I parked the car for an extended amount of time. It turns out this was a very good addition as I ended up reprogramming the device quite a bit before I got the code working solidly. 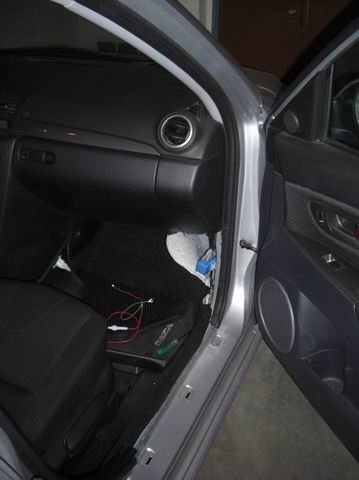 I decided to intall the iFOB in the passenger side foot well. I figured this would be a good place to find a 12V power wire. I know nothing about cars so I just started pulling back panels until I found wiring. Wow is there a lot of it! 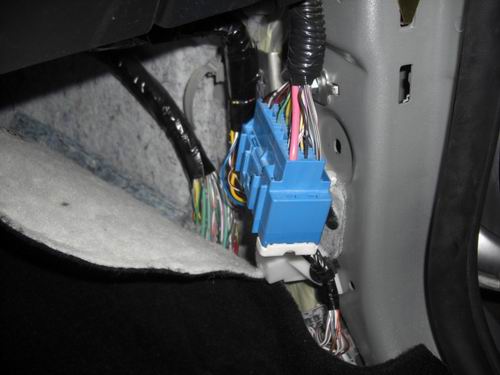 To find 12V I used my trusty multimeter. Luckily, I found a wire nearly immediately that registered 12V but it was a thin black and gray wire. To be sure this was directly off the battery and not a control wire, I tried to do a continuity test from the positive terminal of the battery to this pin. No good - I didn't get direct continuity. Is it because I am testing the impendance of a rather long wire? I'm not sure. But it's 12V right? I used some nifty automotive quick splice connectors and tapped the black and gray wire. I just need a few mili-amps, no big deal right?

The iFOB behaved very oddly. Sometimes it would work, sometimes not at all. I couldn't figure out what the problem was. I guessed that the power system might be causing the ATmega168 on the Arduino Pro Mini to latchup, so I decided to add a watch dog timer to my Arduino code. The watch dog timer runs in the background of the chip and if the system code freezes, the watch dog resets the chip, clearing out the locked up variable or code. It worked for the Apollo missions - why not now? 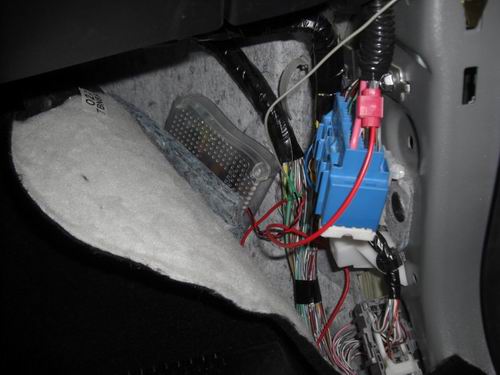 The iFOB wired up and hanging out in foot well

I'm not sure what the black and gray wire is, but every time I plugged the iFOB into the car, the car would honk. I assumed this was the iFOB powering up (GPIOs tend to twiddle during power up) and accidentally hitting the lock button twice (causes the car to honk). Over time I began to realize I found some sort of 'honk' wire. I also found out that this wire would turn off after an unknown amount of time, kind of like your dome light turns off after the car is locked for 15 seconds. It was too difficult to sit in the car for hours on end to find out if in fact the wire was powering down, so instead I just tapped into the big fat red wire that registered 12V. This is a direct line off the battery. And when I plug in the iFOB, the horn doesn't honk! Hrmm.

After a few more days of testing, frustration continued. The system worked during testing, but during normal, everyday use, it did some very annoying things. Mainly, as I walked up to the car, the doors would lock! What in the world? More testing, and I found out that the Mazda has a neat security feature built in: if an unlock command is received by the car's computer, but a door is not opened within 25 seconds, the computer will automatically re-lock the cars.

Ah hah! The iFOB was picking up my footpod some distance away from the car (like in the stair well down to the parking lot). If it took me 28 seconds to get to my car (from the point at which the receiver picked up the footpod) the car would automatically re-lock after 25 seconds, right before I pulled on the handle. A bit more Arduino code and the iFOB now unlocks the doors every 10 seconds while the footpod is heard, and until the car is started. This extra bit of code fixed the relocking problem.


The system now works great! When you've got a handful of stuff, it's great to know the doors will automatically unlock as you approach. However, I still have use a key to start the car. The next step is get a big red button wired up for button start so that I don't have to carry my key. Someday.