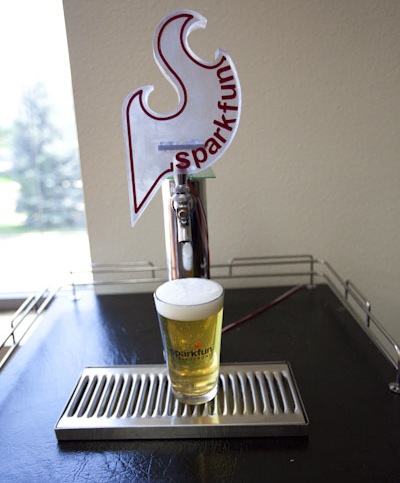 It's a not-so-well kept secret that SparkFun has a keg in its breakroom. At any given time (ok, really just in the late afternoons) you can find a wayward employee filling his or her pint class with a tasty lager or ale. It help keeps us sane, improves company morale, and gives us something to brag about to our friends. However, the drinking habits of SparkFun employees can be tough to track. One keg might last us three weeks, or three days (if we're under a lot of stress). Rather than trek down to the breakroom to check if the keg is empty, we wanted a way to monitor the keg remotely from the comfort of our desks. 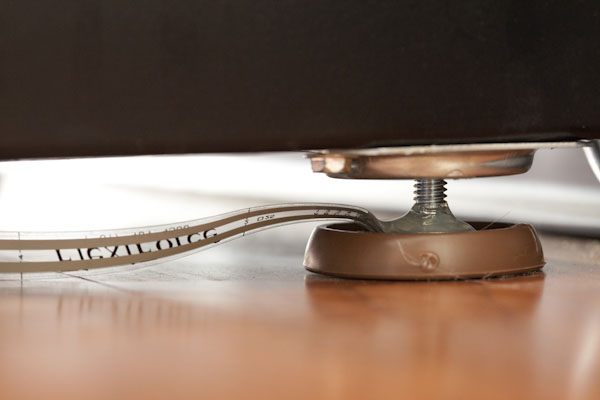 This is the weight-sensing apparatus - a force sensor, some scrap PCB, and a furniture coaster.

So what's the easiest way to tell if there is anything left in a keg? Why, picking it up of course! If you hoist the keg up in the air and don't feel the tell-tale swishing of liquid inside the keg, you've got an empty keg in your hands. And of course, the heavier the keg is, the more nectar is contains. However, when your keg is delicately placed inside a kegerator with a tank of C02 alongside, it's not always so easy to pick up the keg and gauge the contents. Plus, we all know what happens when you shake a container of suds and foamy beer is not our friend. So what we did was use four 100-lb. force sensors, which were sandwiched in some furniture coasters with scrap PCB. We threw some hot glue in there as well to help support the force sensors a little more. 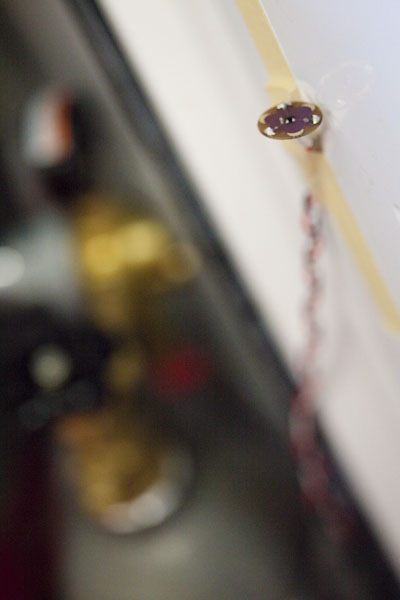 A LilyPad temperature sensor taped inside the door.

Now that we can gauge how much brew is left, what else would be good to know? Let's see...temperature would be nice, just in case the fridge goes on the fritz for some reason. We used the LilyPad temperature sensor because it's fairly easy to interface with its analog output and using it minimized the number of wires in our system.

Taking It a Step Further 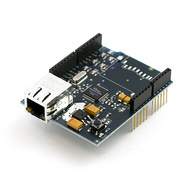 Communicating via the Arduino Ethernet Shield.

So, we have these five sensors and need a way to read their outputs remotely. We are using an Arduino as our computing workhorse, but how do we remotely access the Arduino variables? Connecting the Arduino to a PC via USB crossed our minds, but that sure seems like a magnificent amount of overkill. Now, we don't often shy away from overkill in a project, but we can't always go that route. Fortunately we carry a nifty gadget called the Arduino Ethernet Shield. 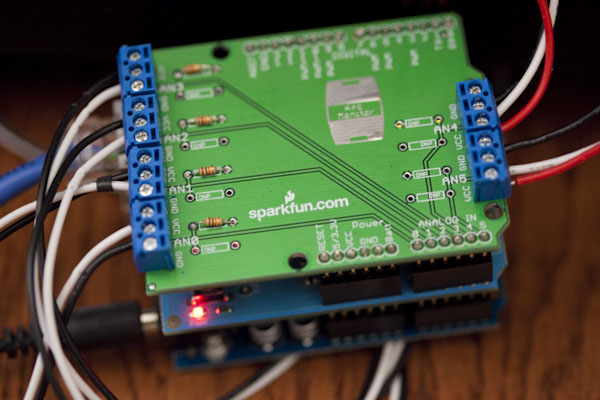 Top to bottom: the Keg Monitor shield, the Arduino Ethernet shield and the Arduino Duemilanove.

The sensors would need to be somewhat more permanent than wires just sticking into the Ethernet Shield's header. We put together a "Keg Shield" that had six Three Pin Screw Terminals - each three pin screw terminal would have a power, ground and analog input that connected to one of the Arduino's analog inputs. Near each terminal, there were empty places for resistors to bias individual analog inputs. This was needed for the force sensors, as they were only two terminal resistive devices. With the Keg Shield designed and sent off through BatchPCB, we could start work on getting the Arduino serving up the analog measurements. Here's what the webpage looks like: 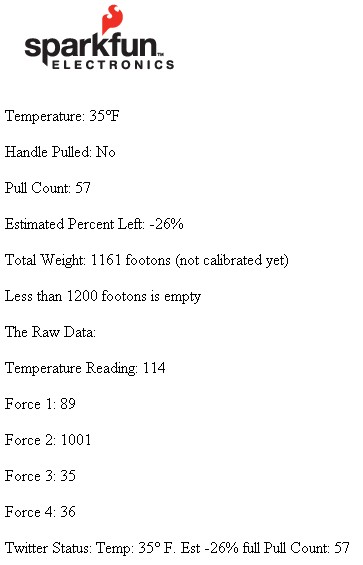 Not too shabby for an 8-bit microcontroller!

Like any other project we do, it's never truly complete. One day, Prashanta, one of the folks over in purchasing, suggested we make the keg "tweet."  With that goal in kind, we set out to see just how much we could make our Arduino do.

At that time, the keg used the Arduino Duemilanove with an ATmega168 instead of the ATmega328. If we wanted to add Twitter capabilities to this project, we needed a little more "oomph" in our microcontroller. But, as the saying goes, waste not, want not. We tried to massage the code, to use PROGMEMs and the string library, but to no avail. We could not get the chip to properly work. Rather, it would Twitter some manner of unintelligible mush. So finally, we gave in and switched to the ATmega328. Success - you can follow the Twitter feed here!

Initially, the Twitter code had the Arduino only tweet when it was reset - great for debugging or knowing if there was a power-outage, but not truly tweeting. With the use of a reed switch, some magnets, and a dose of fiddling, we added the capability of knowing when the tap handle is pulled. When a thirsty SparkFun employee pulls a pint, the Arduino lets the world know.

The schematic for the reed-based tap switch. 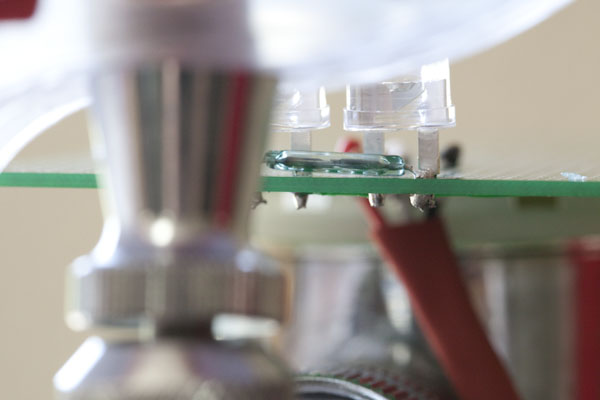 The long blue-green piece of glass is the reed switch which closes when a magnetic field is near by. 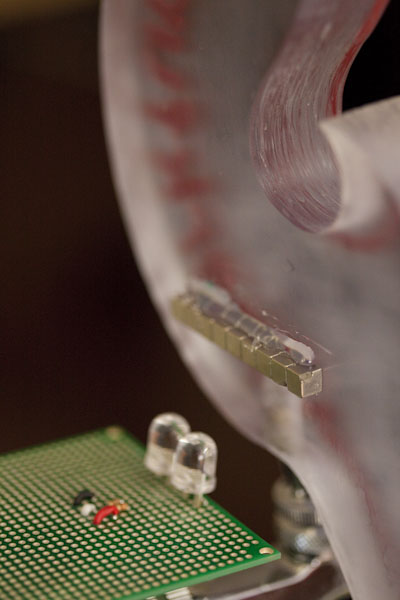 When the tap is in the closed position, the group of magnets creates a large enough magnetic field to close the reed switch. 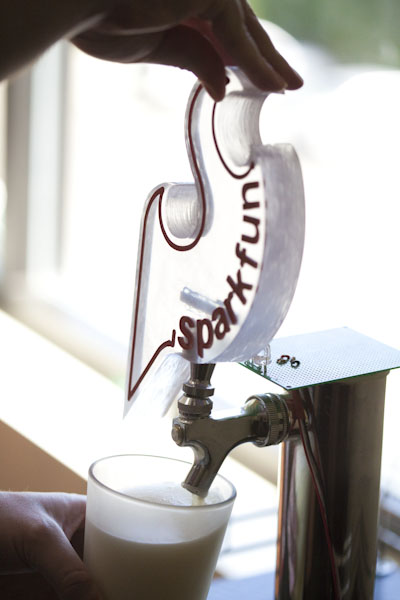 When the tap handle is pulled, the reed switch opens, the LEDs light up, and the Arduino tweets its status.

Now For the Nitty Gritty: Code

The code for this project can be found here and is released as beerware.

The Twitter code itself is pretty straight forward. We used the String library to form the Twitter status that was then passed to Twitter where it was formed into a tweet. These three sites were very helpful in getting the kegerator to sweet like a champ:

Eventually, it became apparent that we would need more than 8 bits to store the pull count in the EEPROM. According to this page, we would overflow an 8-bit counter early into the third keg. There were many ways to store the data, but this way was the easiest and actually worked. When the count is incremented, the EEPROM is read four bytes at a time and pieced together to make a 32 bit number, incremented, broken into individual bytes that are then written back into the EEPROM. The EEPROM will cease to properly write before this counter overflows.

Well the first thing we noticed is that the value from the weight sensors is...really wrong. This is probably caused by a number of factors such as worn out sensors, the hot glue transmitting too much force around the sensors, the sensors not being directly under the kegerator legs and the values from the sensors are not linearly related to the force through the sensors. So our numbers are off and it could be because of a variety of reasons. Further investigation is in order.

We will not have a linear relationship between Vout and Rforce. This further complicates things when we just add the voltage measurements together to get a total force reading. We can fix this one of two ways, change the math in the Arduino or we can change the circuit we use to relate the force sensor's resistance to a voltage.

Thanks goes out to Brennen in IT for the assistance with webpages and IP help. Hopefully this helps you create you with your project! Cheers!