As your embedded project grows in scope and complexity, power consumption becomes an ever more apparent issue. As power consumption increases, components like linear voltage regulators can heat up during normal operation. Some heat is okay, however when things get too hot, the performance of the linear regulator suffers.

How much is too much?

A good rule of thumb for voltage regulators is if the outer case becomes uncomfortable to the touch, then the part needs to have an efficient way to transfer the heat to another medium. A good way to do this is to add a heat sink as shown below. 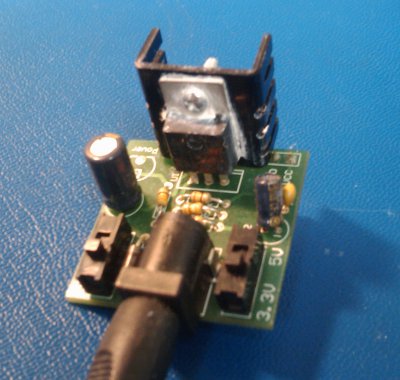 A heat sink attached to a linear voltage regulator on the Breadboard Power Supply.

A heat sink is often times just a big hunk of metal that helps pull heat from the part under load. By increasing the surface area of the heat sink, more of the heat is exposed to cooler air, thus cooling the part more efficiently. This is why you see "fins" on some heat sinks, as shown in the above picture. 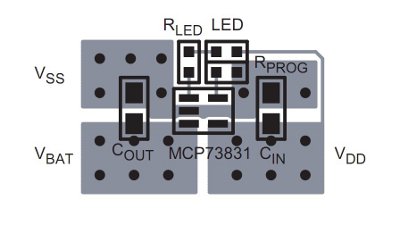 Your layout can also use copper planes as heat sinks.

Sometimes the copper pours on PCBs are used as heat sinks. In the above picture, the MCP73831 LiPo battery charging IC needs to dissipate heat on the PCB. The gray areas are copper planes and the black dots are vias (copper-plated holes to the bottom layer). All of this copper amounts to a greater area of radiative thermal mass, which will efficiently dissipate heat to the outside air.

Why is the voltage regulator heating up?

For this brief discussion we will talk about linear regulators (compared to SMPS). The efficiency of a linear regulator depends on the difference between the input and output voltages and how much current is being drawn by your circuit. The greater the difference between input and output voltage or the greater the current, the more heat will be dissipated by the regulator. This means linear power regulators are not very efficient at regulating voltage, since so much energy is wasted as heat! Switched mode power supplies (SMPS) are much more efficient and are becoming more common, however they can be difficult to use since they sometimes are susceptible to generating noise if not used correctly.

We can calculate the average amount of power a regulator will dissipate, which is directly related to the heat generated by the regulator. 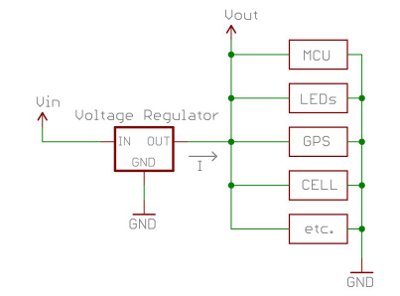 In order to calculate the power used by regulator in the above circuit, we need to know:

We can now use use the power equation and plug in three values to calculate the power used by the regulator.

How much power is used by the regulator in the above picture? Here are the given values:

Use the power equation:

10 Watts is a lot of energy to be dissipated through a small electronic component! This is why heat sinks may need to be used with linear voltage regulators.

An important point to keep in mind: Our calculation can be considered the peak power dissipation of the regulator, because in reality, the system does not draw 2.5 Amps, continuously. The MCU, GPS, and CELL modules generally pulse with current which averages out to a much lower value. But it is always a good idea to assume worst-case-scenario values!