The "Slap Method" for Through-Hole Rework

Soldering is an art. With practice, one can learn to easily assemble complex circuit boards with small-pitch SMD chips. Along the way, you learn several "tricks of the trade": techniques that are not immediately apparent, but make soldering much easier.

However, regardless of how long you have been soldering, you still make silly mistakes every now and then. You put a chip on with the wrong orientation, use an incorrect resistor value, solder headers on the wrong side of the board, etc. This requires rework, and the most frustrating rework scenarios involve through-hole parts. The solder must be completely removed pin-by-pin and the vias cleared of solder before a new part can be installed. This can require hours with a solder vacuum. There is hope, however, in what we like to call the "slap method" for removing solder. This is one of the tricks that can help with the headache of through-hole rework.

As an example, let's say you got a little excited with a new kit and soldered the headers on the wrong side of the board. 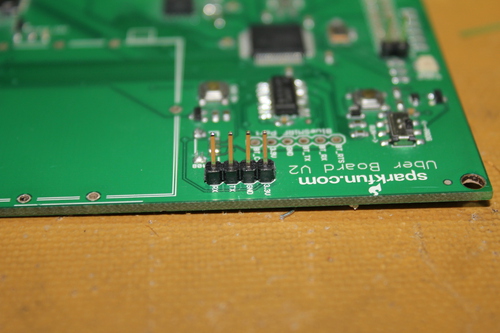 I've used a scrap board for the picture, so the headers are on the right way, but for the sake of the tutorial we're going to remove them anyway. The slap method can be used to remove a part without destroying the part, but headers are cheap and plentiful, so for illustration I'm going to go ahead and cut away the plastic bit to show what's going on. First I'll cut the headers with wire cutters where they would normally break-away. 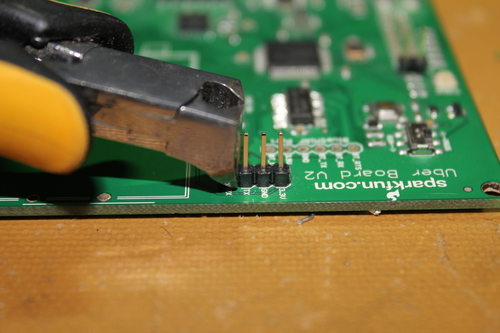 Now I can slide the individual plastic bits off to show just the bare metal. This frees the header pins, allowing them to be removed individually. 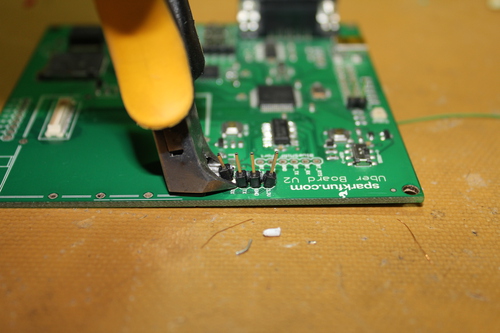 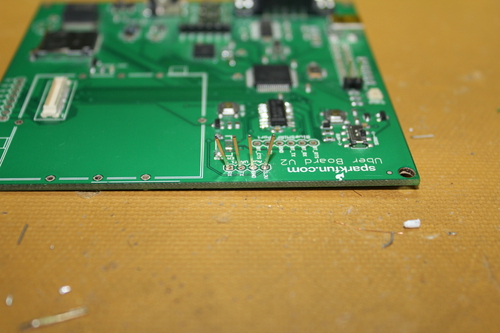 Now comes the tricky part. I turn the board over to work with the "short" side of the headers where they were originally soldered. I hold the soldering iron on the solder joint until the solder is melted. 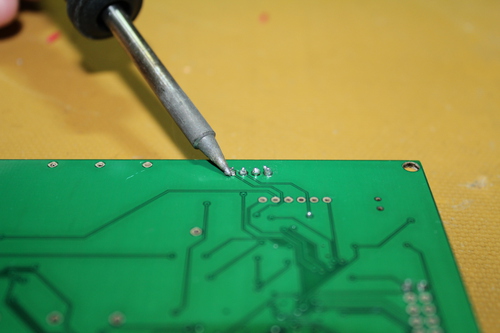 Hold only until the solder is melted.

When the solder is liquid, I hold the board about six inches off the edge of my workbench, and gently (but firmly!) "slap" the edge of the board on the table. 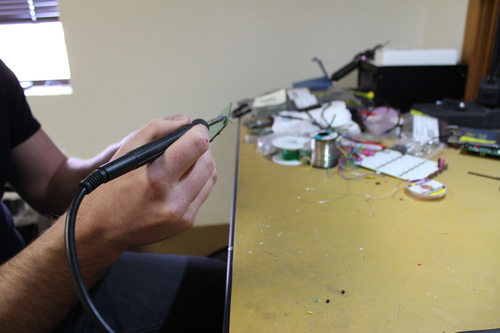 Hold until the solder in the via is melted, 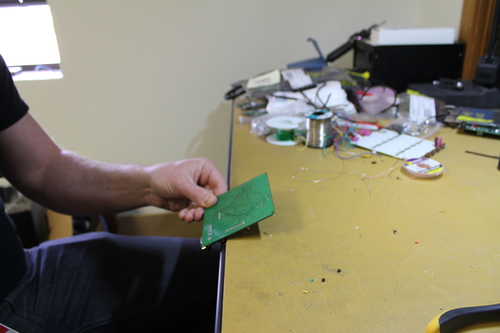 ...and then firmly "slap" the board on the edge of the workbench.

When the board hits the table, the board stops, but the liquid solder (and hopefully the header pin) comes out onto the workbench. The solder is dangerously hot, so once again, make sure to wear protective goggles and clothing covering anywhere the solder might accidentally fly. Once the solder has left the via, it will become solid again in about a second, so it wont be too hot for long. If all the solder or the header pin doesn't come out of the via, simply repeat the process. I do this for each of the pins until all the vias are clear of solder. 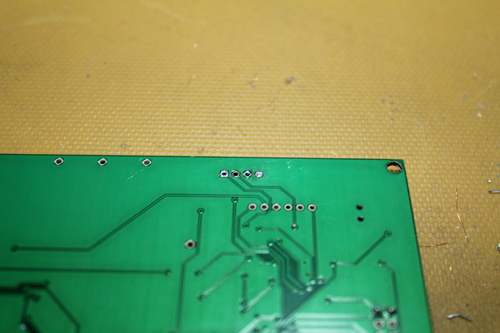 Once all the solder is cleared from the vias, you can re-install some new headers (on the correct side this time!). And you've completed in five minutes what would have taken much longer with a solder vacuum tool.

This can be a bit confusing if you're just going from the pictures, so please be sure to check out the video below for full action-shots!