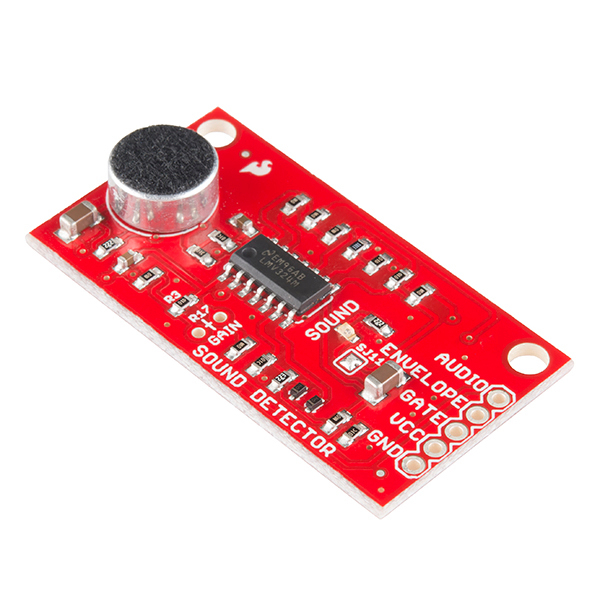 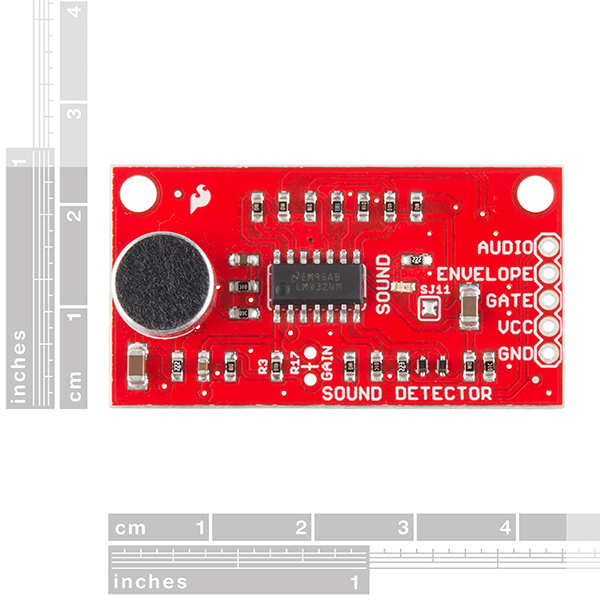 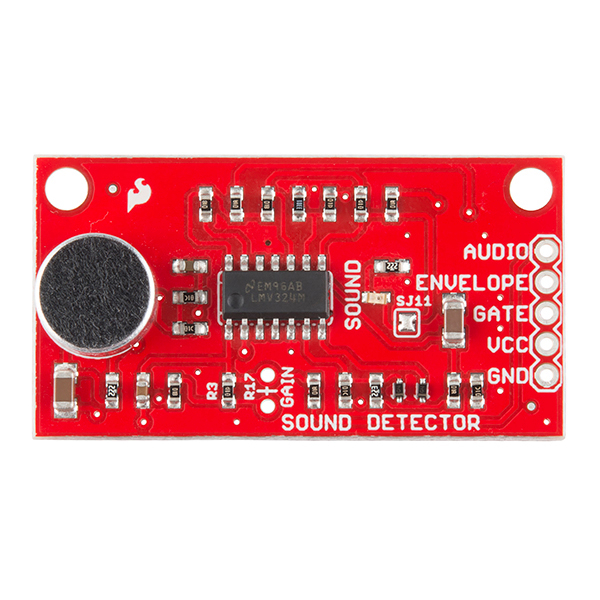 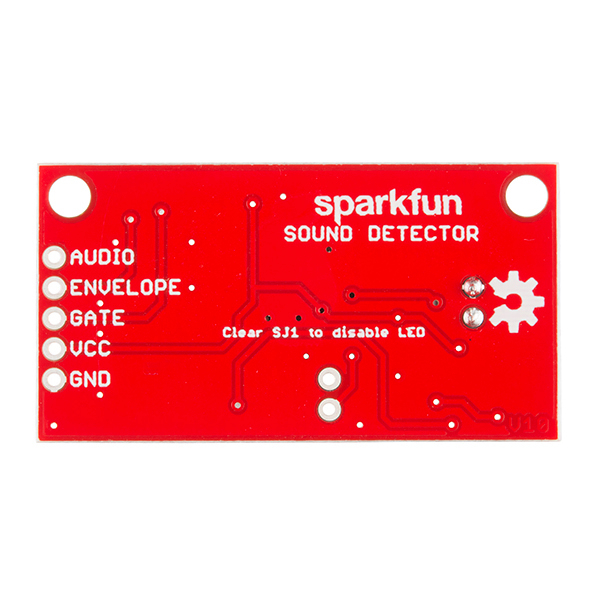 The SparkFun Sound Detector is a small and very easy to use audio sensing board with three different outputs. The Sound Detector not only provides an audio output, but also a binary indication of the presence of sound, and an analog representation of its amplitude. The 3 outputs are simultaneous and independent, so you can use as many or as few as you want at once.

The envelope output allows you to easily read amplitude of sound by simply measuring the analog voltage. Gain can be adjusted with a through-hole resistor, to change the threshold of the binary (gate) output pin as well. Check the hookup guide below for more information about setting gain.

Each of the three output signals is present on the .1" pin-out at the edge of the board. They are active simultaneously. If you aren’t using one in your particular application, simply leave that pin disconnected.

Get Started with the SparkFun Sound Detector Guide

The Sound Detector is a microphone with a binary output. This guide explains how it works and how you can use it in your projects.
Favorited Favorite 10

Hackers in Residence - Sound and Motion Reactivity for Wearables

How to consciously wear light-up and and sound reactive clothing.
Favorited Favorite 14

How to use the Rotary Switch Potentiometer breakout board, with some sample applications.
Favorited Favorite 15

Use an Arduino and the SparkFun Sound Detector to create visualizations on Addressable RGB LED strips.
Favorited Favorite 27

An addition to a previous project, this time using a PC and a custom Java app to create your own music visualizer using a RGB LED matrix.
Favorited Favorite 7

Hackers in Residence - The ElectricBone

Drum machines and keyboards have been the standard for making digital music, but how do you make electronic music if you're trained to play the trombone? One of our Hackers in Residence, Carlos Mello, took it upon himself to find a solution to that very question.
Favorited Favorite 4

about 7 years ago by Member #671316 verified purchaser

I have owned four of these bad boys, and only one of them has broken. However, I am moving these things around a lot so bad transportation may have been a cause. Make sure as any other chipboard to solder in the connections properly. Still learning about the possibilities of this tool.

about 7 years ago by Member #594774 verified purchaser

about 7 years ago by Tyler H. verified purchaser

The gate and envelope pins are what set this apart from everything else I could find out there. The process of adjusting the gain was a bit daunting to me at first, but it's actually very easy!

Definitely would recommend this to anyone looking to add live audio input to their project.

about 6 years ago by Member #803455 verified purchaser

I soldered this to an Arduino 101, with external power supply, its O.K., but with power supplied from USB cable, it constantly detected a sound, because the USB power supply is so noisy. I add a bunch of caps to VCC to GND,, this improved situation somewhat, but still pretty bad as gain was increased. I wish unit came with a built in pot to control gain. I also wish unit has better power supply filtering and/or an onboard linear regulator to help with higher gains. I also removed the microphone, to attach to my hydrophone. it worked great to detect sounds underwater in a jar of water, but it a pool, the detection would never turn off.

about 7 years ago by Member #735711 verified purchaser

Has met and exceeded my expactations

about 7 years ago by Member #33544 verified purchaser

The LMV324 used in the design of this microphone bord is great, however, the gain has to be controlled especially if you are using long lines to connect it to other devices. I used a 100k potentiometer instead of a fixed resistor to populate R17. This allowed me to adjust amplifier gain right before the output starts to oscillate. I am using this board to fire camera, flashes etc when photographing gun shots, balloon pops and any other noise induced event. It is just great since it is compact and can be housed in any small box. I housed mine in an empty prescription vial. I am running 20foot wire so I ran the output into TC4428 and it was just what the doctor ordered. Now I can run a very long line and still have a good control over the gain. I am using Schmitt trigger output only.

about 7 years ago by Member #655395 verified purchaser

i used this sound detector for my MFA thesis exhibition installation piece and it works beautifully. so easy, so effective. it would've been much harder to pull off with something else!

about 3 years ago by Member #797942 verified purchaser

about a year ago by Member #567042 verified purchaser

This detector works quite well. I like the digital output that I can use to TTL circuit.

about a year ago by Member #1525278 verified purchaser

Power, analog and envelope outputs. Easy to integrate into subsystems. Works right out of the box

Link below for anyone looking to set up an IoT system with a Raspberry Pi Node Server. I do not make any money off there videos nor will that ever change. I do them for my students and anyone else interested.

Bottom of playlist is Sound Detector

Works great made it easy

about 6 years ago by Member #4134 verified purchaser

It was exactly what was needed and works great for my project to detect sound. I do wish they had a built in gain variable.

Worked perfectly for what I needed

about 5 years ago by Member #362728 verified purchaser

I used this little sound sensing board to Macgyver together an interface between the sound output from a motion sensor radio to a zwave open/close sensor. This allows me to have a smart home trigger to outdoor movement near my motion sensors. There are a lot of ways I could have done this, but using this sound detector board was simple and so far it has been very robust. Next I think I will use another one to trigger when someone presses my doorbell.

Envelope is the bomb ...

about 5 years ago by Member #906983 verified purchaser

I've play with a couple different sound boards, but I enjoy the envelope signal from this one. It simplifies some of the code when doing the A/D conversion.

about 4 years ago by Member #688933 verified purchaser

My son used these sound detectors for a graduate Computer Science project at UC San Diego for a class on Embedded Logic. He set the gain so the detectors would only hear noise above 110dB, so they could detect gun fire. He used multiple sensors to determine which room of a building the gun fire was coming from. He successfully tested his system with a starter pistol.