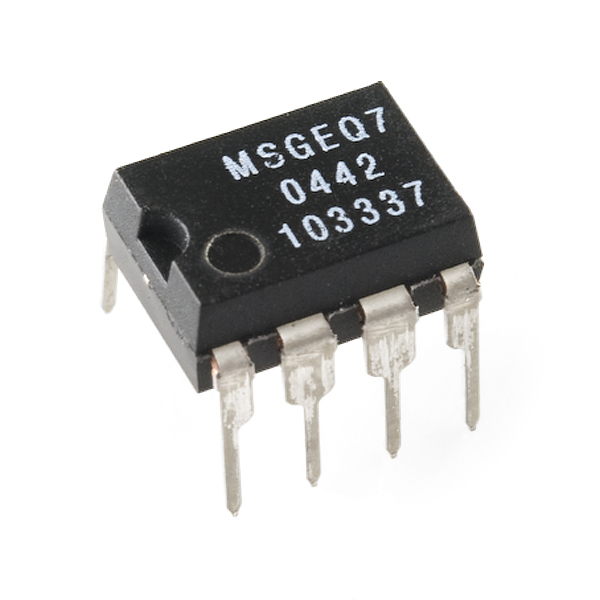 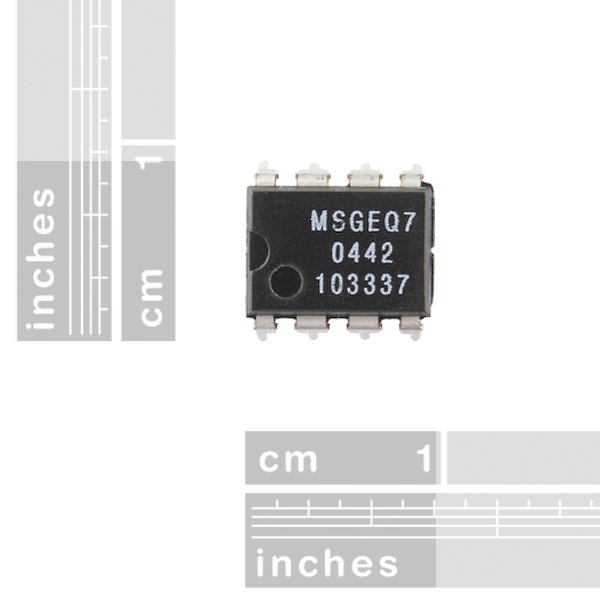 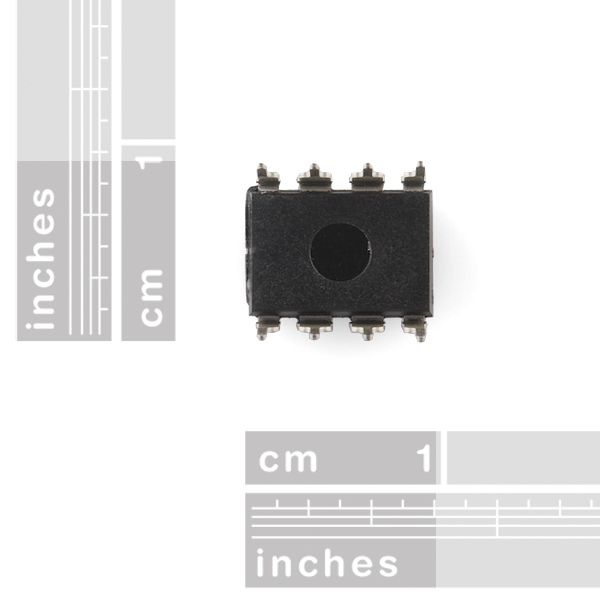 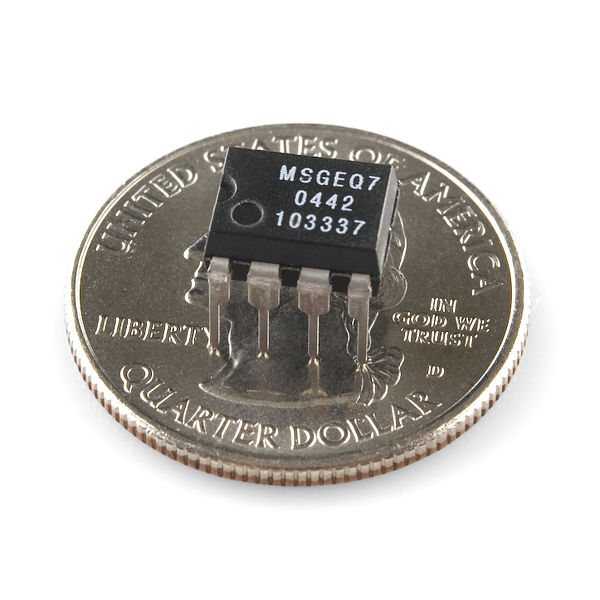 The seven band graphic equalizer IC is a CMOS chip that divides the audio spectrum into seven bands. 63Hz, 160Hz, 400Hz, 1kHz, 2.5kHz, 6.25kHz and 16kHz. The seven frequencies are peak detected and multiplexed to the output to provide a DC representation of the amplitude of each band. No external components are needed to select the filter responses. Only an off chip resistor and capacitor are needed to select the on chip clock oscillator frequency. The filter center frequencies track this frequency.

Other than coupling and decoupling capacitors, no other external components are needed. The chip supply can be between 2.7 and 5.5 volts with 5 volts providing the best performance. The device has very low quiescent current (less than 1ma typical) for portable audio devices. the multiplexer is controlled by a reset and a strobe, permitting multiplexer readout with only two pins. The multiplexer readout rate also controls the decay time (10% decay per read), so no external pins are needed for this function.

about 7 years ago by Member #747018 verified purchaser

I used this to make a color organ, and I got it up and running without any troubles. The only issue is a little bit of noise, but that may be because of my design more than anything else. Would definitely buy again.

I love this thing

about 8 years ago by Chiel verified purchaser

For a while ive been wanting to make a simple Spectrum visualizer. but to do that meant i would i either have to mess with a lot of bandpass amplifier circuits or have to realy on digital filters using Fourier which i lacked the knowledge to do.

This little chip solved the issue pretty well. instead of lots of analog circuitry or digital wizardry i just use this single chip and i get the information i need with enough precision for some fun experiments involving lights and patterns.

about 3 years ago by schmitt trigger verified purchaser

The problem is that the datasheet is very, very limited. One key aspect is that its output should look into a high impedance load to work correctly. There is a small note mentioning the test load (1 Meg, 22 pF), but it is not emphasized.

After wrestling with erratic behavior, I asked myself, "What if a buffer the output?" I added a TLC272 opamp unity gain follower, and it fixed it completely. Works like a charm now.

about 8 years ago by Member #585293 verified purchaser

Everyone knows what this thing is for - and it works as advertised. If you want a spectrum analyzer without doing all the fancy math in-code, get this thing.

Beware, however, of noise and input sensitivity. I had this champ hooked up to an Arduino with the BOB-09964 microphone and COM-12999 addressable RGB LEDs.

First, the LEDs turned on and permanently burned my retinas. Once I could see again and adjusted the brightness, the "output" was still all over the place. This is due to the sensitivity of the microphone - the chip was just doing its thing. So taking the raw-input from the MSGEQ7 and subtracting 127 eliminated most of the noise. Except for the 63Hz band.

I fought this for hours. Replaced the chip three times, turned off my TV, radio, fans, everything I could think of, but the 63Hz band kept flickering even in the quietest room I could make it.

While sitting there, cooling off from frustration, I hear the soft click of my refrigerator's compressor turning off - which was in the other room. The 63Hz band light stopped flickering.

Moral of the story - just because you can't hear it that well, doesn't mean your device will have the same problem.

about 8 years ago by Member #631875 verified purchaser

The fall off rates for each filter are smooth and even, as shown in the datasheet. When analyzing audio sources, there is a lot of distinction between each frequency band, so this makes for a nice 7 band graphic equalizer display. This chip blew my expectations away, making the steep price worth it.

about 6 years ago by Member #810479 verified purchaser

I wanted to have more interactive lights with my sound stage setups, but most of the "sound reactive" projects just involve a simple beat detector, which gives a tempo based on the loudest sound. I wanted to have each color of an RGB led respond independently to different frequencies (Red for highs, blue for mids, etc.) at the same time, rather then just blink lights to a beat. While I read an Arduino can do frequency analyses, the code was huge and beyond my understanding.This chip almost eliminates the need to do sound analyses in your code, and greatly simplify it.

If your looking for guides, use the "The MSGEQ7 tutorial from skoba" and not the "Blinking LEDs to the Frequency of Music by davidwangdw" instructable, as it has the wrong resistor value on the clock pin.

about 7 years ago by Member #808073 verified purchaser

Sorry you're seeing issues with this. If you contact our (tech support team)[https://www.sparkfun.com/technical_assistance], they should be able to help you resolve them.

about 5 years ago by Member #878945 verified purchaser

Does what it is supposed to do, with precision.

Exactly what I needed

Used this little gem to program my rgb leds to light to respective frequencies on an aux input. Does the job nicely.

This is truly an an audio gem

I have not fully tested this gem yet but so far it has shown me out standing narrow band response.

No matter what I do, this thing outputs the same value on all channels and doesn't react to any audio signals. All components I used are good so I give up on this project.

one of a kind graphic visualizer chip

about 8 years ago by Member #521276 verified purchaser

I stumbled upon this convenient chip when creating an LED cube. I wanted to turn the cube into a visualizer for music and thought I would have to create individual filters for different frequency bands, BUT I happened to find this beauty and it worked pretty well! It isn't very hard to get it to work. The only downside is that it is fairly expensive with shipping.

I bought the MSGEQ7 chip and this PCB: https://oshwlab.com/trayko67/spectrum-analizer-dms-307-v-1#P6. Programmed Arduino Mini, wired up LED string and it worked correctly the first time it was powered on. That rarely happens for me.

This piece work out well.

about 8 years ago by Member #648526 verified purchaser

I was happy with speed of shipping. It did not take 1 month like other suppliers.I as like how cheap and small this chip is.

about 7 years ago by Member #698891 verified purchaser

Works well and easy to install. Wish it could work a tad faster (~200ms to get all seven bands) but not too bad.

Expensive, but well worth the money. Easy way to make audio spectrums, saves lot of space from board.

about 7 years ago by Member #278726 verified purchaser