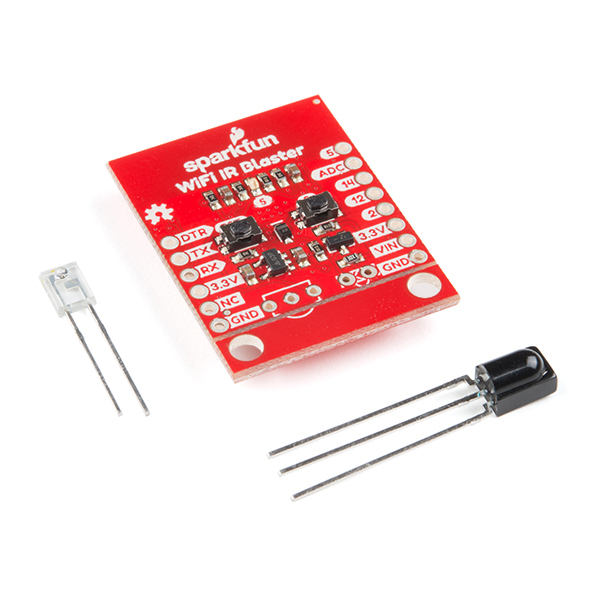 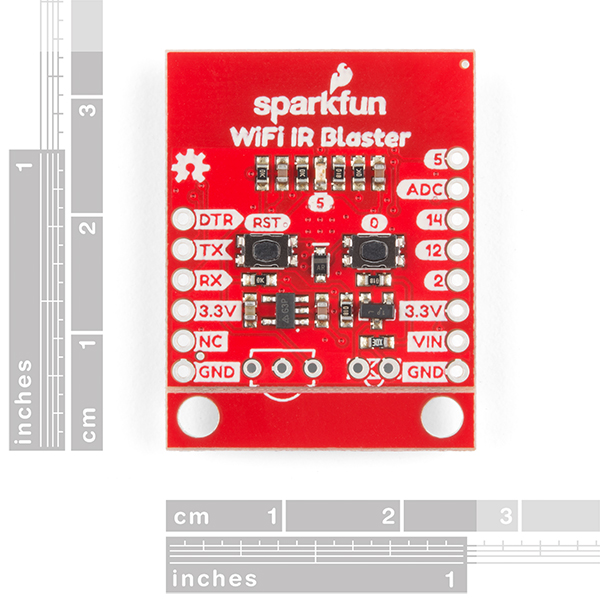 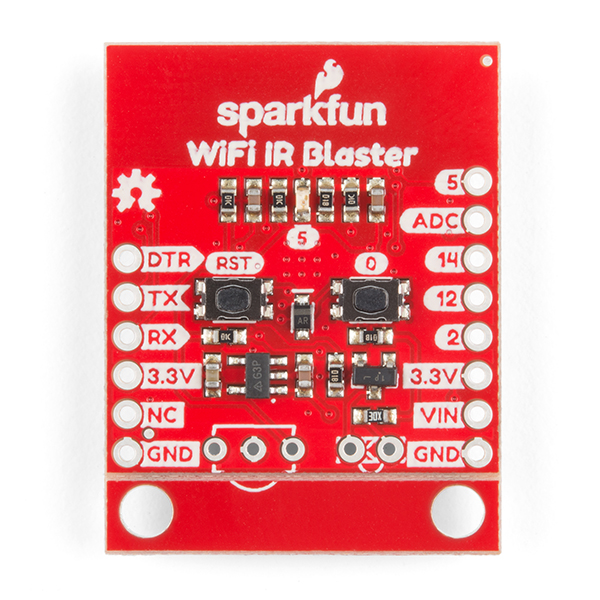 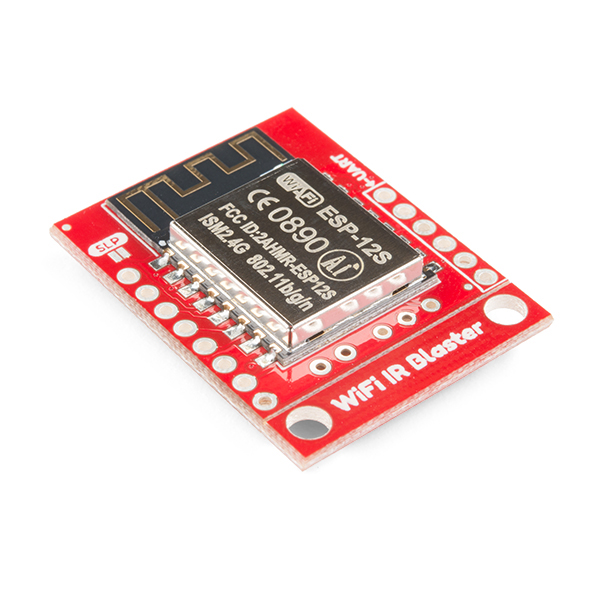 Do you want to control your TV via a web-browser? Want to ask Alexa to mute your stereo? Want to schedule triggers to your IR-controlled LED strip? These are all applications that the WiFi IR Blaster is perfect for. The SparkFun WiFi IR Blaster is designed to connect all of those old, legacy IR-controlled devices to a WiFi network exposing them to a new method of control with the Internet of Things.

The WiFi IR Blaster combines an ESP8266 – a powerful WiFi/microcontroller SoC – with IR emitters and receivers. With built-in WiFi support, the ESP8266 can be programmed to provide an interface between HTTP, MQTT, TCP, and infrared-controlled devices. This module equips the ESP8266 with a crystal, 4MB flash, and a PCB antenna – just about everything it needs to get going. Please be aware that the antenna sits under the SparkFun logo on the board, so try not to place anything that may interfere with WiFi signals near that area.

The IR emitter and detector components are packaged with the board, but not soldered in place. This allows you to solder both components at any angle your project requires. It also leaves the option to customize the board and spec out your own emitter and/or receiver. So some soldering will be required to get the WiFi IR Blaster operational.

Get Started with the SparkFun WiFi IR Blaster Guide

How to assemble the WiFi IR Blaster and program it using Arduino. You'll be controlling IR devices from the web in no time!
Favorited Favorite 4

about a year ago by Member #1324443 verified purchaser

Although this device works very well it does not come with any IR firmware preloaded. That's not a bad thing, just letting others know.

The placement of the emitter and the sensor are easy, just follow the instructions. I recommend that you use a "fine tip" soldering iron.

The mounting holes are a nice touch and useful to me (somewhat). But I would have preferred that they were permanent and at the other end of the board.

Be patient with the firmware you choose to load onto it. The source I used has various adjustments that needed tweaking to get my remote to be received reliably. Once you've got that this device becomes convenient for decoding remotes and creating a program that transmits commands.

about a year ago by Member #1715017 verified purchaser

works great and proves what can be done

about 4 months ago by Member #328398 verified purchaser

I was able to solder the diodes easily and put a 6 pin header into place to allow me to program the ESP8266 from the Arduino IDE on my Mac. First I tried an old Sparkfun FTDI basic breakout but couldn't get the driver to work so I used a CP2102 USB to TTL adapter that used a different driver. The only annoyance was that it didn't have the DTR pin, so I had to press the buttons on the IR Blaster board each time I wanted to send a program.

First I ran the receiver program so I could point my remote control at the receiver diode and then get the codes for each button on the remote as I pushed it. Then I pasted the codes into the web server sketch and tweaked it to allow me to communicate with the server via WiFi and then have the IR Blaster send these codes to the TV and cable box. I rewrote portions of the code to make this all work in the manner I preferred.

One initial roadblock is that the simple NEC Codes didn't seem to work on my TV or cable box, and I later discovered that my cable box didn't use the NEC protocol anyway, but rather something called GICable. Thus I ended up using the longer raw codes as described in the Sparkfun Hookup Guide and had to rewrite some portions of the Arduino sketch as a result. Maybe I could look at the documentation for the IR Blaster Arduino library a little more to see if I could send simpler codes, but the example code only showed NEC format and raw format.

Once everything was working, I wrote a simple app for my iPhone that allowed me to have logos for the various cable stations that I could push and send the corresponding request to the web server (which would then send the IR raw code via the WiFi blaster) as well as pretty buttons for the volume and channel controls and the on/off buttons for the TV and cable box. Now I only have to use one control (the iPhone) to control both devices.

Of course for a few more $$ I could have bought a fully-assembled and enclosed IR blaster from any number of suppliers, but I would have been tied to their own control software. All told it took me about a day or two of coding and experimenting to make everything work the way I wanted it to.