Retired TOL-10241 RoHS 1
Note: Retired Product
This product has been retired from our catalog and is no longer for sale. This page is made available for those looking for datasheets and the simply curious. 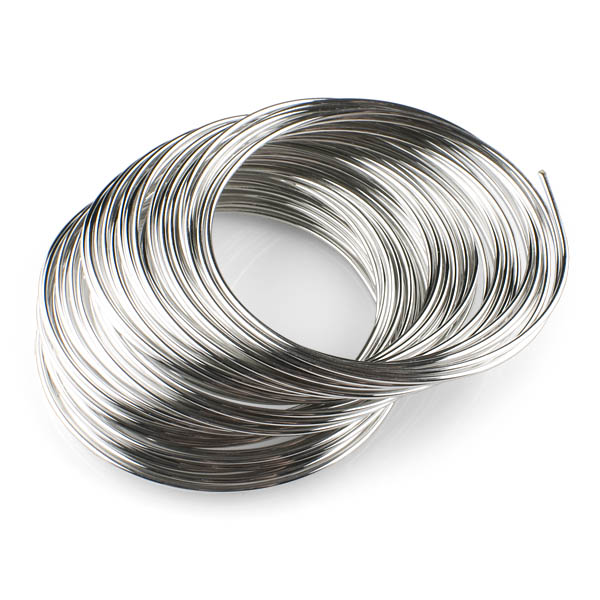 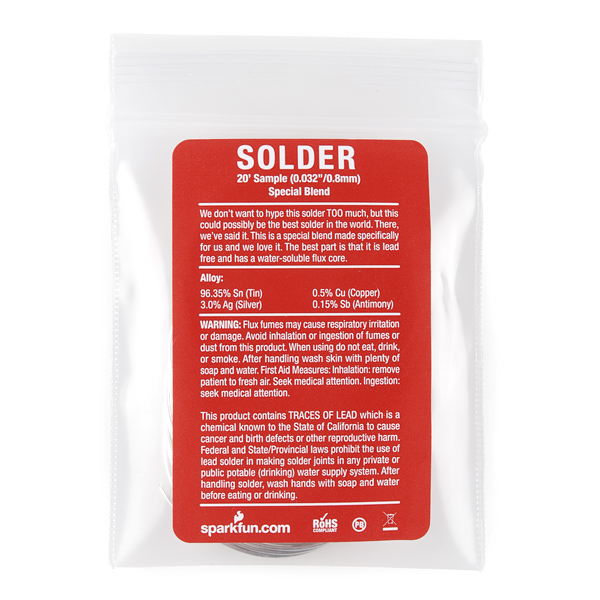 Retired TOL-10241 RoHS
1
Note: Retired Product
This product has been retired from our catalog and is no longer for sale. This page is made available for those looking for datasheets and the simply curious.

We don't want to hype this solder TOO much, but this could possibly be the best solder in the world. There, we've said it. This is a special blend made specifically for us and we love it. It all started as a quest to find the best solder to use in our production process and ended up being the best we've tried. The best part is that it's lead free and has a water-soluble flux core.

Solder seems to work well, but be careful with the flux

about 4 years ago by 2bit verified purchaser

I ordered this thinking, "Hmm, Sparkfun seems to recommend this stuff for lead-free soldering, why don't I give it a try?". It was great of them to offer a sample while it lasted, because then people could give this solder a try for a lower price rather than buy the entire spool for $25. At the time I didn't have that kind of money.

Compared to the other lead-free Sparkfun solder (Sn99e alloy), it was OK. The solder itself seemed to flow well and leave shinier joints than regular SAC305, but I tended to get charred black bits on the iron tip. I later learned that this is the burned flux. As I didn't have the luxury of working in ventilated areas, I got to experience the smell of the flux vapor, and while it's not the most pleasant thing in the world, it smelled better than the Sn99e solder and cigarette smoke. The one annoying thing I found about it was that it was covered in a sticky residue (as I later ascertained, the flux). It was like working with solder and sugar syrup at the same time for some reason.

Fast forward a few years and now that I've learned more about soldering and fluxes, I feel that I should inform people to be careful with this stuff and all water-soluble fluxes in general. While it's convenient to have a flux that you can simply clean off with warm/hot water (and an electronics-safe soap if you've got it), water-soluble fluxes are organic, and they tend to be quite aggressive. Looking at Indium's information on the flux used in this solder (CW-301), its IPC rating is ORH1. Translated, that means, "Organic, high activity, some halides." High activity means that you can use this on brass/copper/tin surfaces that aren't perfectly clean or in circuits where some of the pads are a bit corroded, but this is by no means a "no-clean" flux-- you have to clean this stuff up in a production environment, or you will be very sorry you didn't. Additionally, in situations where the surfaces of your components/boards are already clean to begin with, this is probably overkill and can even eat into copper traces if left on the board. In practice, I don't recall running into a trace failure or such because I didn't clean it off, but because of the aggressive nature of water-soluble fluxes, I would rather be safe than sorry. The presence of halides makes me a bit wary of using this without proper ventilation or filtering of the flux vapors, though to be honest, I don't recall my throat drying out after using this stuff.

It would be cool if Indium/Sparkfun offered this with an RMA flux (CW-802 or CW-807) that isn't as aggressive (doesn't have to be no-clean, I personally like to clean off the board because most fluxes are sticky afterward), or just the alloy itself, since the added antimony appears to improve the appearance of the joints and improve visual inspections. Whatever flux can be added beforehand (I'm liking the Amtech series personally), and as long as the surfaces aren't too corroded, most good fluxes can clean them for most solders.