Retired COM-12781 RoHS Open Source Hardware In Fritzing Library 10
Note: Retired Product
This product has been retired from our catalog and is no longer for sale. This page is made available for those looking for datasheets and the simply curious. 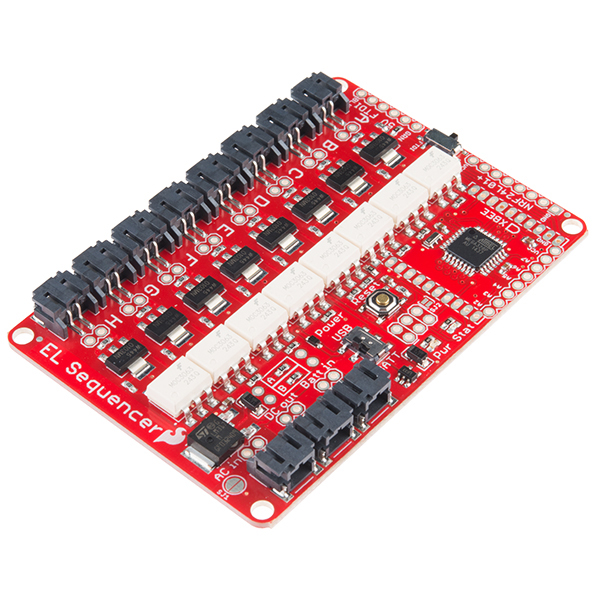 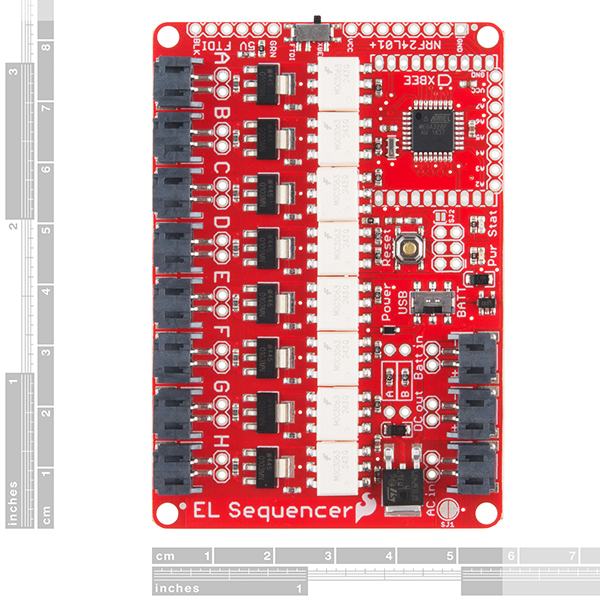 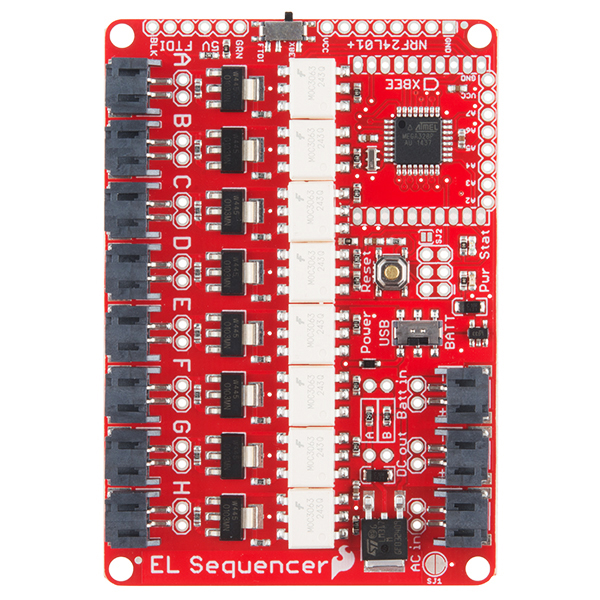 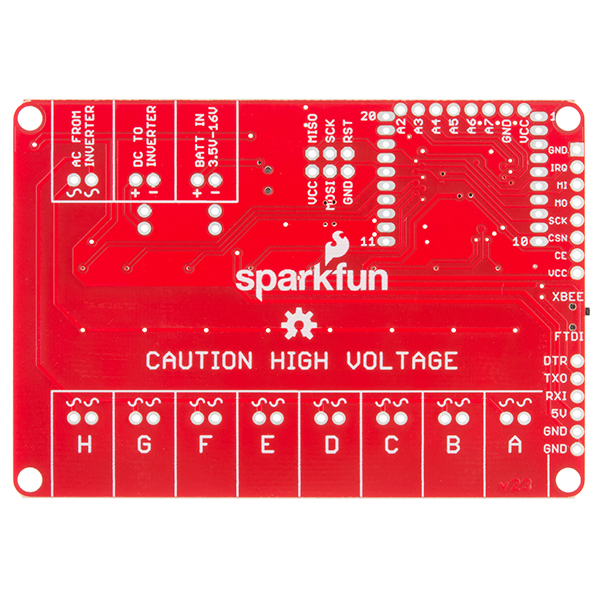 Retired COM-12781 RoHS Open Source Hardware In Fritzing Library
10
Note: Retired Product
This product has been retired from our catalog and is no longer for sale. This page is made available for those looking for datasheets and the simply curious.

In addition to this board, you will need an inverter (a component that generates the high-voltage AC needed by EL wire), EL wire/tape/panels, and a 5V FTDI BOB or cable to load your own programs. The board also has headers for XBee and NRF24L01+ radio modules for wireless projects. SparkFun carries two inverters, a 3V-input version that can drive a few feet of EL wire, and a 12V-input version capable of driving dozens of feet of EL wire. Choose the one appropriate to your power source and driving requirements. The EL Sequencer possesses zero-crossing optoisolated triacs for noise-free operation and full isolation between the AC and DC sides, and includes a 1.5A adjustable linear regulator to supply regulated DC to an external inverter (not included).

Note: We have fixed the silkscreen error on this board; the FTDI "black" and "green" labels have been fixed.

An EL project that displays one person's heartbeat on another person's costume.
Favorited Favorite 9

Learn how to make your EL wire costumes sound reactive in this project tutorial.
Favorited Favorite 18

Why the tiny JST connectors?

about 7 years ago by ChrisKnight verified purchaser

With a plastic bin of Cool Neon wire, I was hoping to whip together a quick animated Yule wreath with this. I didn't realize from the picture that while these JST connectors are very similar to the ones I find attached to most Cool Neon / EL wire, they are a slightly smaller form factor. It would be really nice if you guys offered a 12 pack of the correct connectors, as a recommended accessory to this board. So, at the moment, this board is sitting on my desk waiting for the right connectors to arrive.

As a follow-up, right after I posted this review I noticed that SparkFun had designed in wondrous pass-thru solder points for each and every connector on the board. I was able to quickly solder in a set of Cool Neon compatible connector cables, giving this board dual functionality with a minimum of effort.

Eh, could be better

about 7 years ago by Member #637018 verified purchaser

QC isn't great, the board randomly has strands turn on. Inconsistent features (FTDI/Xbee switch) and incomplete documentation. Also limited pins for buttons. Also no insulation. Only reason I use it is because it's the only microcontroller that drives el wire.

Each board is hand tested for functionality on each EL line. The power cycling of the random lines may be code related. The hardware should not behave that way on it's own.

Does what it says on the tin

about 7 years ago by captain_obvious verified purchaser

Well it works as expected..

Would be neat if had a barrel Jack for powering it and further more the inverter of a wall-wart.

Works well, easy to use, flexible.

about 6 years ago by Member #147145 verified purchaser

I bought this to help a friend add flashing EL wire to a costume. This worked out great because it allowed us to have a single board that fit nicely into the costume and provided a wide range of effects. We used FTDI header to program the micro from Arduino and used a couple of the spare analog inputs to control the effects. There are a LOT of features on this board we did not need, but using this was still simpler and cheaper than creating our own out of an Arduino and discrete components. My only complaint is the JST connectors. These are really not the right thing for this application, and they just make the board bigger than necessary. Most EL wire you buy comes with a different style connector anyway, so I would have been happier to have them left off the board. But on the plus side, providing the downloadable STL file made creating a custom enclosure much easier. The mounting holes helped too, but they are VERY close to the header components in a couple places. This made it a little tricky to mount this in a way that would allow easy reprogramming after assembly.

about 6 years ago by Member #888669 verified purchaser

This sequencer is extremely stable. I use this in my work for my clients and I have never had a single issue out of the 11 I have used. Thanks SF

about 6 years ago by Member #725382 verified purchaser

Seriously thought of giving this only 4 stars due to issues with documentation, but the device itself is solid and has done everything i needed it to. the documentation shortcomings were handled by Sparkfun technical support, although that itself has some issues.

i have two of these and have made several projects. One of the projects required two boards, one that triggers the other. Each project required my own custom code and the arduino interface for programming it was very nice. No issues what so ever and the code I needed was not simple (one over 400 lines!)

The documentation is lacking, especially dealing with the A0-A7 pins... The connections aren't labeled correctly on the board nor in the documentation. It took several emails back and forth with tech support to get that straight.

All in all though, I'm very pleased with the boards that I have and Sparkfun overall.

You guys did a great job with all the extras. Code sample, instruction for someone new to Ardunio. The only thing that could have made this better would have been to bundle all the stuff! Had to purchase the AC power from someone, didn't know I need a header to program the board it had to get that also, DC power for the board to run and all the connectors in one package would have been awesome.

Thank you for your help at making our Halloween Jacob's Latter a successful project. I could not have pulled if off without your great docs and a nice product.

A nice board, but why serial? Why not at least populate the serial header

about 4 years ago by bentwookie verified purchaser

Edit: The boards I received initially didn't have boot loaders, so they weren't programmable. Sparkfun took care of that issue very nicely. They now flash as before. That said, for a $35 board, why am I soldering my own headers on it to program it serially? I have to believe the target market for this board would be more artsy-fartsy types like myself who probably don't even own an FTDI cable. It's a great board otherwise.

It looks like we had a batch of these go out without bootloaders and given the timing of your order, you almost certainly have boards from that batch. Give our support team a shout and they can get you all fixed up.

Used it for a costume with EL Wire and it worked great! Super easy to program and power with the 5v cable. Would highly recommend it for multiple el wire components.