Retired LCD-09067 RoHS 8
Note: Retired Product
This product has been retired from our catalog and is no longer for sale. This page is made available for those looking for datasheets and the simply curious. 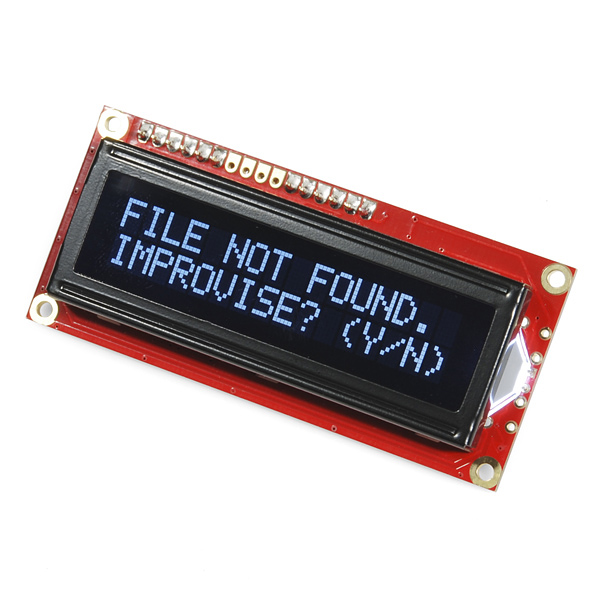 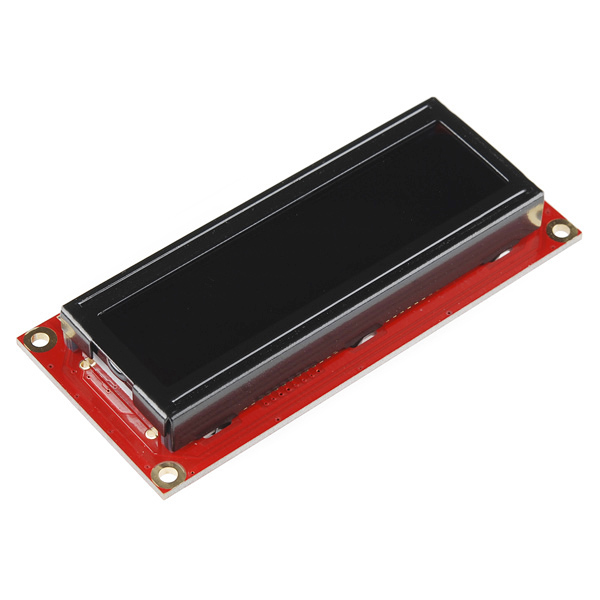 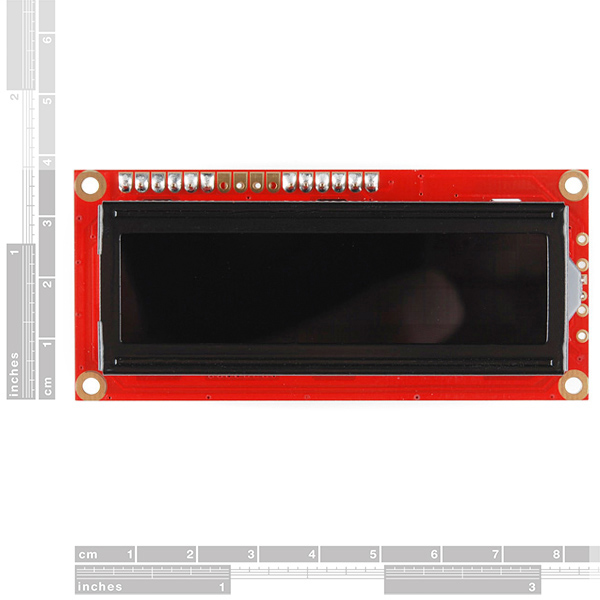 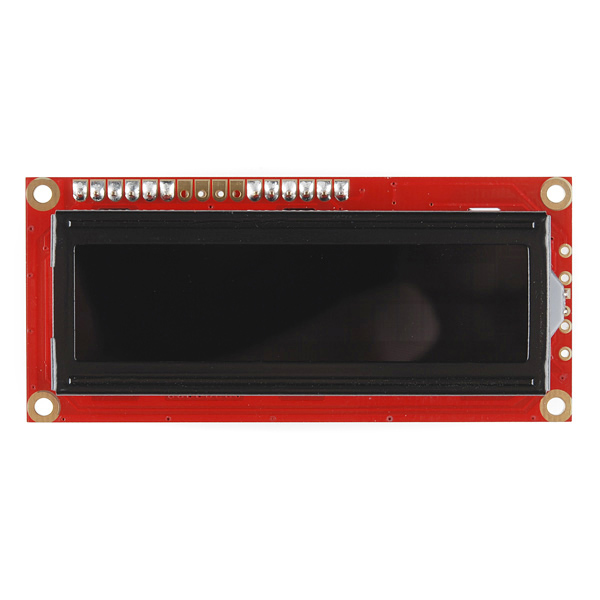 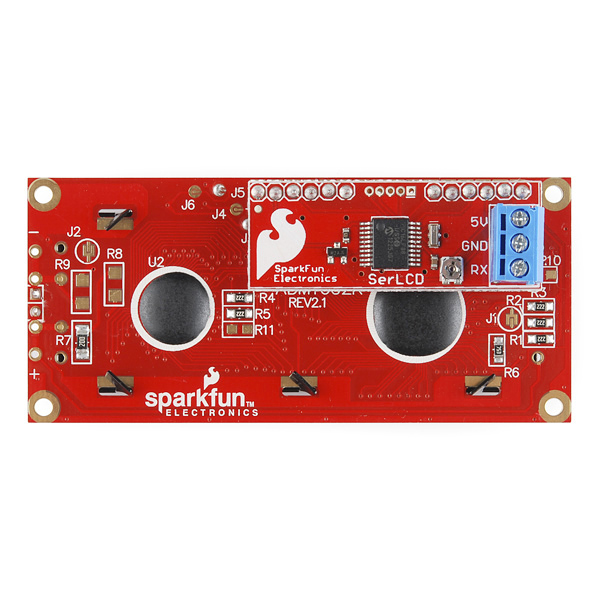 Retired LCD-09067 RoHS
8
Note: Retired Product
This product has been retired from our catalog and is no longer for sale. This page is made available for those looking for datasheets and the simply curious.

The serial enabled LCD allows you to control a parallel based LCD over a single-wire serial interface. Included in this product is a white on black 16x2 LCD connected to our serial backpack. The backpack, based around a PIC16LF88, takes a TTL serial input and prints the characters it receives onto the LCD. The installed firmware allows for a number of special commands so you can clear the screen, adjust the backlight brightness, turn the display on/off, and more.

Communication with SerLCD requires 3.3V TTL serial at a default baud rate of 9600bps (8-N-1). You can adjust the baud to any standard rate between 2400 and 38400bps. The power, ground and RX pins are all broken out to a 3.5mm pitch screw terminal.

SerLCD has the ability to dim the backlight to conserve power if needed. There is also a potentiometer on the backpack to adjust the contrast.

about 8 years ago by RedHeron verified purchaser

When I purchased this, I read all of the comments both good and bad, and I noticed a lot of really negative shots at this, but even so it's still up and being sold... so why not? I had the money available and I needed it in my latest project, so there wouldn't be a lot of issue with it.

The silk screen incorrectly says 5V, which is prominent at the bottom of the description... I would move that note to the top, guys! This is something I'd request to be changed, at least a sticker or some note in the box, so that confusion doesn't abound. That is the main reason for the loss of a half a star.

Aside from that, this LCD display performed really well, and more or less as advertised. I had a few minor issues wrapping my head around the code that only uses a single wire (as opposed to the multi-wire code that's far more common out there), and some of my favorite little code tidbits didn't like it at all because of that (and so I will be rewriting that code, but I enjoy that, so no biggie).

Adjusting the potentiometer on the backpack is simple, and as with any electronics you'll want to unplug the unit while you make these adjustments. It can seem a little tedious, but I appreciated the "set and forget" logic of it, with the remainder controlled in the software. It actually does make things a lot simpler, firmware-wise.

In playing with the baud rates, there was a slight issue with noise at higher baud rates, but adding capacitors to handle the noise on your breadboard should fix that without issue (the rating of those capacitors will vary based on your project, so don't ask me unless you're providing a detailed schematic and a full copy of the code).

The screw terminal works extremely well with typical jumper wires, and I even took the risk of dangling the LCD screen by one of the wires screwed down. I'm probably going to just leave those in there more or less permanently.

After running the terminal for 8 hours, there was no heat issue at all. The LED on the backlight barely gets warm, which signals a great circuit design and a correct application for the LED. I've owned another LCD where the backlight actually got a bit warm, which isn't overly concerning, but if it's added with heat from other components, it might cause a heat issue with other boards. Not so with this board!

The character output was thoroughly tested, and while I'd prefer a 10-dot height per character, this functions at least as well as anything else I've tried. I loaded up a custom character and there was no issue with display. I even made it move around the display a little, and it worked flawlessly.

Long story short: this is a great product and I'm glad to have it. Now if only we could figure out how to drop the price (the other half-star it lost).

First and foremost: I'd like to be able to query the board, one row at a time, as a serial stream (thus adding a Tx to the board that connects to an Arduino's Rx, making it 4 wires). This simple option would add a level of complexity to the design, but it would be an extremely useful feature.

Second: I'd like to be able to adjust the pot without a screwdriver. I grit my teeth every time metal goes near a live circuit, and it would make setting the pot a lot easier for prototyping purposes (though as a part of a finished product, you certainly would want the pot to stay put). Perhaps including a plastic tool for that wouldn't be hard, but that would certainly up the price, too.

Third: Full libraries for Arduino and Raspian's gcc would be highly desirable, especially those which can easily be added to simplify the unit's operation (e.g., LCD.print() would be awesome, as would a few other common commands). Combined with the existing datasheet, it would make this whole thing much, much simpler and more desirable. And as I don't know enough about what I'm doing yet, it's a vague suggestion at best, and best left to those more skilled than I am. Anything to lower the complexity in the software side would help, honestly, but I think a library would go a long way toward that. The serLCD library on Arduino Playground at the very LEAST needs something linked to the main page, and more comprehensible documentation would help greatly... the bare notes there are hard for a newb like me to follow.

And finally: A lower price. Though this isn't horrible as price goes, I'm a cheapskate, and always looking for the better trade-off between price and performance. And while this is really very decent as it stands, a lower price would be on my wish list, even knowing that it would mean I'd never get one because they'd sell out so fast.

To close, I want to thank SparkFun for such a good little product. There were very few actual issues, but a lot of complaining over a few little caveats that would be resolved if people would just RTFM.

about 7 years ago by Zerrien verified purchaser

Easy to use, the backpack takes all the challenge out of actually drawing text to the screen.

However, based on comments and other reviews, I need to knock off 1 star because: The backpack accepts 5V, the LCD accepts 3.3V. After looking all over the device, the voltage listed is 5V on the backpack, which I assume, would fry the device.

3.3V needs to be put on this module, somewhere.

Great product does exactly what I need.

about 7 years ago by Member #725846 verified purchaser

I have never built a project with arduino or using any kind of LCD screens. This was my first and I must say it was a lot easier to do than I expected. The LCD screen is great and does exactly what I needed it to do and was a piece of cake to setup.

about 7 years ago by Member #282738 verified purchaser

I am using this LCD with the Intel Galileo Gen2 and it works great. Even with the TTL being 5V instead of 3.3v it works perfectly.

OK display, but one major issue

about 6 years ago by Member #884461 verified purchaser

This display is easy to install and very easy to use, but it has one massive problem: There's a pretty large gap between the backlight and the LCD panel. The problem with that is that the polarization doesn't work as well as it would if the gap wasn't there. I have similar displays where that gap is a lot smaller, and the contrast is much better at higher viewing angles. But with this one, you have to be pretty much straight above the display, otherwise it immediately starts to fade very quickly. The solution would be to either make the acrylics for the backlight much thicker, or to raise the backlight up closer to the panel - none of which can really be done by the user without damaging the display. Otherwise, the display is very well made, although maybe a bit thick if available space is a concern. The logic runs perfectly under 3.3V, as stated in the description, so I don't really understand the other comments that state it would require 5V. That said, the best display is useless if readability, its main purpose, is impacted like that. In its current configuration, this product is therefore absolutely not worth its steep price.

Works as support files specify. Easy to follow documentation. I used with a PIC24-based system running on 3.3V, no problems. I wish there was a standard mounting bezel available - I had to 3D print my own.

This unit is easy to use, and the lib and documents available on the web site is sufficient. The only minor think you need to adjust is the contrast. If not, you may not be able to see the text you send to it.

about 5 years ago by Member #506221 verified purchaser

Used it for a solder reflow oven I've made. Works good, no issues.