One of the tools we use most when debugging our projects is serial input/output. Serial is very easy to implement, and it allows you to send/receive any data you need from your microcontroller to a computer's serial port so it can be viewed using a terminal emulator. These two devices are compatible from a software perspective, however you can't just hook a microcontroller up to a computer because the hardware interfaces are not compatible.

Most microcontrollers these days have built in UARTs (universally asynchronous receiver/transmitter) that can be used to receive and transmit data serially. UARTs transmit one bit at a time at a specified data rate (i.e. 9600bps, 115200bps, etc.). This method of serial communication is sometimes referred to as TTL serial (transistor-transistor logic). Serial communication at a TTL level will always remain between the limits of 0V and Vcc, which is often 5V or 3.3V. A logic high ('1') is represented by Vcc, while a logic low ('0') is 0V.

The serial port on your computer (if it's lucky enough to have one, they're quickly becoming a relic) complies with the RS-232 (Recommended Standard 232) telecommunications standard. RS-232 signals are similar to your microcontroller's serial signals in that they transmit one bit at a time, at a specific baud rate, with or without parity and/or stop bits. The two differ solely at a hardware level. By the RS-232 standard a logic high ('1') is represented by a negative voltage – anywhere from -3 to -25V – while a logic low ('0') transmits a positive voltage that can be anywhere from +3 to +25V. On most PCs these signals swing from -13 to +13V.

The more extreme voltages of an RS-232 signal help to make it less susceptible to noise, interference, and degradation. This means that an RS-232 signal can generally travel longer physical distances than their TTL counterparts, while still providing a reliable data transmission. 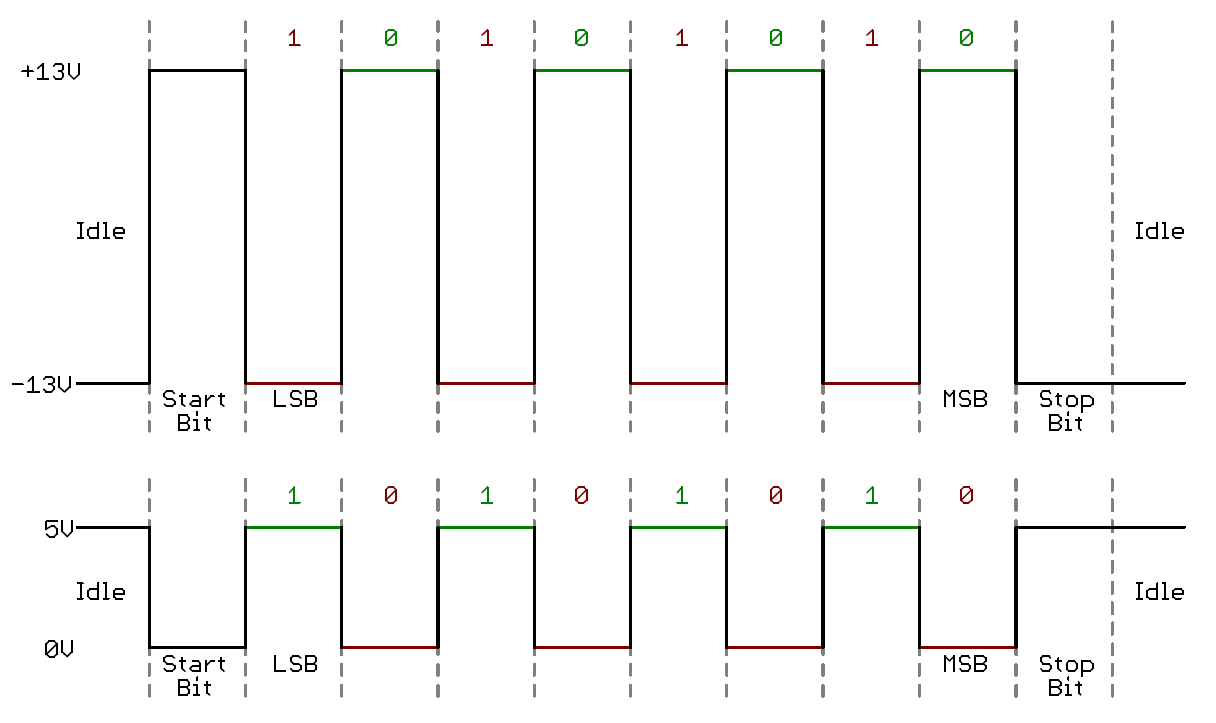 So, you may see where the problem lies in interfacing these two signals. To connect these two ports you not only have to invert the signals, but you also have to deal with regulating the potentially harmful RS-232 voltages to something that won't destroy a microcontroller's serial pins. There are a handful of solutions to this problem of voltage converting and inverting. The most common, and easiest solution is just plugging a MAX-232 in between the two devices: 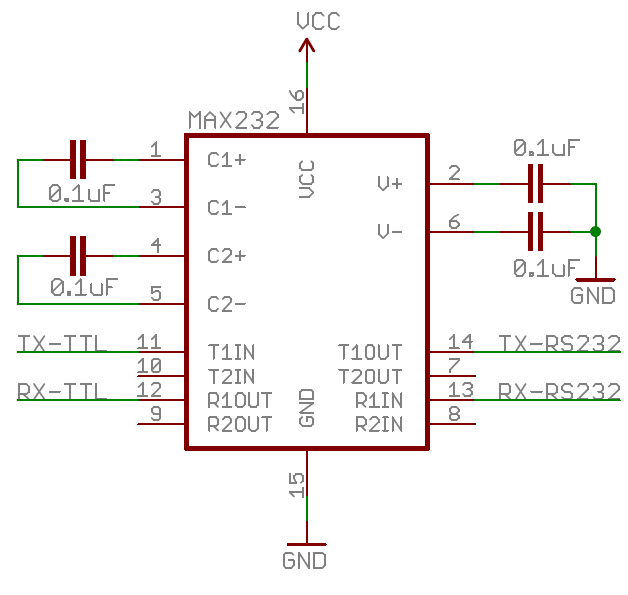 There are many generic derivatives of the MAX-232. Maxim IC just happened to be the first to market with this neato device (decades ago!) so out of habit, we call all ICs that do similar jobs 'MAX-232s'.

Less expensive solutions, like our RS-232 Shifter, use transistors or inverters to flip the signals, and charge pumps to get the voltages high enough to be RS-232 compliant: 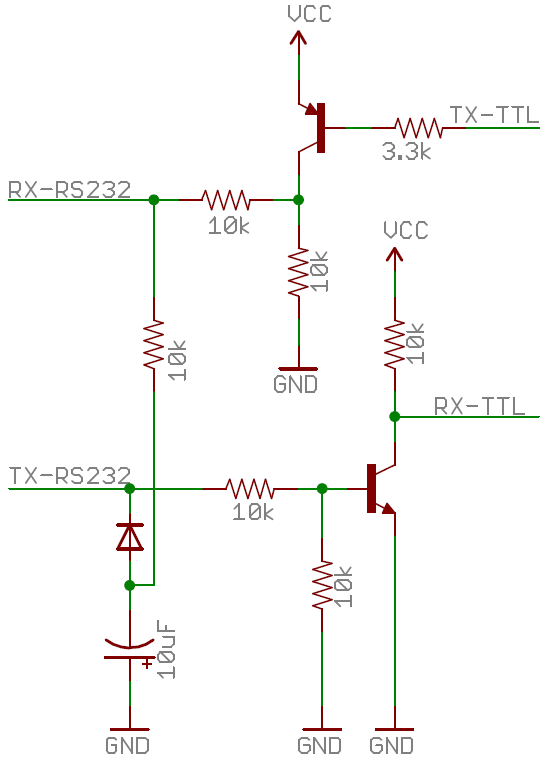 With the above information at hand, here's a quick quiz to test your shiny new knowledge:

1. What are the two main differences between RS-232 and TTL signals?

2. True or false: Data is sent from a PC's RS-232 port at 9600 bits-per-second (bps), it's converted to TTL by a MAX232 before reaching a microcontroller. The voltages of the signals look different on each end, but the speed (bps) does not change.

2. True. The data rate will always remain the same, even if the voltages of the RS-232 and TTL signals are different.

...to here to reveal the answers. Because, you know, they're so super-secret.