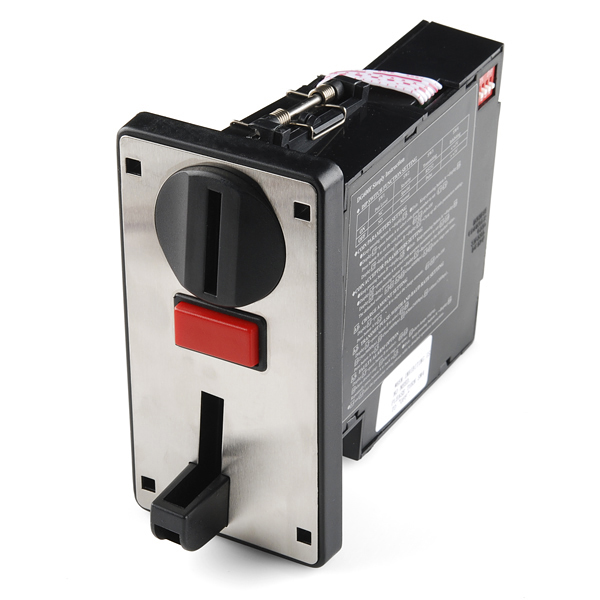 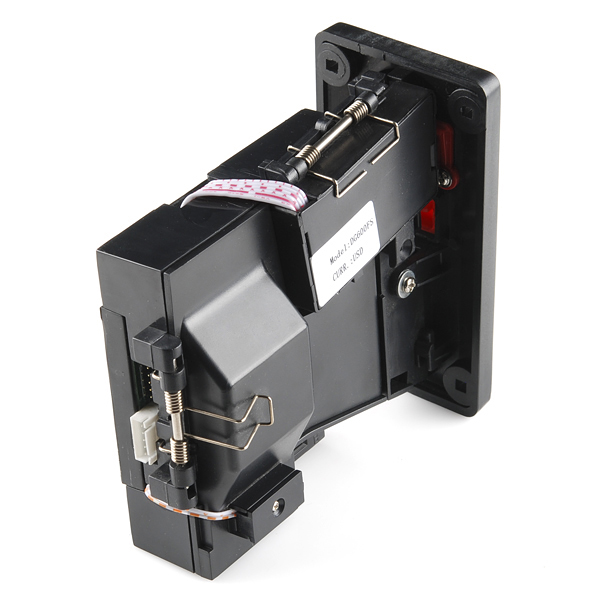 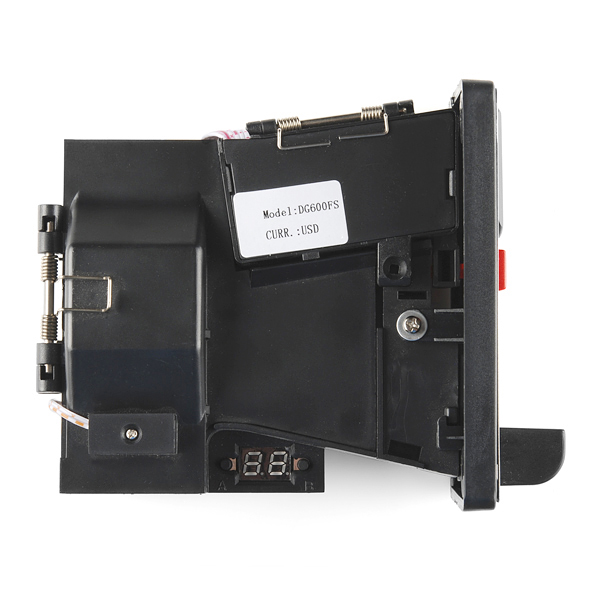 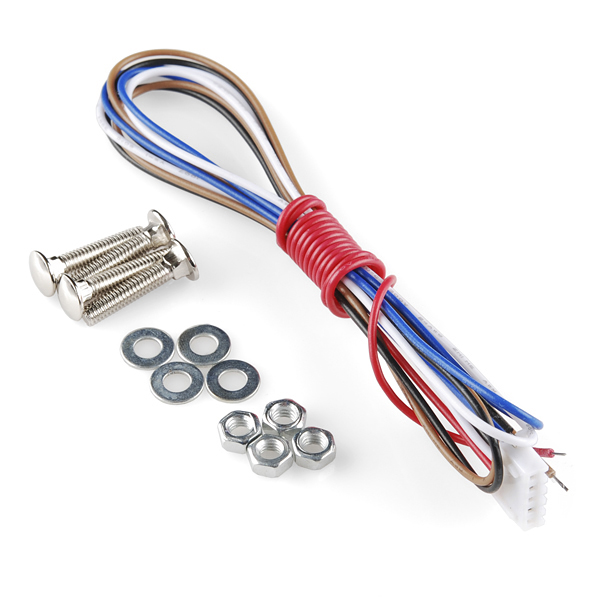 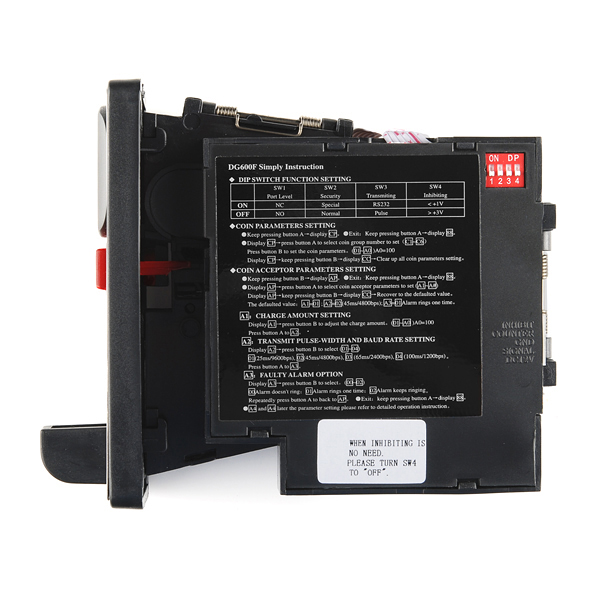 Are you trying to make a quick dime from electronics? Why limit yourself to dimes? This coin acceptor will take up to 6 different kinds of coin! Whether you're building your own arcade cabinet or just charging admission to your house, this programmable coin acceptor makes it easy to monetize your next project.

The sensors in this coin acceptor use the thickness, diameter and fall time of the coins to identify them and it's fully programmable so you're not limited to any particular type of currency. Simply use the buttons and 7-segment display on the side of the unit to select a coin profile, insert a bunch of coin samples (or the same one, over and over) then designate the value. After you've programmed the coin profiles, simply read the serial output of the coin acceptor and it will tell you the value of each coin as they're inserted. It reports these values as binary bytes and the baud rate is selectable on the unit.

This coin acceptor also has a coin reject, so your controller can tell the coin acceptor not to take any more coins, as well as a (very loud) alert beeper. All you need to get the coin acceptor working is a pocket full of change, a 12VDC supply and somewhere for the change to fall after it's accepted.

So maybe you won't get rich building your own vending machines but access control using different sizes of tokens might be cool, or even a virtual vending machine where you can buy MMORPG items. There are a ton of cool coin-operated projects just *waiting *to be built!

Example code and tutorial for the DG600F coin acceptor using Arduino and a Raspberry Pi :

If you are using the coin acceptor's interrupt outputs, try checking out our tutorial on processor interrupts with Arduino to get an idea of how to use hardware interrupts.

The demo video did not use Arduino code. Nick just connected a USB-to-serial converter to a 6-coin acceptor (calibrated with different samples for the coin denominations). By opening a serial terminal connected to the COM port (with the setting 9600 baud, 8-none-1-none), Nick was able to view the output when a coin was recognized.

If you are using a 5V Arduino microcontroller, you could check if there was serial data sent from the 6-coin acceptor's UART with a serial passthrough sketch => [ https://learn.sparkfun.com/tutorials/xbee-shield-hookup-guide#example-communication-test ]. The code was designed to pass serial data from an XBee (connected to the software serial pins) to the serial monitor. Just make sure to connect Tx to Rx and vice versa. For reference you would need to connect the ground pin for reference. Here is a summary of the connections:

Looking at the datasheet, the serial signal output (Rx) and the counter output is 5V. If you are using this with a 3.3V system (Raspberry Pi or BBB), a logic level converter or resistors for voltage division is required.

This thing is great! two of those babies were installed in my arcade machine

about 8 years ago by Member #604281 verified purchaser

I bought 2 coin acceptors. They do everything I wanted and they look great. I connected both of mine to an Arduino Micro and that is connected to my arcade machine PC.

one of the units had a malfunction. immediately after contacting sparkfun, they helped me with it. one of the best customer services I ever got!

about 8 years ago by Member #678947 verified purchaser

I purchased 2 coin acceptors for use in my Pure Water vending machine. They were much easier to program then the ones I removed. I simple told it the value of each coin then sampled them thru the coin acceptor to teach them the weight and size of each coin. I was up an running in no time. The rejection rate is very low only had a problem with really new coins that were not in circulation so the weight was a tad heavier, all the other coins it accepts fine. I Would recommend them for your next project.

about 7 years ago by 64pooka verified purchaser

Sorry you're having trouble with the coin acceptor. I'd suggest sending an email to our tech support team [ techsupport@sparkfun.com ], and they should be able to help resolve your issue.

Reliable, tougher than it looks.

I replaced a "dumb" coin acceptor with this one. The mounting holes seem to be a universal standard, but I did have to modify my faceplate to fit the rounded coin hole bezel which is above what would otherwise be a square hole, and the coin return nub at the bottom.

Programming it is fine, but it's really best to use multiple reference coins when doing so: don't just feed the same coin in over and over. It'll work, but then it'll be really picky with different coins of that type.

How did I use it? Well, I have it mounted in an outdoor facing wall at a fuel station near an air hose. I have it configured to accept $0.05, $0.10, $0.25, $1, and $2 Canadian coins. I'm communicating via serial with a Mega2560 which opens a relay to allow people to air up their tires for a certain duration (depending on how much they paid up) as well as lighting up a little LED to indicate "on".

I've had it in operation for a few months now, and it's outlived the air chuck, which is nice. It's an unfinished yard, so I expected more issues with dust, but I've never had to clean it. The only complaints I've heard from people are usually when they try to use a peso, US, or (in one case) ten pence coin, which ... well, I didn't program it to allow.

It seems expensive at first glance, but having purchased these from amusement equipment suppliers (arcade parts and the like) in the past, and considering how versatile this is, it's a very good deal.