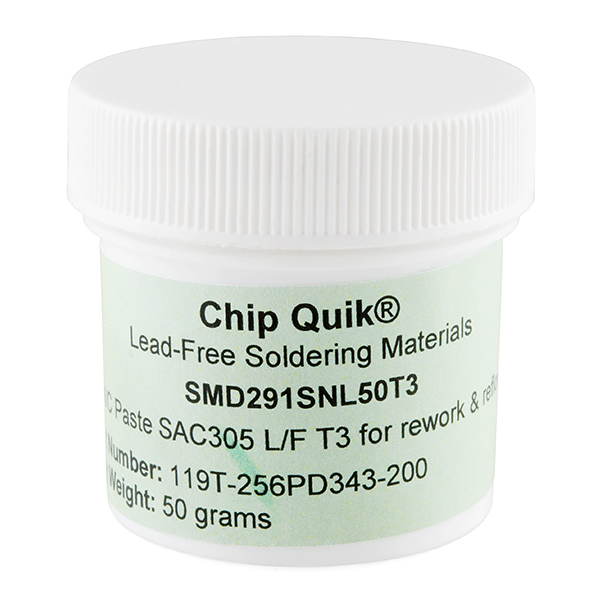 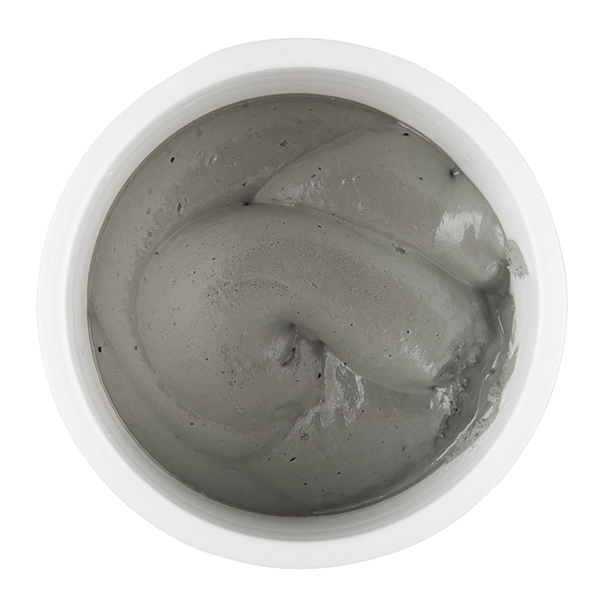 This is 50g of high quality, Lead-Free Solder Paste, the perfect amount to keep around for prototyping and hobby projects that require a bit of SMD soldering. Solder Paste Stenciling is the easiest and quickest way to solder some of the trickier SMD components. Here at SparkFun, we use solder paste stenciling on pretty much all of our boards. It saves us a lot of time. But stenciling takes more than just a stencil and a dream... you're going to need some paste.

Note: Although this Solder Paste comes in 100g containers, it contains 50g of paste. The container is not intended to be full.

Solution to all the problems I didn't know I had.

about 8 years ago by Member #30838 verified purchaser

I've been prototyping my own PCBs for nearly a decade now. Lately I've been getting all bent out of shape as components get smaller and smaller, but I can't figure out how to use them because the packages hide the pins (QFN, BGA, MLP, MicroFET..).

I'd spent a lot of time making footprints larger than the packages so that I could solder one pin, and then wick the rest. But this was a mess, and often didn't work on the first try (which means it only gets worse from there).

And then I got a stencil and tried this stuff. It's just completely magical. You smear it all over the design the table top and maybe some on the dog, but when you apply heat the surface tension just draws it back onto the pads (as long as you don't have too much it works fantastic).

I watched the video, and bought a little $15 hot plate. That works great but I'm not sure I needed it. I've also tried the hot-air-gun approach and I actually like it better because it offers a bit more control. The hot plate has a lot of thermal capacitance that gets carried away, and makes things a little more complicated to control. The paste is tacky enough that parts don't just blow all over the place if you're conservative with the airflow. Also the hot air gun seems to make more sense for 2 sided designs (which is sort of a necessity with two layer boards)

50g seems like it should last a lifetime, but we'll see how long it keeps in the fridge.

Anyhow, Good job sparkfun: you rock. Making my life easier, keep it up. I like that.

PS The dog was meant to be hyperbole. Don't do that.

about 8 years ago by 49002 verified purchaser

this works VERY well with my brand new Spark Fun, hot air rework station. now I can get to the work I have been saving. Thank you

about 8 years ago by Member #666413 verified purchaser

Finding the right solder paste for small SMD rework applications was tricky, until I found this product. It's easy to work with, and goes a long way.

about 7 years ago by vvelu verified purchaser

As advertized and much easier to use on SMDs.

Good quality, soldering smd is very easy with this paste.

about 4 years ago by Stephb verified purchaser

This is my first paste for SMD. I am using a stencil with this product and it works great. Easily clean your tools with a paper towel and a bit of isopropyl alcohol if you need. Keep cool after opening.

about 6 years ago by Member #329318 verified purchaser

Used it to solder all my SMD with hot air. This quantity is enough to do thousands of clean solder. use it and never revert back to awkward "classic" soldering

about 5 years ago by Doug Wyman verified purchaser

As this was the first time I had done hot air SMD soldering I can't rate this against anything else but I have done conventional soldering for 60 years and this is so easy I was amazed.

Stays put and melts when you need it

about 8 months ago by Member #814451 verified purchaser

My first SMD PCB project benefited from the paste. I used a stencil from my PCB provider and just a little bit of paste. The paste was easy to spread and had a consistent density. While I took my time to lay out my parts, none of the paste moved. I soldered all of my components with a hand-held iron at 700 degrees.