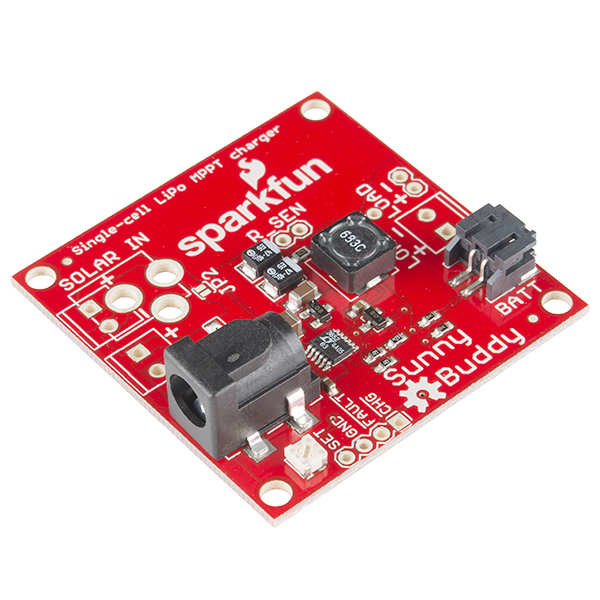 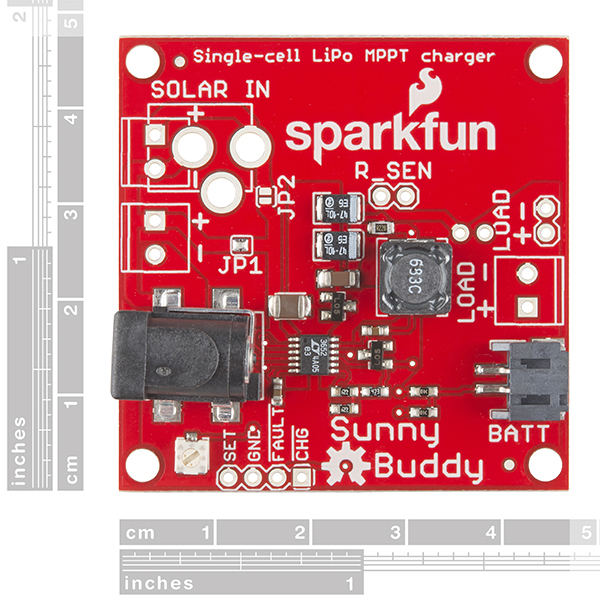 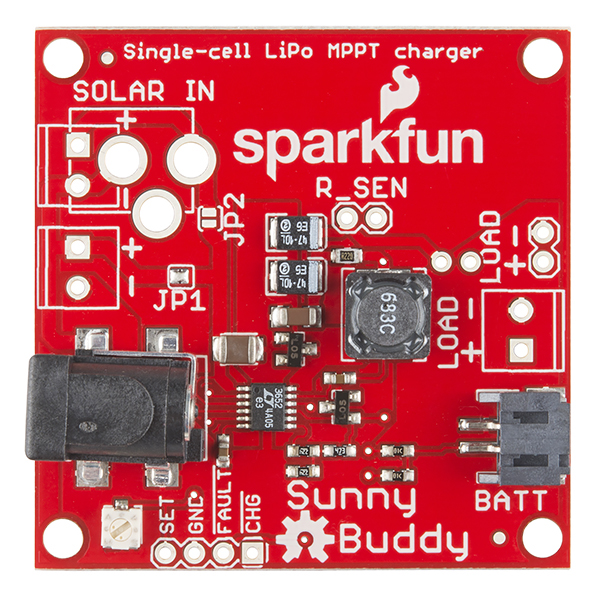 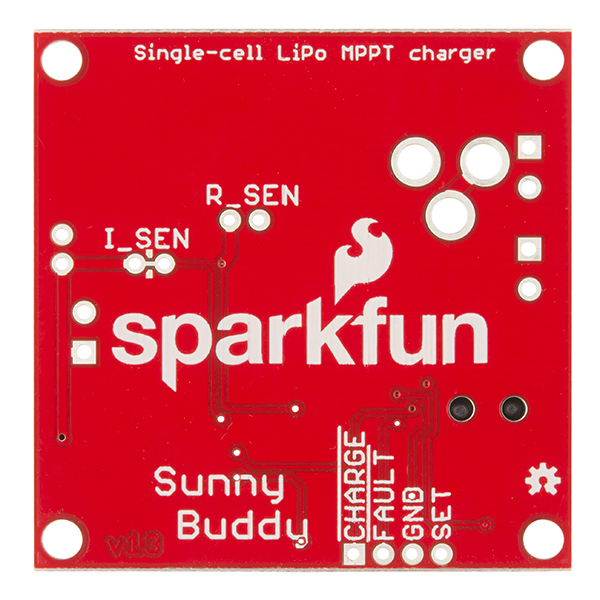 This is the Sunny Buddy, a maximum power point tracking (MPPT) solar charger for single-cell LiPo batteries. This MPPT solar charger provide you with the ability to get the most possible power out of your solar panel or other photovoltaic device and into a rechargable LiPo battery. Set-up is easy as well, just plug your solar panel into one side of the Sunny Buddy and your battery into the other and you are good to start charging!

Each Sunny Buddy comes equipped with a LT3652 power tracking 2A battery charging circuit and pre-installed barrel jack and 2-pin JST connectors with unpopulated areas to install your own personal 3.5mm screw terminals for added input/output options. This revision also adds a potentiometer to the input to set the holding voltage for MPPT and we've also tweeked the feedback resistors on the output to change the float voltage.

What does a baby elephant weigh? How much impact force does a jump have? Answer these questions and more by building your very own IoT industrial scale using the SparkFun OpenScale.
Favorited Favorite 9

Build your own open-source, official Wunderground weather station that connects over WiFi via an Electric Imp.
Favorited Favorite 32

about 5 years ago by Member #984253 verified purchaser

A little introduction is in order;

This part was used in a company project in Cheyenne, Wyoming. For the month prior to its installation, we'd been having trouble with power outages of the project, a solar-driven sensor, and finally a decision was made to massively boost the power supply by a factor of 10x to provide enough electricity. However, that meant using solar panels with a nominal voltage of 25 volts and a maximum current of 6 amps.

The datasheet on the driving chip mentioned a max input voltage of 40V and a nominal input voltage of no more than 32, so all good there. It also mentioned that the charger only allowed switching current until the voltage on the SENSE pin was reached. I'd soldered a 0.075 9W resistor into R_SEN, limiting its current output to a max of 4.5454 amps (exceeding the output current) and proceeded with the assumption that the IC would automatically limit its output current even if it could produce more.

I was correct. Though the current output reached the inductor's saturation levels and thus stopped it behaving like a true inductor, the Sunny Buddy caught the passed-through voltage and cut off the power supply (thus preventing the 25 volts from hurting anything on the output side). It's exceeded my expectations in performing and, to give all those out there an idea of how robust it is, is currently connected to a 100W solar panel display and a 6600mAh battery (along with the load).

So long as you don't exceed the maximum recommended voltage input don't worry about the current drawn; the Sunny Buddy automatically limits that. It's much better than the current Adafruit solar charger and will be my go-to from here on out.

about 7 years ago by Member #529167 verified purchaser

I bought this board to use with the Large Solar Panel from this site. It's been really interesting to experiment with. The flexibility of the footprints on the board is really nice because it allowed me to attach terminal blocks to the inputs so I could connect the panel voltage to one and a current sensor to the other. Great!

One suggestion for this board: consider adding an independent voltage input to the set pin so that the MPPT can be managed by a controller.

Keeps output below 4v, but I wish the NTC pin went somewhere...

about 6 years ago by Member #90144 verified purchaser

This charger was great for me - one feature not described in many chargers is whether the charger will always output 3 volts even if the solar panel voltage goes above that. I tried a few other chips which all listed passing through the panel voltage as a feature. This is actually big design annoyance for 3v devices. However, the sunny buddy will always output max 4v even without the battery plugged in, even when charging , even when the solar panel voltage goes to 15v. Great!

The big issue for me with this device is the NTC pin for the thermistor is NOT broken out. For weather stations and things which are outside (where you would use this device) you should not charge below 0C. The chip has a pin deticated to reading a 10K thermistor to prevent charging above 50C? and below 0C. Even if this pin went to a small via it would be great, but it is actually just a pad. TL;DR; if you want to connect a thermistor be prepared to solder some small stuff. http://i.imgur.com/9qU4mYC.jpg

about 7 years ago by Member #496446 verified purchaser

I originally bought this for a project specifically running off solar, but I knew I was going to make multiple ones, so cost is a bigger factor than just a one-off. I had to read up on various charging methodologies and how they impact charging speed & battery longevity. On the surface MPPT seemed perfect, but after doing a few sample runs, I settled on a non-mppt solution. Did this board work? Absolutely. Did this board work well? Absolutely. Would you recommend this board? For someone needing MPPT charging, Yes.
The board I bought is in service, and doing it's job, and doing it well. I wish it had some better monitoring on-board. (ie: battery status). If you're building one unit and need to pick a charger, this is a great choice, if you're looking to build a bunch where price can add up; mppt might not be the cure-all. Personally, I like the rocketscream boards for when solar charging is needed.

about 7 years ago by fratti verified purchaser

While I haven't used it extensively so far, preliminary testing seems to confirm that it does what it says it does, and quite well.

There are a few minor inconveniences though. The first one being that the jumpers for configuring the amount of panels attached aren't actual jumpers, but pads that are solder-bridged. While it certainly keeps the cost down this way, it makes it somewhat of a hassle to change the setup quickly (unless you're the kind of person who always has a hot soldering iron nearby).

The second minor annoyance is that for tuning it right, you have to hold the multimeter probes onto the SET and GND pads, but the pads are so small it's easy to slip off with the probes in one hand while trying to tweak the little knob with the other. Though this could also be the fault of my probes, or my hands.

While a bit bare on the side of soldered-on components, it definitely does what you want it to do.

about 2 years ago by Member #308887 verified purchaser

I bought this because I wanted an off-the-shelf solution. I didn't want to read the LT3652 datasheet. I didn't want to look at schematics. Of course I ended up doing just that. I feel like if the documentation were just a little better, everything could have been a lot easier. Most of my problems revolved around the set voltage. The directions said to set it to 2.8V with the panel in direct sunlight. The cutoff is around 2.7V which pretty much guarantees it will ONLY charge in direct sunlight. For whatever reason (insert lawyers name here), the float voltage was set to 4.0V. I'm not sure why it wasn't set to 4.2V for LiPo, effectively robbing you of about 40% of your battery capacity. Since I did have to look at the schematics, please allow me to make the following suggestion. Reference designators are only useful if you put them on the board. On this board there is ample room for reference designators on every part. Makes debugging a lot easier. LED's on the charge and fault pins would have been a nice touch.

Very helpful for our students

about 6 years ago by Member #853814 verified purchaser

In the education, how the use solar energy in consumer applications it a very compact device with excellent instructions

Sunny Buddy is really the best product of its kind available on the market today. But there is a problem. The LT3652 chip supports battery temperature monitoring using NTC, which is important for LiOn battery safety, but the Sunny Buddy for some unknown reason has this pin inaccessible, no track connected to it.

Regardless of this minor flaw, the product is amazing and worth it.

Good but could be better

about 3 years ago by Member #273747 verified purchaser

It would be better if it had a fuel gage with an I2C interface.