Collecting power from the sun is not difficult, but budgeting the total power consumption for your system will lead to many design choices.

Light contains energy. When light hits a conductor (or semiconductor) some of the energy is translated into moving electrons, creating current. We can harness the current using solar cells (aka photovoltaic cells). When the sun shines on a solar cell, the current output is mostly constant, which is known as direct current, DC. DC is easy to use and great for charging batteries and powering microcontrollers, but using DC from solar cells can be tricky. 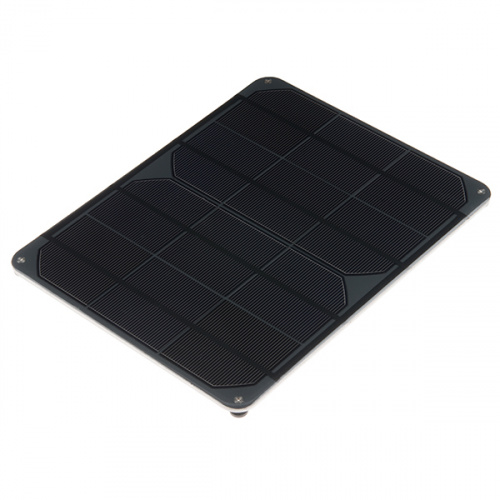 Have a project that needs some good power? Do you like free power provided by our friend, Mr. Sun? Check out this high qualit…

Solar panels come in many varieties. When shopping for solar panels for your system, there are a few specifications you need to follow. The specs below will refer to the Solar Cell Huge, shown above.

Thanks to pveducation.org for the graph.

The sweet spot for operation is called the maximum power point (top of blue curve) and is around 8V @ 650mA for this specific panel. Sophisticated solar power systems use MPPT controllers to monitor and balance the system to maintain the max power point. To check if your system is at this point, simply measure the voltage on the solar cell with your load attached to see if you are close to 8V. It isn't too big of a deal if you are not exactly at the maximum power point, the panel will still work, but you will be losing efficiency. Notice, in our testing, we saw 550mA short circuit (Isc), which is outside of the maximum power point.

If you wanted to use this solar panel to power your RedBoard, make sure the voltage regulator can handle at most 10V on the input (which it does). It is almost this simple. Realistically, the solar panel will not be in direct sunlight most of the time and the panel could provide as little as 100mA or less on shady days. The RedBoard running the blink sketch (blinking the on board LED) draws a peak current of 60mA. This setup will not allow much room for additional hardware, due to the inconsistent and limited power draw from the panel.

Another design choice for solar power is to use the Energy Harverster board.

The Energy Harvester board is simply an efficient voltage regulator with an input window that allows charge to accumulate on a battery or supercap, up to a defined voltage, before turning on and powering your system.

In this setup, supercaps are attached to the input to give more control over when and how much power is delivered to the output at 3.3V. Supercaps act in similar ways to batteries, however they don't hold charge as well, but they do last through millions of charge and recharge cycles. The above design uses 4, 2.5V supercaps in series to equal a 10V rating. The Schottky diode is in there to prevent the caps from sending current back to the panel once charged.

As sun shines on the panel, the supercaps begin to charge. If you measure the voltage on the caps, you should see the voltage slowly increase from 0V as more sunlight hits the panel. When the supercap is charged over a certain voltage (between 4V and 5V, defined by the rising UVLO threshold, see page 3 in datasheet), the board will turn on, the caps will discharge through the board and output a regulated 3.3V to power your system. This is nice, because it allows a defined amount of charge to accumulate on the input caps and when the voltage hits a certain level, they are discharged through the board to power your system. The more capacitance you have on the input the longer the board will run, but the caps will take longer to charge. You can think of this system as supplying bursts of power, when it becomes available.

An simple application of this setup is a simple solar power robot using the Ardubot (no microcontroller required). 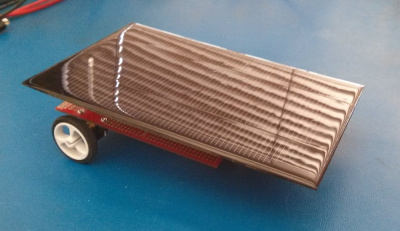 When the input capacitors charge up, the motors turn and propel the beast forward, until the caps deplete and everything is turned off. Once the caps charge again, the motors turn on and the cycle repeats. FOREVER. Well, maybe not forever, but much longer than the life of any battery! Whisker switches can be attached to each motor control to steer.

Here are some things to watch out for when designing for low power:

The uses for solar power are many and diverse. Let us know how you used solar in your project!